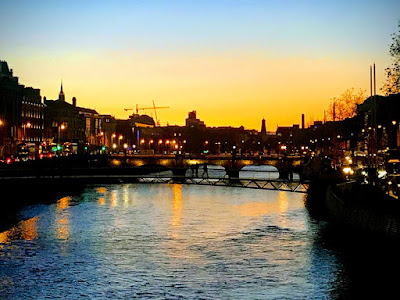 I was writing over the past few days about two poems by Philip Larkin: ‘The Trees,’ written in 1967 to mark the birthday of Thomas Hardy and included in his book High Windows in 1974; and ‘Church Going,’ which was published in The Less Deceived (1955), and which I argued was inspired not by a visit to a church outside Belfast, as has been stated by many critics, but by a visit in 1954 with his mother to the grave of his father, Sydney Larkin, in Saint Michael’s Churchyard, Lichfield, and visits that same day to Saint Michael’s Church and Lichfield Cathedral.

The Less Deceived, which includes the poem ‘Church Going,’ is Larkin’s first mature collection of poetry and was published in 1955. However, a year earlier, in 1954, this collection was rejected by the Dolmen Press in Dublin for being ‘too self pitying’ and ‘too sexy.’

Larkin was then working at the Queen’s University of Belfast, and the English poet Donald Davie (1922-1995), then a lecturer in English at Trinity College Dublin, had urged Larkin to submit his work to Dolmen Press, founded in 1951 by Liam and Josephine Miller to provide a publishing outlet for Irish poetry.

Zachary Leader later identified two members of the selection board at Dolmen Press who rejected his work: the Dublin poet and translator Thomas Kinsella, translator of The Tain, and Sean White (1927-1977), editor of the literary magazine Irish Writing.

Instead, the collection was published in Hull in 1955 by Jean and George Hartley under the imprint of the Marvell Press; at the same time they were publishing the literary review Listen, whose contributors included Kingsley Amis, Robert Conquest, Donald Davie, John Wain, and also, in almost every issue, Larkin.

High Windows, which includes the poem ‘The Trees,’ was published in 1974. Other poems in this collection include ‘Dublinesque’ written 50 years ago in June 1970, following Larkin’s visit to Dublin with Monica Jones in 1969, after he had received an honorary doctorate in Belfast.

In Dublin, Philip and Monica returned to locations they had known in the early 1950s, including tea in the Shelbourne Hotel and visits to the National Gallery of Ireland and Trinity College Dublin.

Noticing that Ireland was now a changing country, Larkin reflected 50 years ago that Ireland was no longer ‘(a) remote … (b) censor ridden – News of the World and Ulysses available … (c) poverty stricken – all houses seem freshly done up and there are no barefoot children etc (mostly riding bicycles anyway).’

But, unlike the citizens of the older Dublin, those of the modern capital were no longer ‘courteous’, he recorded in his Holiday Diaries (1969), ‘as I’m sure M[onica] would add … having been bunted to and fro on Dublin pavements.’

Ireland had changed – in the Republic at least, though not in Northern Ireland. it seemed to him more like Britain – but he was unable or unwilling to voice his feelings about this, at least until June 1970 when he wrote ‘Dublinesque.’

He sent the draft to Monica Jones, claiming it originated from ‘an odd dream – I just woke up and wrote it.’ But she would have known that it was distilled from what they had felt nine months earlier in Ireland.

However, the ‘ankle-length dresses’ of the street women were from a by-gone era rather than the 1970s, the street scenes were more Victorian than modern, the funeral evoked James Joyce’s descriptions of Dublin, and the time of day seems to be autumnal rather than high summer. Was this not Molly Bloom? Was this not Paddy Dignam’s funeral in Glasnevin in Chapter 6 of Ulysses, where Bloom decides to reject morbid thoughts and embrace ‘warm full-blooded life’?

I just wondered for a moment, as I engaged with his description of ‘stucco sidestreets,’ whether he had ever visited the now long-lost Irish House on the Quays, with its stucco work by my great-grandfather, James Comerford (1817-1902) and William Burnett.

The Irish House was built on the corner of Winetavern Street and Wood Quay in 1870. The pub was demolished in 1968, a year before Larkin’s return visit, to make way for the new Dublin Corporation Civic Offices. Before its demolition, the majority of the stucco friezes by Comerford and Burnett were removed and put into storage. They are now in the possession of Dublin Civic Trust.

Down stucco sidestreets,
Where light is pewter
And afternoon mist
Brings lights on in shops
Above race-guides and rosaries,
A funeral passes.

The hearse is ahead,
But after there follows
A troop of streetwalkers
In wide flowered hats,
Leg-of-mutton sleeves,
And ankle-length dresses.

There is an air of great friendliness,
As if they were honouring
One they were fond of;
Some caper a few steps,
Skirts held skilfully
(Someone claps time),

And of great sadness also.
As they wend away
A voice is heard singing
Of Kitty, or Katy,
As if the name meant once
All love, all beauty. 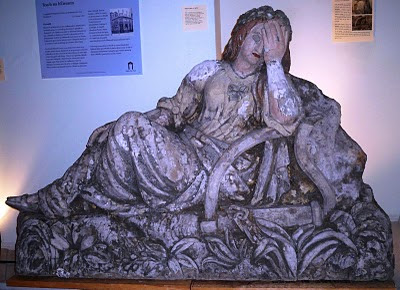 Erin and her stringless harp … a surviving portion of James Comerford’s stucco frieze on the Irish House (Photograph: Patrick Comerford)