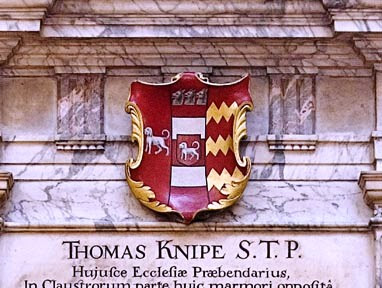 I wondered why the Comberford arms appeared on Canon Thomas Knipe’s memorial in Westminster Abbey … how was I going to answer this question?

The 300-year-old memorial to Thomas Knipe in the south choir aisle of Westminster Abbey has challenged me with a conundrum in Comerford and Comberford genealogy for some years. It puzzled me again when I was back in Westminster Abbey earlier this year.

Thomas Knipe was educated at Westminster School and Christ Church, Oxford, where he graduated BA (1660), MA (1663), BD and DD (1695), and he became the second master at Westminster School in 1663. He published Greek and Hebrew grammars for use in the school, and succeeded Dr Richard Busby as headmaster in 1695. He became a prebendary or canon of Westminster Abbey in 1707, and was also a Prebendary of Exeter (1697-1705).

When Thomas Knipe died at Hampstead on 6 August 1711, he was buried in the north cloister of the abbey with his two wives, Anne and Alice. His sister Mary and his brother Christopher, who died in childhood, are also buried there. The gravestone inscription is no longer readable but was recorded in 1723. 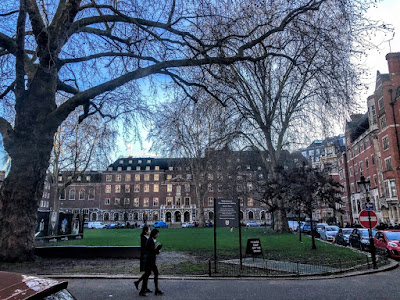 However, his monument in the form of a large tablet in in the south choir aisle has long puzzled me, as it appears to claim that his first wife Anne, who died on 24 August 1685 was a Comerford or Comberford heiress. She is not named in his entry in the Dictionary of National Biography, and she is named incorrectly on the abbey website, where it says she was ‘a granddaughter of Sir Thomas Worseley and sister of Helen, wife of Bishop Thomas Sprat.’

However, Sir Thomas Worseley’s name is spelt incorrectly and is misleading: there were Worsley baronets from 1611 to 1825, many of them MPs for the Isle of Wight, but none of them was called Sir Thomas.

Knipe’s second wife Alice, who died in 1723, is named as ‘the widowed Alice Talbot,’ but neither her original family name nor the name of her first husband are provided.

In addition, I was puzzled by the heraldic details on Thomas Knipe’s memorial in Westminster Abbey, which seemed to imply that his first wife was a Comerford or Comberford heiress.

Thomas Knipe’s coat of arms on the memorial can be described in heraldic language as: ‘gules, two bars and in chief three wolves’ heads, all argent, an escutcheon of pretence gules, a talbot passant argent.’ That is, a red shield with two white bars and three white wolves’ heads at the top, superimposed at the centre with a red shield with a white walking dog.

The arms on the heraldic left (sinister, or the viewer’s right) are the arms of Alice Knipe’s family, and not the Talbot family. Her son, and Thomas Knipe’s stepson, was the Revd James Talbot (1664-1708), Regius Professor of Hebrew at Cambridge (1699-1704), Fellow of Trinity College Cambridge, Rector of Sutton (1692-1705), near Shrewsbury, in the Diocese of Lichfield, poet, writer on music and a friend of the composer Henry Purcell. Talbot was educated at Westminster School and was ordained by Thomas Sprat, Bishop of Rochester.

The Knipe memorial in Westminster Abbey

I was certain that Knipe’s first wife Anne was a member of neither the Knipe family nor the Worsley family. I have yet to identify Alice’s birth family. The monument in Westminster Abbey was erected by ‘his second and most afflicted wife’ and so I wondered for many years whether the Talbot family name had helped to create confusion with the Comberford family’s heraldic talbot.

But recently, I accidently came across Anne’s actual origins. She was born not Anne Worsley but Anne Wolseley, a daughter of Colonel Devereux Wolseley (1617-1648) and Elizabeth Zouche.

Devereux Wolseley was born at Ravenstone, Leicestershire, and was baptised in Saint Michael and All Angels’ Church, Colwich, near Wolseley, between Rugeley and Stafford in Staffordshire, on 24 November 1617. He was a royalist colonel during the English Civil War in the mid-17th century, and married Elizabeth Zouche, daughter of Sir John Zouche.

Anne Knipe’s grandfather was Sir Thomas Wolseley (1564-1630), who was born at Wolseley, a son of Erasmus Wolseley and Cassandra Gifford. He was married three times, Grace Gresley, Anne Moseley and Helen Broughton. When he died in 1630, he was buried in the chancel in Colwich Church, near Wolseley.

So, the Comberford or Comerford arms on the Knipe memorial should be the Wolseley arms, in which the colours are inverted: argent, a talbot passant gules (white, a red walking dog). The Comberford and Wolseley families were part of the same nexus of Staffordshire families, related through intermarriage with the Fitzherbert, Stanley, Beaumont, Gifford and other families.

The heraldic conundrum in Westminster Abbey had been resolved with just a little genealogical research. But who is going to reverse the colours on the Knipe memorial? 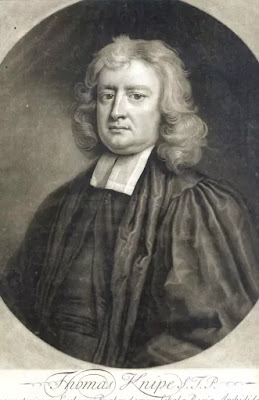 I'm a Knipe, and discovered Thomas Knipe through records my family has kept throughout the generations. This definitely answered a few questions of mine, great research.