Who was the boy in
the Warsaw ghetto with
his hands in the air? 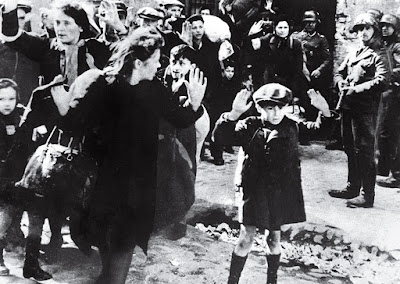 I should be in Warsaw today [25 May 2020] on a three or four-day city break. But for the second time in just over two years, I have been forced to abandon plans to visit the Polish capital.

The package to Warsaw, with Ryanair flights and Airbnb accommodation, was a Christmas present, and I was due to fly out today and return on Thursday. But the travel restrictions introduced as a response to the Covid-19 pandemic have cancelled all these arrangements, and I now wonder when or whether I am ever going to visit Warsaw.

Two years ago, I had booked a three-day visit to Warsaw in early March 2018. That would have been my second visit to Poland, following a city break in Kraków and Auschwitz at the end of 2016. But the ‘Beast from the East’ and ‘Storm Emma’ made a motorway journey to the airport too risky that year, and Warsaw was transferred to my wish list.

I particularly wanted to visit Warsaw this year and to visit the sites of the Warsaw ghetto uprising on the 75th anniversary of the end of the Holocaust and the end of World War II.

We all have photographs that have stayed with us as haunting memories from our childhood, and my two are an image of Adolf Eichmann behind a Perspex screen during his trial in 1960, and the photograph of the terrified young boy with his hands raised in the Warsaw Ghetto.

He was one of half a million Jews packed into the Warsaw ghetto, transformed by the Nazis into a walled compound of starvation and death.

The partisans were poorly armed as they fought back but were eventually defeated by German tanks and flame¬throwers. When the uprising ended on 16 May 1943, the 56,000 survivors faced summary execution or deportation to concentration camps and slave-labour camps.

The Great Synagogue of Warsaw was one of the grandest 19th century buildings in Poland and was once the largest synagogue in the world. It was designed by the architect Leandro Marconi and stood on Tłomackie Street. It opened on 26 September 1878 at the celebration of Rosh Hashanah, the Jewish New Year.

Stroop was decorated with the Iron Cross and then sent from Warsaw to Nazi-occupied Greece in September 1943, before being recalled to Germany.

Poland was once Europe’s Jewish heartland; 90 per cent of the 3.3 million pre-war Jews there had been wiped out by 1945.

The Great Synagogue was not rebuilt in Warsaw after World War II. Since the 1980s, the site has been occupied by a large skyscraper, once known as the Golden Skyscraper and now known as the Blue Skyscraper.

The identity of the boy in the photograph has never been confirmed. But he has become one of the well-known faces of the six million Jews murdered by the Nazis in the Holocaust.