A photograph emerges of
a former Comerford house
in Courtown, Co Wexford 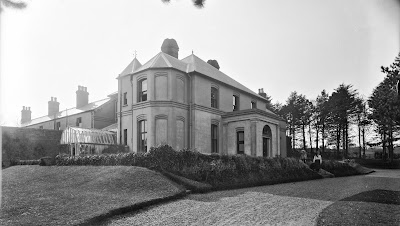 Invermore House, Courtown, Co Wexford … built for the Earls of Courtown, and once the home of Eva Mary Comerford and her daughter Máire who ran a school there (Photograph: Patrick Comerford)

Almost a decade has passed since I went in search of the house in Courtown, Co Wexford, where Eva Mary Comerford and her daughter, the Irish revolutionary journalist Máire Comerford, had lived in the early decades of the 20th century.

I had failed to in my attempt to add to my collection of images of Comerford family homes, and left disappointed, having found only an empty field and a pile of rubble in where Invermore House once stood.

But a comment posted early on Monday morning (22 June 2020) by an anonymous reader on that blog posting describing my fruitless search over eight years ago (27 January 2012) has helped me to find a photograph of Invermore House where these two Comerford women, mother and daughter, lived and ran a private school over 100 years ago.

For many years, a photograph in the Eason Photographic Collection in the National Library of Ireland (NLI Ref: EAS 3736) had been titled ‘Mansion near Gorey, Co Wexford.’ The photograph was taken by an unknown photographer in the first few decades of the last century.

However, a Flickr Commons user known only as B-59 was the first person online to identify the front door and this research has established that this is Invermore House or Levuka House, Courtown, Co Wexford.

The house was designed in the 19th century by Thomas Newenham Deane and built for the Scott family. At times, it was known as Levuka, and later as Invermore, and for a time it had been the north Wexford home of Eva Mary Comerford and her daughter Máire.

For a time after her husband’s death, Eva Mary Comerford lived with her brother, Thomas Louis Esmonde (1864-1918) of Gorey, Co Wexford. In 1913, Thomas married Mary Mansfield, and Eva’s daughter, Máire Comerford (1893-1982), returned to Ireland from London around 1915 to live in Co Wexford with her widowed mother, uncle and aunt.

Eva Comerford and her daughter Máire (born Mary Eva Comerford) then rented Invermore House in Courtown, Co Wexford, and there they set up a school for girls, where Máire was a teacher for a time. Despite her strong Republican politics, Máire Comerford was the second cousin of three baronets who were elected as Fine Gael TDs for Co Wexford: Sir Osmond Esmonde (1896-1936), the 12th baronet, Sir John Esmond (1893-1958) and Sir Anthony Charles Esmond (1899-1981).

Invermore House, standing on a ridge overlooking Courtown Harbour, was designed by the architect Sir Thomas Newenham Deane (1828-1899), and was built in 1859 as a house for M. Scott, the land agent of the Earls of Courtown. The architectural historian Frederick O’Dwyer says Dean ‘was probably Lord Courtown’s architect on other improvements in the village, including the erection of a row of four cottages … and a covered well in the middle of the main street.’

After Eva Mary Comerford and her daughter Máire moved out, the house was sold in 1919 behalf of George FW Stopford.

The photograph of Invermore House taken before that sale, just a short time after the Eva and Máire Comerford had lived there. A delightful detail in the photograph is the two young girls waiting at the front door. There is some discussion on social media about their identity.

Although George FW Stopford is not living there in 1911, his daughter Cynthia Mareli Mabel Stopford, who was 11 in 1911, may be one of the girls, and the other girl may be her older cousin Edith (19); or they may be Cynthia in 1916 and her younger cousin Marina Marjorie, also known as Lady Marjorie Gertrude Stopford (1904-1996).

There was another sale of household goods in the house in 1944. The lengthy list of goods being auctioned seems to include everything in the house which could be moved, including beds, cookers, china and golf clubs.

As time moved on, the house changed hands many times. It became an hotel in 1947, and was known by several names over the years, including the Oulart Hotel, the Sands Hotel and the Stopford House Hotel. However, like most hotels in Courtown, it fell on hard times in recent decades, was closed, and was demolished.

All that I could see when I visited in January 2012 was a heap of rubble and a clump of trees in a fenced-off field near two small housing estates. Nothing is left of the stepped arches over the windows, the pyramid-shaped roof, the classical porch, the Gothic entrance arch, the elaborate fretted balusters on the main and secondary staircases with their plant and animal motifs, or the courtyard at the rear with its eclectic design executed in local red brick and the outbuildings with carved bargeboards.

The once-planned apartments were never built on the site, and there are no traces of the forgotten grandeur of a house that once played a minor role in Irish architectural and political history. 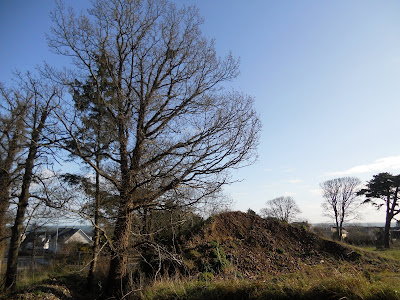 The heap of rubble I found in 2012 on the site of Invermore House (Photograph: Patrick Comerford)