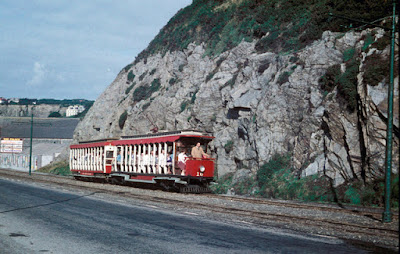 Onchan Head in the 1960s … my first experience of staying in an hotel and ‘island hopping’ (Photograph: Wikipedia / Dr Neil Clifton)

I am still wondering whether I am going to get to Greece later this year. Any possible government announcement about an ‘air bridge’ has been postponed once again.


Ryanair keeps advertising that it is flying to Thessaloniki. Although I booked this journey late last year, all does not seem secure. Even if an ‘air bridge’ is agreed between Ireland and Greece, am I going to feel reassured enough to go ahead with a planned holiday in Halkidiki in late August and early September?

I mused, until a few days ago, that the ‘R’ factor in Greece is lower than it is in Ireland, and that perhaps I would feel as safe there – if not safer – than in Ireland.

But the arrival of people like Stanley Johnson, and his casual, Trump-like – well, Johnson-like – response to questions, makes me wonder what if … what if, later this summer, the beaches of Greece become like the beaches at Bournemouth and Southend?

Of course, the expectation of the journey has its own pleasure that does not actually depend on arriving at the destination. As the Greek poet CP Cavafy says in his poem Ithaka:

Keep Ithaka always in your mind.
Arriving there is what you’re destined for.
But don’t hurry the journey at all.
Better if it lasts for years,
so you’re old by the time you reach the island,
wealthy with all you’ve gained on the way,
not expecting Ithaka to make you rich.

But, as I thought about these prospects in recent days, I realised that it was 55 years ago – probably this month, although I am unsure – that I first ever went ‘island hopping’ or stayed in an hotel.

It was 1965, July or August, and I was a 13-year-old who had just realised the fun and joy of being a teenager by the sea.

My father normally took a house in the summer months on the east coast, within commuting distance of Dublin and close to a golf course, so that he could commute to work in the day, and spend the evening playing golf, leaving us to our own devices and creative imaginations throughout those long, balmy days. I still remember episodes in Bettystown, Kilcoole and Termonfeckin that I am sure my parents were never aware of.

But, for some reason, there was a change of locations 55 years ago, and we all caught the ferry to the Isle of Man and spent that family holiday in an hotel in Onchan, overlooking Douglas Bay.

I cannot remember the name of the hotel, but I can remember it was at the end of a terrace of Victorian buildings, above the rocks of Onchan, and I can remember some of the hotel’s guests or residents. There was a veteran from the Battle of El-Alamein, fought in 1942 who entertained me with stories of Monty’s Eighth Army and how they defeated Rommel’s Desert Rats. It was only 23 years earlier, so he may have been only in his early 40s, perhaps even in his late 30s. But, as my father played golf and my mother played bridge, he brought many of my comic-book stories to life.

There was a couple who were convinced that two jobs were safe in life: the binman’s and the milkman’s. Who could invent a machine that would walk up the garden path, take the empties and replace them, or bring the bin down to the waiting cart. I can’t imagine they were recommending a career path for a young teenager; nor could they predict the future … although I only know that with the benefit of hindsight.

Keith was a boy of my age from Haywards Heath. I think his father was a vicar or a lay reader, and he took me to Saint Catherine’s, the Anglican parish church, with its beautiful rood screen and Celtic crosses – this is where Captain William Bligh married Elizabeth Betham.

Keith and I kept in touch with each other for a long time … well, at least until the following Christmas.

I took a delight that only teenage boys appreciate in the local names, such as Windy Corner, Molly Quirk’s Glen, and The Butt, I visited the TT course and saw some of the practice runs, I almost frightened myself when, after pretending I was older, I tried mini-kart at the Onchan Pleasure Park, where I also went boating, I searched for tail-less Manx cats and tried to send others in search of three-legged Manx residents.

I made my own way by bus to other towns on the island, including Castletown, Peel, Port Erin, Laxey and Ramsey, and Tynwald, and spent hours on the promenade and the beach at Douglas. On a more serious note, I was introduced to the horrors of the Holocaust at Madame Tussaud’s in Douglas.

Mutiny on the Bounty had been a hit film three years earlier (1962) and Lord of the Flies (1963) was still showing that summer.

It was the year of the Selma and Montgomery marches, the year TS Eliot died, the year Liverpool beat Leeds 1-0 in the FA cup final. The Rolling Stones could get no Satisfaction, Bob Dylan went electric and had a hit with ‘Like a Rolling Stone,’ Elvis Presley was crying in the chapel, the Beatles played at Shea Stadium, Petula Clarke was downtown, the Beach Boys wanted help from Rhonda, Kathy Kirby and Butch Moore sang in Eurovision in Naples, and the Seekers knew they would never find another you.

Ted Heath became the Tory leader, George Papandreou was sacked in move that would later turn into the colonels’ coup, Sean Lemass had led on, draft cards were being burnt across America, Vatican 2 was coming to an end, WB Yeats was reburied, and Kenneth Tynan, briefly director of Garrick Theatre in Lichfield, used the ‘F’ word on British television.

Lady Penelope and Thunderbirds were about to go, and I was still reading the Eagle, Look and Learn and Lion. But I was maturing in a way I did not yet understand. If my accent was a little too English for a teenager in Ireland, I was sent to Ballinskelligs in the Kerry Gaeltacht the following year. That was the ‘Summer of Love’ and there I would read Anne Frank’s Diaries and Catcher in the Rye, have my first smoke, and face the challenge to go ‘skinny dipping.’ From there I was sent on to boarding school in Gormanston.

My world was changing, and the Isle of Man – with its hotel whose name I have forgotten, and the temptations of ‘island hopping’ – was playing a part in those changes. 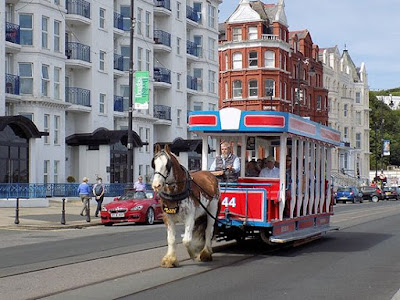 A horse-drawn tram on the seafront in Douglas (Photograph: Tripadvisor)

So nostalgic to read this.