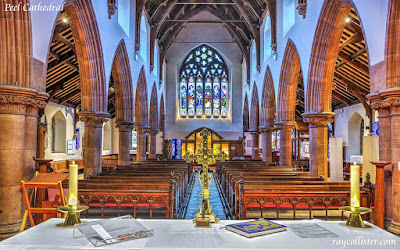 Inside Peel Cathedral … the cathedral of the Isle of Man and of the smallest diocese in the Church of England (Photograph: Peel Cathedral / raycollister.com)

I was musing this morning about a holiday on the Isle of Man in 1965, when I was in my early teens, how it offered me first experiences of staying in an hotel and of ‘island hopping.’

I still remember reading about the history of the island and visiting many of its sites, including Saint German’s Cathedral in Peel.

The island is equidistant from England, Ireland and Scotland, so, at times, after the Isle of Man was separated from the Diocese of Trondheim in Norway, it was not clear in church history whether the island was part of the Church in Scotland, in England or in Ireland.

Tradition says the diocese was founded by Saint German – not to be confused with Saint Germanus of Auxerre – a Celtic missionary who lived from ca 410 to 474, and a contemporary of Saint Patrick. Saint German’s Day is celebrated on 13 July. Later Irish saints on the island’s list of bishops include Saint Maughold (feast day 31 July), the fourth bishop, a disciple of Saint Patrick, and the seventh century missionary Saint Conan. Some traditions on the island say the parish of Braddan was named after Saint Brendan the Navigator.

In the confused histories of the diocese, there is evidence that at one point during Viking rule in the late 11th century, the Isle of Man and Viking Dublin were part of the same diocese.

John Dongan or Donegan was the last bishop of the united diocese of Sodor, which split into the Scottish and Irish or Manx parts during the Western Schism. Pope Urban V appointed him Archdeacon of Down in 1368, and he worked as the papal tax collector and nuncio in Ireland. As a reward, he was appointed Bishop of Mann and the Isles (Sodor) in 1374, and was consecrated by Cardinal Simon Langham, former Archbishop of Canterbury. However, Dongan was kidnapped on his way back from Avignon, imprisoned in Boulogne-sur-Mer, and was ransomed for 500 marks.

He did not get back to the Isle of Man until 25 January 1377, when he celebrated his first Mass in Saint German’s Cathedral, Peel.

Allegations surfaced in 1380 that Dongan was illegally holding on to the revenues he had been collecting officially in Ireland for Pope Urban. However, the allegations may have been made because Dongan supported the English-backed Pope Urban against the Scottish-backed anti-pope Clement VII.

Clement VII deposed Dongan as bishop in 1387, replacing him with Archbishop Michael of Cashel, a Franciscan friar. Although Dongan remained the de facto bishop in the Isle of Man, this marked the final rift between the Hebrides and the Isle of Man within the diocese. The Scottish-controlled islands were lost to the new bishop, and Dongan was left with a tiny diocese that was too small and too poor for a full-time bishop.

Later in the 15th century, Richard Payl, a Dominican friar who had been appointed Bishop of Dromore by Pope Gregory XII in 1407, was appointed Bishop of Mann and the Isles by Antipope John XXIII in 1410, and remained bishop in the Isle of Man until ca 1433.

Although the Isle of Man was never legally part of England, the diocese became part of the Province of Canterbury until it was transferred to the Province of York in 1542.

Even then, the appointment of bishops produced some anomalies before and after the Reformation. At least two bishops were also Abbots of Chester, then in the Diocese of Lichfield. After the Caroline Restoration, Isaac Barrow was allowed to hold the overlapping appointments of Bishop of Sodor and Man (1663-1671), Governor of the Isle of Man (1664-1671) and Bishop of St Asaph (1669-1680) in Wales.

However, the diocese continued to receiver a number of bishops with strong Irish connections.

Thomas Wilson (1663-1755), who was Bishop of Sodor and Man for almost 60 years (1697-1755), first studied medicine at Trinity College Dublin from 1682, where his friends and contemporaries included Jonathan Swift, future Dean of Saint Patrick’s Cathedral, Dublin, and his tutor was John Barton, afterwards Dean of Ardagh. He graduated BA in 1686, and was ordained deacon that year, before attaining the canonical age, by William Moreton, Bishop of Kildare, in Saint Brigid’s Cathedral, Kildare.

When he arrived as bishop, he found most of the churches on the Isle of Man were in ruins. He rebuilt many churches, built new churches and libraries, advocated agrarian reforms to the benefit of tenants, promoted the Manx language, and was an early supporter of the Anglican mission agency, the Society for the Propagation of the Gospel (SPG, now USPG).

He corresponded with Cardinal Fleury, Archbishop of Aix in France, and they joked that ‘they were the two oldest bishops’ and ‘the poorest in Europe.’ When he died in at the age of 91, he was still an active bishop.

William Ward, who was born in Saintfield, near Belfast, in 1762, was Bishop of Sodor and Man in 1828 to 1838. As bishop, he vigorously opposed a proposal in 1836 to amalgamate the diocese with the Diocese of Carlisle. The proposal failed, and Ward remained bishop until he died in 1838.

Walter Augustus Shirley (1797-1847),who was the Bishop of Sodor and Man in 1846-1847, was born in Westport, Co Mayo. His paternal grandfather was the controversial Walter Shirley, who was censured by the Bishop of Clonfert, reprimanded by the Archbishop of Dublin, and who is buried in Saint Mary’s Church, Dublin. His maternal grandfather, Sir Edward Newenham, was MP for Enniscorthy, Co Wexford (1769-1776), and for Co Dublin (1776-1797).

Shirley was a cousin of Edward Newenham Hoare (1802-1877), who was Dean of Achonry and then of Christ Church Cathedral, Waterford. Shirley was an advocate of Catholic Emancipation, a friend of the Tractarians, and Archdeacon of Derby in the Diocese of Lichfield before he was appointed Bishop of Sodor and Man. His episcopal consecration was delayed because of his ill-health, and he died within three months of his consecration.

A second proposal to amalgamate Sodor and Man with an English diocese was made in 1875, this time with a new Diocese of Liverpool, which was still at the planning stage. The proposal failed, and Rowley Hill (1836-1887) became Bishop of Sodor and Man (1877-1887).

Hill was born in Derry, a son of Sir George Hill. When he was appointed to the Isle of Man, he was the youngest bishop in Anglican Communion. He too was in favour of amalgamating his island diocese with the new Diocese of Liverpool, as this would allow better stipends. Most of his clergy agreed with him but lay opposition was against him and the new diocese was formed in 1880 without the Isle of Man.

There is an amusing Irish connection with the Diocese of Sodor and Man. In their operetta Patience (1881), Gilbert and Sullivan mention the Bishop of Sodor and Man in the song ‘If you Want a Receipt for that Popular Mystery’ sung by Colonel Calverley.

In a reference is Bishop Rowley Hill, the song lists the elements of a Heavy Dragoon, including ‘Style of the Bishop of Sodor and Man’:

If you want a receipt for that popular mystery,
Known to the world as a Heavy Dragoon,
Take all the remarkable people in history,
Rattle them off to a popular tune.

The pluck of Lord Nelson on board of the Victory –
Genius of Bismarck devising a plan –
The humour of Fielding (which sounds contradictory) –
Coolness of Paget about to trepan –
The science of Jullien, the eminent musico –
Wit of Macaulay, who wrote of Queen Anne –
The pathos of Paddy, as rendered by Boucicault –
Style of the Bishop of Sodor and Man –
The dash of a D’Orsay, divested of quackery –
Narrative powers of Dickens and Thackeray –
Victor Emmanuel – peak-haunting Peveril –
Thomas Aquinas, and Doctor Sacheverell –
Tupper and Tennyson –Daniel Defoe –
Anthony Trollope and Mister Guizot!

The poet John Betjeman later described the Bishop of Sodor and Man as ‘that luckless Bishop whose cathedral is a beautiful ruin of green slate and red sandstone on an islet overlooking Peel.’

Today, the chapter of Saint German’s Cathedral, Peel, includes the Dean, the Archdeacon, and four canons with the designations of Saint Patrick, Saint Maughold, Saint Columba and Saint German – an acknowledgement of the centuries-old link between the Diocese of Sodor and Man and the saints and churches of Ireland and Scotland.