Climbing the divine ladder
to see, if only dimly, how
small some of our worries are 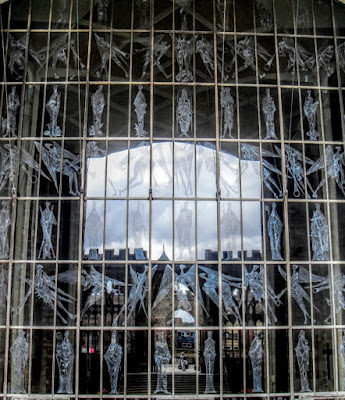 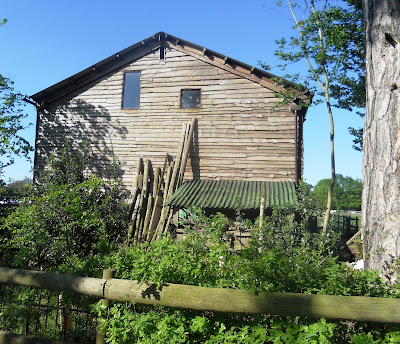 ‘Gather the wheat into my barn’ (Matthew 13: 30) … a barn on a farm at Cross in Hand Lane, outside Lichfield (Photograph: Patrick Comerford)

But throughout history, humanity has stooped to burn what we dislike and what we want to expunge, and we have done it constantly.

We have been burning books as Christians since Saint Athanasius ordered the burning of texts in Alexandria in the year 367.

Extremists of all religious and political persuasions want to burn the symbols and totems of their opponents, whether it is white supremacists attacking and burning mosques and synagogues, or jihadists burning the Twin Towers in New York.

The limits of our extremists seem to be defined by their inflammatory words.

But who is being burned in this morning’s Gospel reading?

Who is doing the burning?

And who will be weeping and gnashing their teeth?

Contrary to many shoddy readings of this Gospel reading, Christians are not asked to burn anyone or anything at all. And, if we have enemies, we are called not to burn them but to live with them, even love them. Judgment is left with God, while we are left to love and to pray.

Too often we think of who might be excluded from God’s plans rather than who is counted in. When we do that, we descend to our greatest depths rather than reaching our potential heights.

Perhaps, like Jacob in our first reading (Genesis 28: 10-19a), we are called to reach to the greatest heights accessible, rather than descend to the worst depths available.

Some suggestions about how we might reach those heights through prayer are hinted at in this first reading.

Isaac has sent his son Jacob off to find a wife for himself in Haran, and he is sent on a long journey by himself. On the way, he stops for the night at Bethel, which means the ‘House of God,’ puts his head down on a hard pillow, and dreams.

His dream recalls those ziggurats, those massive, terraced religious structures, with successively receding stories or levels. They were built with a ladder to the top, what people imagined was a stairway to heaven.

These stairways, in that culture, were said to lead to a place way above the people, where they were told the local god or gods lived. The name of the Tower of Babel, for example, means ‘Gateway to God.’

But these structures also tried to limit local gods to local places, and the gods were inaccessible to the local people. The cult priests could climb up, but the gods never deigned to come down.

The image of angels ascending and descending suggest the possibility, the reality of a two-way contact with God.

God speaks and identifies himself not as a local god but as the God of the patriarchs, Abraham and Isaac. Do you remember the stories of Abraham’s wanderings?

This God is not some mere local god that might be identified with that one place alone, confined to Bethel. Jacob is reminded of the promises made to Abraham and Isaac. But then there is a specific promise that is unique to Jacob. And yet, this is a promise for everyone, everywhere: God will watch over or keep Jacob wherever he is; God is present everywhere, not just in this place.

Jacob is awe-struck, he is afraid. He finds the place is awe-inspiring or awesome. This, he says, is the ‘House of God,’ Bethel, and the ‘Gate of Heaven.’ On the next morning, he uses his humble stone pillow to mark the divine presence. God is present even in the most humble of places, with the most humble of people.

When he wakes, Jacob declares, ‘How awesome is this place! This is none other than the house of God, and this is the gate of heaven.’

The former Chief Rabbi, Lord (Jonathan) Sacks, sees Jacob’s dream as the metaphor above all others that captures the spirit of prayer, that is transfiguring. He says the Hebrew word used here (vayifgah) means ‘to happen upon, as if by chance.’

He says ‘this place’ is any place: ‘Any place, any time, even the dark of a lonely night, can be a place and time for prayer. If we have the strength to dream and then, awakening, refuse to let go of the dream, then here, now, where I stand, can be the gate to heaven.’

He continues: ‘Prayer is a ladder and we are the angels.’

He identifies the one theme sounded throughout traditional Jewish prayer as ‘creation-revelation-redemption,’ or ‘ascent-summit-descent.’

In prayer, he says, we climb the divine ladder and see, if only dimly, how small some of our worries are. ‘We are not the same after we have stood in the Divine presence as we were before. We have been transformed. We see the world in a different light. Perhaps we radiate a different light. We have spoken and listened to God. We have aligned ourselves with the moral energies of the universe. We have become … vessels for God’s blessing. We are changed by prayer.’

So, if you have been worried about churches being closed for so long, if you are frightened and fearful of the future, if you wonder where God is in the midst of all our problems, then: God is here.

God is here, wherever you are. We are ‘vessels for God’s blessing.’ You are the good soil on which good seed falls. You too can be changed, transformed, realigned, by prayer, at any time, in any place. 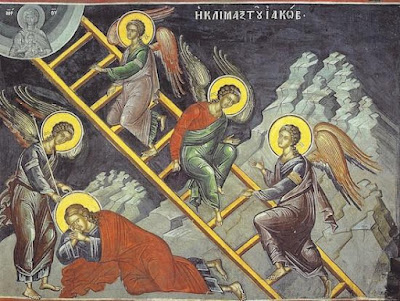 10 Jacob left Beer-sheba and went towards Haran. 11 He came to a certain place and stayed there for the night, because the sun had set. Taking one of the stones of the place, he put it under his head and lay down in that place. 12 And he dreamed that there was a ladder set up on the earth, the top of it reaching to heaven; and the angels of God were ascending and descending on it. 13 And the Lord stood beside him and said, ‘I am the Lord, the God of Abraham your father and the God of Isaac; the land on which you lie I will give to you and to your offspring; 14 and your offspring shall be like the dust of the earth, and you shall spread abroad to the west and to the east and to the north and to the south; and all the families of the earth shall be blessed in you and in your offspring. 15 Know that I am with you and will keep you wherever you go, and will bring you back to this land; for I will not leave you until I have done what I have promised you.’ 16 Then Jacob woke from his sleep and said, ‘Surely the Lord is in this place – and I did not know it!’ 17 And he was afraid, and said, ‘How awesome is this place! This is none other than the house of God, and this is the gate of heaven.’

18 So Jacob rose early in the morning, and he took the stone that he had put under his head and set it up for a pillar and poured oil on the top of it. 19 He called that place Bethel. 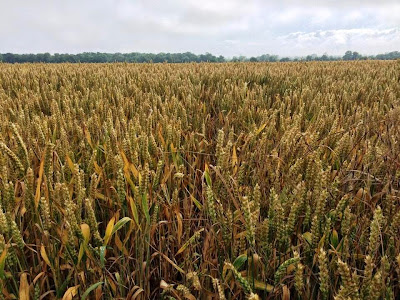 24 He [Jesus] put before them another parable: ‘The kingdom of heaven may be compared to someone who sowed good seed in his field; 25 but while everybody was asleep, an enemy came and sowed weeds among the wheat, and then went away. 26 So when the plants came up and bore grain, then the weeds appeared as well. 27 And the slaves of the householder came and said to him, “Master, did you not sow good seed in your field? Where, then, did these weeds come from?” 28 He answered, “An enemy has done this.” The slaves said to him, “Then do you want us to go and gather them?” 29 But he replied, “No; for in gathering the weeds you would uproot the wheat along with them. 30 Let both of them grow together until the harvest; and at harvest time I will tell the reapers, Collect the weeds first and bind them in bundles to be burned, but gather the wheat into my barn”.’ 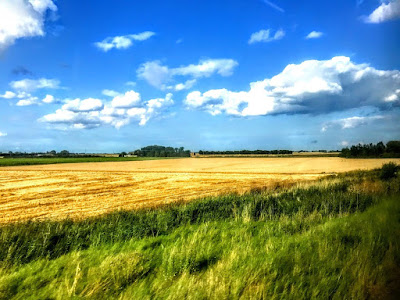 ‘The field is the world, and the good seed are the children of the kingdom’ (Matthew 13: 38) … fields of green and gold north of Cambridge (Photograph: Patrick Comerford, 2019)

Saving God,
in Jesus Christ you opened for us
a new and living way into your presence:
give us pure hearts and constant wills
to worship you in spirit and in truth;
through Jesus Christ our Lord,
who lives and reigns with you and the Holy Spirit,
one God, now and for ever. 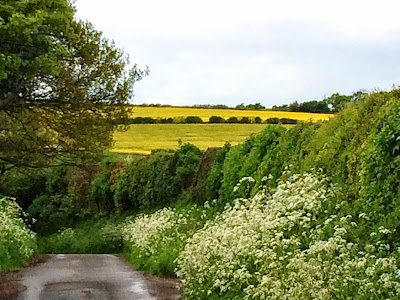 ‘Other seeds fell on good soil and brought forth grain’ (Matthew 13: 8) … fields at Cross in Hand Lane, in rural Staffordshire, near Lichfield (Photograph: Patrick Comerford) 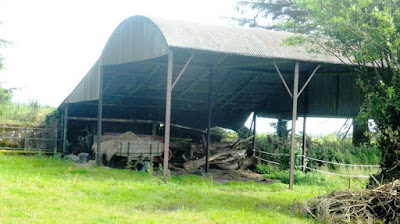 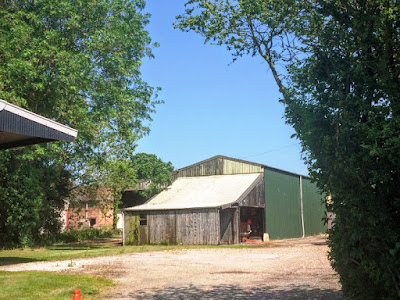