Cappoquin Rowing Club,
‘the old dark blues’ and
one of Ireland’s oldest

Cappoquin Rowing Club and the clubhouse at the bridge on the River Blackwater (Photograph: Patrick Comerford, 2020)

Since childhood, one of my favourite buildings in Cappoquin has been the Boathouse is part of Cappoquin’s river, sporting and cultural heritage. Although it is closed because of the present Covid-19 pandemic restrictions, I had to walk out to the boathouse when I arrived in Cappoquin during the first phase of this summer’s ‘Road Trip.’

The boathouse has been a centre of rowing in Cappoquin for over a century and a half and has been the venue for countless dances, concerts and shows, with the likes of Bowyer and Woodward bringing opera and Anew McMaster, Micheál Mac Liammóir and Hilton Edwards performing Shakespeare.

The present boathouse below the bridge on the River Blackwater, above the bend on the river, is perhaps the third boathouse on or near this site, but incorporates parts of the previous, modest buildings, including the overhanging wooden balcony. 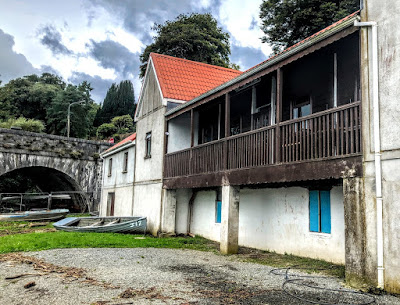 Cappoquin Rowing Club was founded in 1862, making it one of Ireland’s oldest, but there are records from as early as the 18th century of boat and swimming races on the River Blackwater, and the club is Cappoquin’s oldest sporting and social organisation.

The club was founded by James M Moore and John Stanley, assisted by Sir John Henry Keane of Cappoquin House, who became the first president of the club. His presidency was invested with a significant rowing pedigree as he had captained the Trinity Boat at Cambridge three decades earlier and rowed for Cambridge in 1836 when they defeated Oxford.

In the early years, storage space for the boats was improvised and there was no formal clubhouse. However, in 1875, the first clubhouse was built with the assistance of tradesmen engaged in building the railway line. A later clubhouse built in 1910, was financed substantially by Mrs HC Villiers-Stuart of Dromana House. 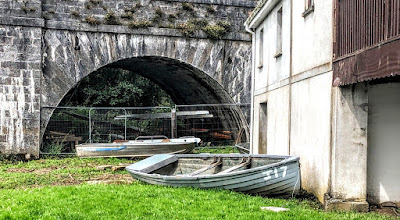 In the early years, storage space for the boats was improvised (Photograph: Patrick Comerford, 2020)

Sir John Keane, who rowed for Cambridge in the 1836 boat race and defeated Oxford by four lengths, is the man who started it all. His efforts so prospered that when in 1990 Cappoquin were finalists at Henley regatta, Dan Murray’s exuberance echoed around the headlines with the words ‘Cappoquin, the smallest and best rowing club in the world.’

Sir John Keane was the first President of the Cappoquin Rowing Club. As a student at Trinity College Cambridge in the 1830s, he captained the Trinity Boat. He also rowed at No 6 in the Cambridge ‘cutter’ in the University Boat Race in 1836. The course was from Westminster to Putney and Oxford were favourites. Cambridge led off the start and came away to win by four lengths.

In 1837, John Keane rowed at No 4 for Cambridge in their first ever contest against the Leander Club. Cambridge began as favourites and the course was from Westminster to Putney. Leander led off the start, but Cambridge took the lead at Vauxhall Bridge, were well up by Battersea Bridge, and won comfortably by seven seconds.

Sir John Keane inherited Cappoquin House and the family title in 1855, and in the early 1860s he laid the foundations of the Cappoquin Rowing Club. The first record of a payment by Sir John Keane in relation to the Cappoquin club is in 1876 to James Mosley of Waterford for engraving cups and prizes. In the same year he had the rules of the club revised and printed in book form by Brenan’s of Dungarvan.

John Stanley bought a new four and scull from Salters of Oxford in 1876 and Sir John Keane, John Stanley and James Moore were the pioneers who brought the first sliding seats to Cappoquin. 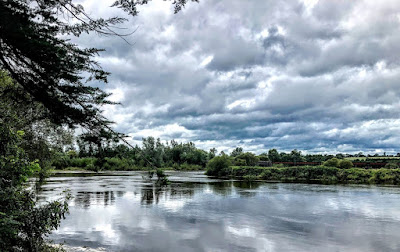 The bend on the River Blackwater at Cappoquin Rowing Club (Photograph: Patrick Comerford, 2020)

Meanwhile, Sir John Keane’s son, Sir Richard Keane, gave a further piece of land to the club in 1889. The lease was signed by him, RJ Collender and R O’Brien and this lease is said to be still in force, with a fixed annual rent of 24 shillings.

Senator Sir John Keane also took a keen interest in the club, taking an active part in role in fundraising and singing at CRC concerts in Cappoquin.

His son, Sir Richard Keane, was the club’s patron, and was responsible for bringing over Hugo Pitman, one of Oxford University’s best known oarsmen and twice captain of an Oxford boat that beat Cambridge, to help coach the successful McGrath eight.

A plaque at the steps above the clubhouse celebrates Charles Orr Stanley, a patron of Cappoquin rowing (Photograph: Patrick Comerford, 2020)

A plaque at the steps above the clubhouse celebrates Charles Orr Stanley (1899-1969), a great patron of Cappoquin rowing and a son of one of the founders of the club.

Stanley was a successful businessman in the mid-20th century. He lived at Cambridge, where he farmed and was a director of the Pye multinational, with factories all over the world.

In the 1960s, Pye also took over Banhams on a site next to Elizabeth Way Bridge on the River Cam in Cambridge. Banhams had been boat builders for over 100 years.

At the time, Cambridge had 28 college clubs and 22 clubs had their boats built by Banhams, who also built the boats for the Oxford and Cambridge Boat Race. Stanley organised the finances of the Cambridge University Boat Club from a state of disaster to the one of keen health it has enjoyed ever since. 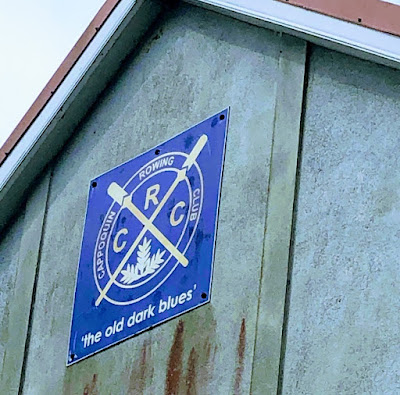 Two books about the club have been published, each recounting its successes and profiling the personalities as well as key rowing and social events down through the decades.

The first book, Memories of one hundred years of rowing by Cappoquin oarsmen: a souvenir in words and pictures of our century (1962) was edited by Tom Tobin and marked the club’s centenary.

The second book, The old dark blue: Cappoquin Rowing Club 1862-2002 (2002), was edited by Brendan Kiely, and added the club’s successes over the following 40 years.

As for the ‘Red Bridge,’ still visible from the clubhouse, this was a half-iron, half-stone structure that opened in 1878 as part of the new Waterford, Dungarvan and Lismore railway line. The metal section was used to complete the job more quickly and leave higher arches for some boat masts to get under.

The line took six years to build and was, at the time, the most expensive railway project in Ireland. The Red Bridge closed when CIÉ shut the line in 1967. 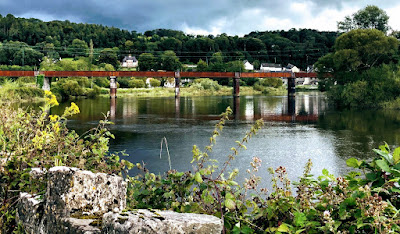 In the early 1950s I stroked a Schools Four with Clonmel RC. I remember attending Cappoquin Regatta and at the dance where the beautiful Lady Villiars-Stuart presented the prizes.