‘Justice, justice you shall pursue’
‘May her memory be a revolution’ 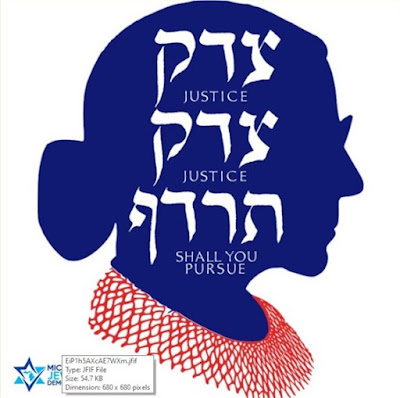 The US Supreme Court Justice Ruth Bader Ginsburg was a trailblazer on behalf of gender equality, and she paved the way for women in the law and on the courts. She fought fiercely and unflinchingly to advance and defend the rights of women and minorities.

She embodied the principle of equal justice for all under the law, as well as the Jewish value of ‘tzedek, tzedek, tirdof’ – ‘justice, justice shall you pursue’  (Deuteronomy 10: 20).

That saying hangs framed on the wall of her Supreme Court chamber, and summed up perfectly her calling as jurist and a Jew.

Accoridng to Jewish tradition, a person who dies on Rosh Hashanah is a tzaddik, a person of great righetousness.

She once said: ‘The greatest menace to freedom is an inert people; that public discussion is a political duty; and that this should be a fundamental principle of the American government.’

I watched the biographical movie RBG last night. In an interview in 2018 with Jane Eisner, then editor of the Jewish daily Forward, Ginsburg said that she grew up in the shadow of World War II and the Holocaust and that it left a deep and lasting imprint on her.

‘She saw being a Jew as having a place in society in which you’re always reminded you are an outsider, even when she, as a Supreme Court justice, was the ultimate insider,’ Jane Eisner told the Washington Post. ‘That memory of it — even if it’s more from the past — informed what she thought society should be doing to protect other minorities.’

Ginsburg attended Washington’s Adas Israel Congregation once a year for the Kol Nidre service on the eve of Yom Kippur. Rabbi Lauren Holtzblatt of Adas Israel said the Conservative synagogue extends free membership to all the Jewish justices on the court.

One Facebook poster, with the name Elissa Laura, wrote:

As an American, a woman, a Jew, and a lifelong Washingtonian whose great-grandparents fled pogroms and violent persecution in Eastern Europe to this ‘Land of Opportunity,’ RBG’s life and legacy were truly the American Dream and epitomised the American and Jewish values I hold dear: justice for all, tikkun olam – repairing the world, and standing for what is morally right.

Two years ago, I happened to be shuffling out of synagogue on the Jewish High Holidays right behind RBG herself. I felt an electric shock through my body (while not so subtly quickly playing paparazzi) and managed to squeak out ‘Gmar chatima tova, RBG’ (have a good fast, RBG) and then ‘We need you,’ as she continued to move forward and out of the shul. The entire evening was emotional and inspiring, and this was a true highlight of that which I will always carry with me.

As ecstatic as I was to have experienced that, I was reeling with how devastated and horrified I was at what was happening right then with [Brett] Kavanaugh. As a survivor, I felt beyond overwhelmed and disgusted. I needed to hold on to someone/ something that has constantly stood for morals, fought for rights, and been strongly yet deftly subversive in a system that has perpetually negated, demoralised, and oppressed.

I decided that no matter what happens, I’m going to keep trying to embody RBG and that electric shock I felt just being in her presence.

Hearing the shofar blow on Erev Rosh Hashanah, our Jewish New Year and the eve of her passing, at the Supreme Court last night nearly ripped my heart out. I am so fearful of what is to come and the balance of power tipping in a very dark direction.

In Judaism, when someone passes, we say ‘May their memory be a blessing.’ In this case, we would add ‘May her memory be a revolution.’

We must mourn. And we must fight, to keep her legacy and honour. May she continue to inspire us and give us courage and guidance when we are tired, hopeless and afraid. May her memory be a blessing and a revolution.

RBG had these words hanging in her chambers and may they inspire us all:
,צדק צדק תרדוף ‘Justice, Justice shall you Pursue.’

Thank you for your words. Would you be willing to share where you pulled that picture from? I have been looking for the right Tzedek Tzedek Tirdof print for my law office for years and this would be the one if I can find its source and receive permission. Thank you.