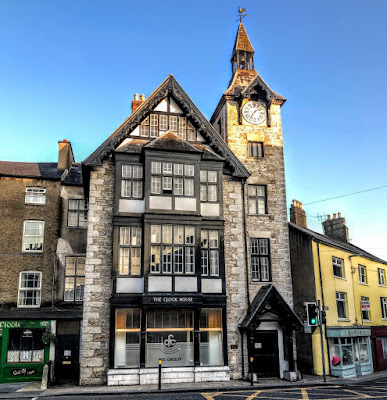 I was walking around Mallow, Co Cork on Friday evening, and tone of the most striking architectural features in the town centre is the Clock House, at the junction of Spa Road and Bridge Street.

The Clock House was built ca 1858, by Sir Charles Denham Orlando Jephson-Norreys, an amateur architect, who is said to have designed the building after returning from an Alpine holiday.

Before the Clock House, this was site of the ‘Long Room’ built by his ancestor, Colonel Anthony Jephson of Mallow Castle. It was a two-storey building that extended to the existing street of Bridge Street and opened on 16 May 1738.

At first, visitors to the nearby Spa House were entertained in this assembly building. Later, it became the Long Room Primary School, where the pupils included the writer Canon Patrick Sheehan (1852-1913), and William O’Brien (1852-1929), the Home Rule MP for Mallow who married Sophie Raffalovich, whose life story I recalled in a blog posting on Saturday [19 September 2020]. 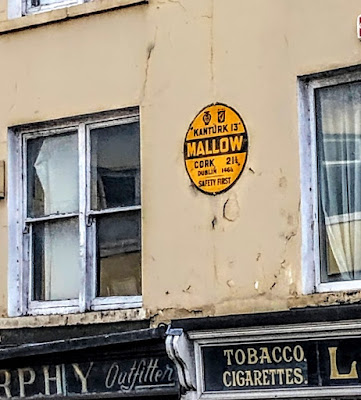 The Long Room created a bottleneck on the roads out of Mallow to Kanturk, Fermoy and Cork (Photograph: Patrick Comerford, 2020)

The building created a traffic bottleneck and, as Mallow expanded, it became an obstruction. Sir Charles Denham Orlando Jephson-Norreys (1799-1888), who had inherited the site as Lord of the Manor, ordered the demolition of that half of the building that blocked the street. The rear of the building would remain intact.

Sir Charles was born in Mallow and educated in England, and returned to Mallow after his father died to take over the manor. His later work included building in the Market Square site and his own home on the castle grounds. He was Liberal MP for Mallow in 1826-1859, and was given the hereditary title of baronet in 1838.

Although the building is now known as the Clock House, it was known to Jephson and in older maps the Clock Tower. The building was erected in 1858 and was built in the Tudor style, but was also influenced by buildings Jephson-Norreys saw on his travels on continental Europe.

The clock on the top of the tower was brought from the tower of old Mallow Castle. The clock was also visible to many of the residents of the town, and was a welcome feature at a time when few people could afford watches and few premises had clocks.

The bell that rang on the hour, every hour, was cast in a forge in Millerd Street, Cork, and was brought to Mallow by horse and cart.

With Mallow situated on a limestone plateau, it made sense that the stone that was used to construct the building was sourced in the town. The limestone came from a quarry only 300 meters from the Clock House, owned by the Jephson-Norreys family. The quarry was later filled in and the area is now known as Spa Glen, Mallow.

The interior and structural timber is said to have come from the grounds of Mallow Castle, about 500 meters away. The craftsmanship in the building is of a high standard. A splayed dovetail joint is used to join the rafter and collar.

As one looks at the front façade of the building, the windows decrease in height as the building rises. The windows were made of solid oak and it is believed they were manufactured and installed by a local man named O’Flynn. On the first floor, there five west facing glazed panels facing up the Main Street.

The front door leads into the landing area. The decorative wooden pillars on both sides of the doorway were installed also by O’Flynn. Other features include the decorative floor tiles on the ground floor. The other floors are covered with oak boards.

From the outside, a decorative wooden feature is inscribed with the letter N, representing the Norreys family.

Sir Charles’s wife, Catherine Cecilia Jane (Franks), died in 1853, and his last surviving son died in May 1888. When he died on 11 July 1888, his title of baronet became extinct and the Mallow estates, by now heavily indebted, passed to his eldest daughter, Catherine Louisa (1827-1911). 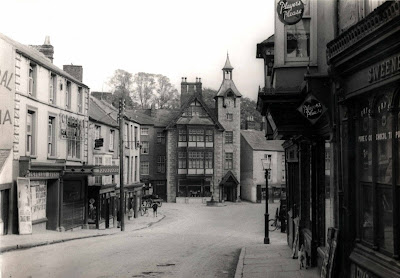 A photograph of the Clock House in 1936 (Photograph: Patrick Comerford, 2020)

A photograph of the Clock House in 1936 can be dated because the Central Cinema is advertising Craig’s Life, starring Rosalind Russell and John and released in 1936. The print forms part of a bound volume containing a collection of views of Irish life intended for publication in the Capuchin Annual.

The bell was removed in 1970 as the aging structural timber of the tower was unable to support its weight. The bell tower was removed around 1970, but was restored in 1995.

Meanwhile, Mallow Castle was sold by the Jephson family in 1984 and the castle and the grounds have been in the possession of Cork County Council since 2011. 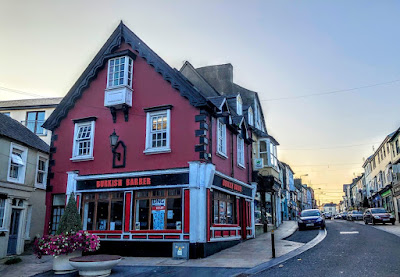