Westgate houses raise
fears about the future
of Georgian Wexford 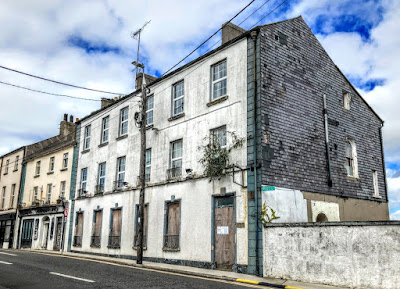 The second stage of this year’s late summer ‘Road Trip’ brought two of us from Cork, Clonmel and Kilkenny through Bunclody to Wexford Town, which always charms me and continues to feel like home.

Even though I moved from Wexford to Dublin in the mid-1970s and from the Wexford People to The Irish Times, I continue to delight in exploring the town’s history and heritage, and strolling through its narrow streets and lanes.

Dunluce is an important part of the early 19th century architecture of the town. It was first known as Slaney View, and was built as the Wexford townhouse of the Perceval family of Slaney Manor.

The architectural features of the house include the classically-detailed doorcase with its simplified ‘peacock tail’ fanlight; the diminishing in scale of the windows on each floor producing a graduated visual impression; and the elegant bow defining the principal rooms.

Other details include crown or cylinder glazing panels in hornless sash frames, the joinery, the restrained chimney-pieces and the sleek plasterwork refinements.

Slaney Manor, also known as Barntown House, was developed by Thomas Perceval in the 17th century. The Cork branch of the family included Spencer Perceval (1762-1812), the only British Prime Minister to have been assassinated. A succession of former owners and tenants of Slaney Manor including Sir Frederick Hughes (1814-1895), Lady Theodosia Hughes (1851-1931) and Admiral David Beatty, 1st Earl Beatty.

There is a memorial in the gallery in Saint Iberius’s Church, Wexford, commemorating Edward Perceval who died at the age of 21 while he was in the navy.

The Perceval family remained at Slaney Manor until 1923, although Slaney View in Westgate may have been sold at an earlier date. Slaney View was renamed Dunluce by Edward McQuillan, who claimed to be The McQuillan or head of the Clan McQuillan, once based at Dunluce Castle in Co Antrim.

Edward McQuillan was one of the prominent Quakers in Wexford in his day, and died in 1941. The former Quaker Meeting House in High Street, Wexford, dating from 1657, had closed in 1927 following the departure of the three remaining Thompson families. 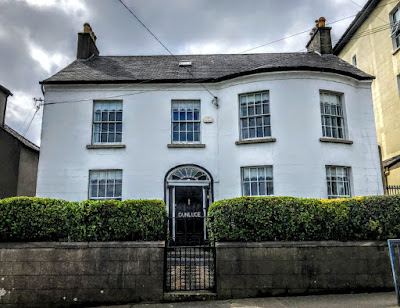 Dunluce, renamed after the McQuillan castle in Co Antrim, was once the Perceval family townhouse at Westgate (Photograph: Patrick Comerford, 2020)

Next door, the former technical school is a more recent building in Westgate, dating from 1918. But this early 20th century, three-bay, three-storey building stands on the site of and may incorporate parts of Spa Well House, built in the 18th century by the Harvey family.

This earlier house may be reflected in details such as the classically-detailed doorcase, the diminishing in scale of the windows on each floor producing a graduated visual impression with these windows showing a late instance of the so-called ‘Wexford Window’ sash-and-overlight glazing pattern. 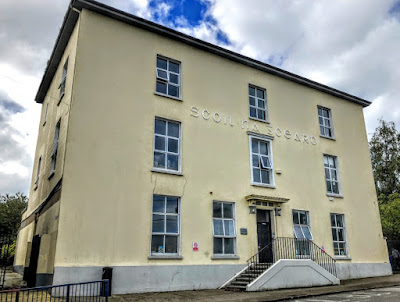 The former technical college stands on the site of the townhouse of the Harvey family (Photograph: Patrick Comerford, 2020)

The former Westgate Bed and Breakfast was built in the early 19th century as the townhouse of the De Rinzy family of Clobemon Hall, near Ferns. The De Rinzy family claimed descent from Sir Matthew de Renzy or Rentsi (1577-1634), a native of either Cologne or the Low Countries and ‘a great traveller and general linguist.’ He in turn was claimed as a descendant of Scanderbeg (1405-1468), the great Albanian hero. He died on 29 August 1634, either in Dublin or at Clobemon Hall, Ferns, was held by his descendants until recent times.

The house was built around 1825. It has been described as a ‘well-composed house of the middle size.’ It was built as the townhouse of the De Rinzy family of Clobemon Hall, but at a later point it became two separate houses on a prominent position on a corner site where Westgate and Slaney Street meet.

The building was extensively renovated in the late 20th century for use as a guesthouse.

An Taisce objected on the grounds of the building’s architectural heritage and its proximity to Wexford’s old town wall at the rear of the building and said it is possible that masonry walls and cobbled surfaces found in the basement of the neighbouring West Gate Tavern are part of the town wall.

The former Westgate Tavern was run by Michael and Catherine Power for 18 years until it was sold in May 2005. 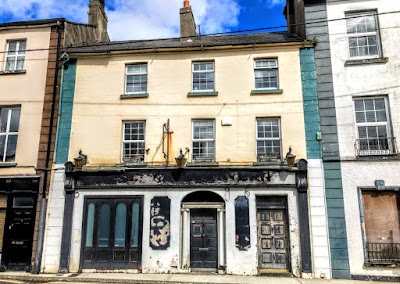 The former Westgate Tavern has been closed since it was sold in 2005 (Photograph: Patrick Comerford, 2020)

Maria Pepper reported in the Wexford People four years ago (27 August 2016) that Tony and Breda Wright had applied for permission to demolish the structure for safety reasons.

The Wrights proposed to demolish the building and to finish the area with gravel and a new boundary wall to match an existing wall. But they did not outline any plans for the future use of the site.

The council rejected their application because it would have ‘a detrimental impact on the streetscape and the architectural character of the area.’

In addition, the Wexford Town Walls Conservation Plan says there should be no further demolition of 19th century or earlier properties and that building against, overlooking or opening onto the town wall should not be allowed unless there is a compelling case to show that the outcome will be of ultimate benefit of the town walls.

No plans have been put forward for the future development of the site and there are fears that the proposed demolition would result in a vacant brownfield site that ‘would have a detrimental impact on the streetscape and the visual amenity of this town centre area.’

Wexford County Council referred the Westgate application to a number of agencies for comment or recommendation, including the Heritage Council, the Department of Arts, Heritage and the Gaeltacht and An Taisce.

An Taisce’s report recommended refusing permission for the demolition, saying the house stands on a strategic location and demolition would be ‘inappropriate.’ It said, ‘Wexford County Council should encourage the re-use of centrally-located vacant buildings rather than demolish these structures.’

Meanwhile, the former De Rinzy townhouse at Westgate continues to crumble and deteriorate, the building suffers from dry rot, a first-floor beam has collapsed, and the rear and side of the building are being used as a car park. It is a sad and visible commentary on the threats facing Wexford’s Georgian architectural heritage. 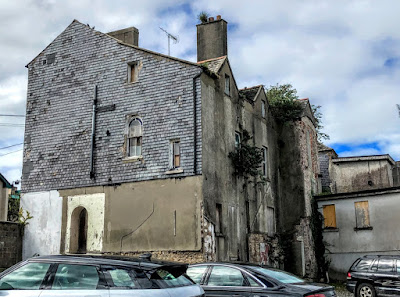 The side and rear of the former De Rinzy townhouse at Westgate are being used as a car park (Photograph: Patrick Comerford, 2020)