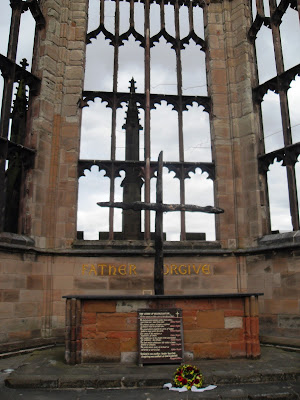 ‘If two of you agree on earth about anything you ask, it will be done for you by my Father in heaven’ (Matthew 18: 19) … the Cross of Nails in Coventry Cathedral (Photograph: Patrick Comerford) 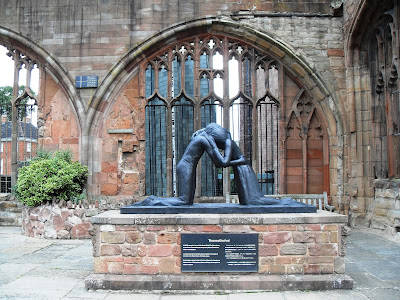 ‘Go and point out the fault when the two of you are alone’ (Matthew 18: 15) … the sculpture ‘Reconciliation’ by Josephina da Vasconcellos in Coventry Cathedral (Photograph: Patrick Comerford)

In this morning’s Gospel reading (Matthew 18: 15-20), Christ has just told the parable of the lost sheep, and how the shepherd goes in search of the one that goes astray, and rejoices over finding it (Matthew 18: 10-14).

So now, how should the Church respond to one member who has gone astray or who sins against other members of the Church?

The first response is to try taking that person aside to point out their fault. But that person should not be humiliated in front of others, and this should be done alone.

However, if you are not listened to, one or two others should be asked to be present as witnesses.

If the person still refuses to listen, the matter should be brought before the whole assembly of the Church, the ekklesia.

If the offender refuses to listen even to the Church, then, as a final sanction, that person should be treated as an unworthy outsider.

Christ then says that ‘you’ – the whole assembly of the Church, the ekklesia – have the authority to bind or condemn, to loose or to acquit, as if this is a decision that has divine authority.

Finally, Christ tells us that he is present in common prayer, study, and in decision-making, even when only two or three members of the Church are present. Christ is to be found in community.

There are only two places in all the four Gospels where Christ uses the word for the Church that is found in this Gospel reading, the word εκκλησία (ekklesia): the first time is in Matthew 16: 18, when Christ relates the Church to a confession of faith by the Apostle Peter, the rock-solid foundational faith of Saint Peter, which we heard about two weeks ago [23 August 2020].

His second use of this word is not once but twice in one verse in this morning’s reading (Matthew 18: 17).

It is a peculiar word for Christ to use, and yet he only speaks of the Church in these terms on these two occasions.

In total, the word εκκλησία appears 114 times in the New Testament (four verses in the Acts of the Apostles, 58 times by Saint Pauline in his epistles, twice in the Letter to the Hebrews, once in the Epistle of James, three times in III John, and in 19 verses in the Book of Revelation). But Christ only uses the word twice, in these incidents in Saint Matthew’s Gospel.

How does Christ define the Church?

What makes up and defines the Church?

And why, throughout the Gospels, does Christ use this word to describe the Church only twice?

During the pandemic shutdown, when many of our church buildings remained closed, many of us comforted ourselves with phrases such as ‘the church is not a building’ and ‘people make the church.’

The Irish language expresses this in a different way. The Irish word eaglais, which comes from this same word εκκλησία, is usually used for a church building, although the word teampaill is used too, and eaglais is also used for the Church as institution, so that the Church of Ireland is called Eaglais na hÉireann in Irish.

But when referring to the Church as the people, the Irish language uses the phrase Pobal Dé, the ‘People of God.’

The English word ‘church’ we use in everyday English can be traced through Old English (cirice) and Old High German (kirihha) to a Greek word κυριακόν (kuriakón), that simply means ‘of the Lord.’

But the word εκκλησία (ekklesia) does not mean ‘belonging to the Lord.’ Even if that is implied, the word is different.

The word Christ uses in this reading, εκκλησία, means ‘called out,’ an assembly of people that is involved in social life, religion and government.

This word εκκλησία goes all the way back to classical Athens, when the city assembly or εκκλησία consisted of all the citizens who had kept their civil rights. From ca 300 BC, the ekklesia met in the Theatre of Dionysus, beneath the slopes of the rock of the Acropolis.

The powers of the εκκλησία were almost unlimited. It met three or four times a month, and it elected and dismissed judges, directed the policy of the city, declared war and made peace, negotiated and ratified treaties and alliances, chose generals and raised taxes.

It was a city assembly in which all members had equal rights and duties, and all citizens took part, regardless of class or status. It had the final say.

Baptism makes us all equal, without discrimination, in the Church.

And the Holy Communion, the Eucharist, is the lived continuation of our Baptism.

For the Apostle Paul, the Church is one body, the Body of Christ, where there is no discrimination among those who are baptised and who share in the sacramental mysteries (see I Corinthians 12: 12-13 and Ephesians 1: 22-23).

And what Christ does in this Gospel reading is not to give power to the Church but to warn us as the Church about the power we already have as εκκλησία and the consequences of how we use that power.

A few verses earlier, in verses we do not read this time (see verses 10-13), Christ reminds us not to despise the little ones, to go after the one sheep from among the 99 that might go astray, to make sure that not even one of the little ones is left to be lost.

And he warns us against the real dangers of trying to use the powers that the Church has in the wrong way.

In the culture and context of the Greek-speaking world of the East Mediterranean, people would know that the εκκλησία, this very particular type of assembly, had the last and final say.

For Christ to say that what the Church approves of or disapproves of has implications of the highest order is not Christ endowing the Church with supernatural powers. Rather, it is warning us of making decisions, going in directions, exercising discrimination, in the Church that will have not merely temporal and worldly but eternal and spiritual consequences.

There can be no petty divisions in the Church, if we are to be true to the meaning of Baptism and the Eucharist which form and sustain us in one body, the Body of Christ. And the Church has to be a haven for those who are the victims of division, discrimination and disaster. Our haven can be their heaven.

When we discriminate against others, the consequences are not just for them, or even for us, but for the whole Church.

In recent months, there have been protests across the United States against police use of brutality and proclaiming ‘Black Lives Matter.’ But the silence of many megachurch and evangelical leaders who have supported President Trump has been hauntingly deafening in these recent months when it comes to racism, and the use of troops on city streets, and other pressing issues such as climate change. In many places, that part of the Church that claims the moral high ground has been found to be morally impoverished.

The first reading (Exodus 12: 1-14), , difficult though it may be to read in our culture today, is a story that people used to recall that in the midst of death and destruction, God could still look down at a people who are oppressed and enslaved, hear their cry, and want them to be free.

Who are the people who are enslaved and oppressed among our neighbours today? The new arrival in direct provision, the immigrant, the homeless family, the people living on their own, those who cannot find meaningful employment after the pandemic lockdown, those who struggle to keep a shop open or to keep a farm going, those who truly have no friends or no-one to listen to?

Would they see that we have taken to heart Saint Paul’s advice that we might have heard to this morning’s Epistle reading (Romans 13: 8-14), ‘Owe no one anything, except to love one another; for the one who loves another has fulfilled the law … Love does no wrong to a neighbour; therefore, love is the fulfilling of the law.’ 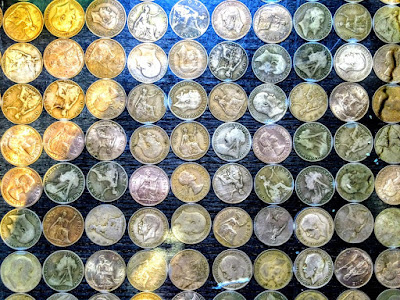 ‘Owe no one anything, except to love one another’ (Romans 13: 8) … old pennies in a bar in Lichfield (Photograph: Patrick Comerford) 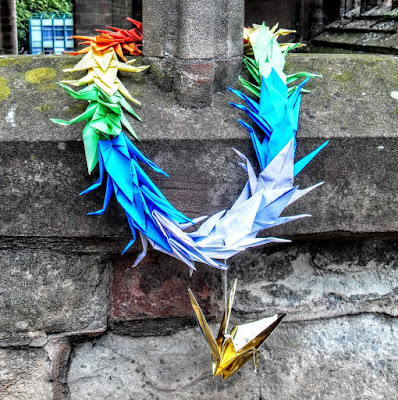 ‘Whatever you bind on earth will be bound in heaven’ (Matthew 18: 18) … paper or origami chains in the shape of cranes, a Japanese symbol of peace and reconciliation, in Coventry Cathedral (Photograph: Patrick Comerford)

O loving God,
enliven and preserve your Church
with your perpetual mercy.
Without your help we mortals will fail;
remove far from us everything that is harmful,
and lead us toward all that gives life and salvation,
through Jesus Christ our Saviour and Lord. 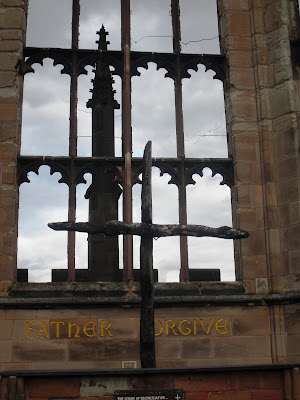 ‘Father Forgive’ … the Cross of Nails in Coventry Cathedral … ‘If two of you agree on earth about anything you ask, it will be done for you by my Father in heaven’ (Matthew 18: 19) … (Photograph: Patrick Comerford) 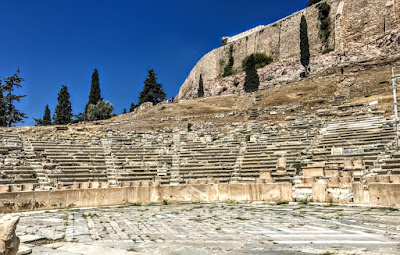 The ekklesia in classical Athens met in the Theatre of Dionysus, beneath the slopes of the Acropolis (Photograph: Patrick Comerford)