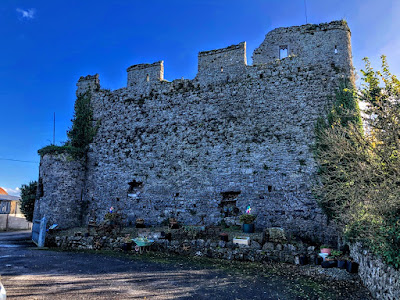 Cappagh Castle, Co Limerick … probably built by the Kinghts of Glin at the end of the 15th century (Photograph: Patrick Comerford, 2020)

While I was visiting Saint James’s Church, Cappagh, at the weekend, I also visited the ruins of Cappagh Castle, at the end of a small road east of this village between near Rathkeale and Askeaton in west Limerick.

Cappagh Castle is said to have been built by Dermott McEinery ca 1199-1216 in the reign of King John. But the present castle which we see today is formed of the ruins of a 70 ft tower house, built ca 1460-1480 by the Knights of Glin.

Cappagh Castle is a tower house and its remains are within an inner bawn, of which just the north and west walls survive. The north side is a strong tower, with an inner and outer enclosure. The outer enclosure has turrets at the eastern angles and the castle is fenced by low crags to the west.

The keep is about 70 ft high and measures 41 ft by 30 ft. It is five storeys high, with the third and fourth storeys resting on vaults. The east end contained the stairs, while the porch and small vaulted rooms were at the south-east.

Cappagh Castle was recorded in 1578, when it was standing on an artificial mound, with five floors and 20 metres in height.

Cappagh House was built in 1607, indicating the change in fashion among landed families away from castles to large houses as their preferred residence.

Cappagh Castle and Callow Castle fell to Irish forces during the Confederate Wars, after a blockade in 1642. The castle was described as ‘ruined’ a little more than a decade later, when the Civil Survey records in 1654-1656 that Cappagh had been held by Gerratt Curnoge, an ‘Irish Papist’, and had been given to Nicholas Dowdall, an English proprietor.

The Peppard family was living at Cappagh from the early 18th century. When the bridge across the River Deel River was built in the townland of Scart in 1747, Cappagh was on the main road from Limerick to Shanagolden.

According to legend, Fitzgerald of Ballyglehane Castle (Hollypark) gave the use of Cappagh Castle to his unmarried brother in 1827. When Fitzgerald’s wife expressed a wish to live at Cappagh Castle, the brother blew up and burned down the castle the day before she was due to move in.

Eyre Lloyd of Wales and William Hammond of Dublin were proprietors of the townland of Cappagh ca 1840. At that time, Robert Peppard lived at Cappagh House, then described as an irregular, two-storey house, part of it built 120 years previously with later additions.

The last family member to live at Cappagh House died in 1938. The house had a number of owners in the 20th century and the interior was badly burnt by fire in 1983 but has since been restored.

As for Cappagh Castle, the banqueting hall was used for many years as a handball court by the Cappagh handball club, the ball being played on the west wall. The club moved to a newly-built court in 1969.

In recent decades, Cappagh Castle was owned by Patrick Fitzgerald, an authority on local history. The castle is now owned by PJ Barry and his family, who live in a bungalow nearby. 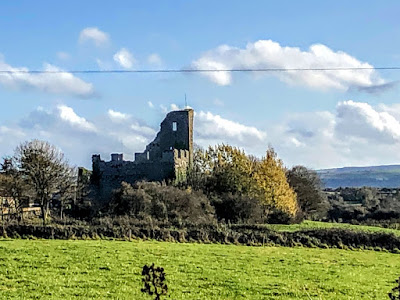 wE LIVED JUST ACROSS A COUPLE OF FIELDS AWAY. i WATCHED MANY A HANDBALL GAME THERE. mY LATE FATHER WAS A REGULAR PLAYER. IT WAS OWNED AT THAT TIME BY PAT FITZGERALD.