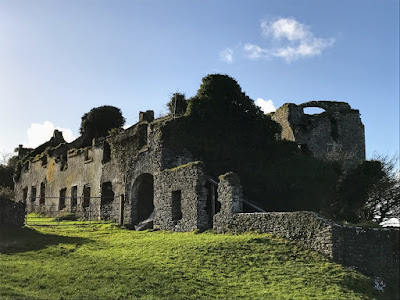 The ruined coastguard cottages with the tower of Beagh Castle in the background (Photograph: Patrick Comerford, 2017)

Sunday was a busy morning, presiding at the Eucharist in Castletown Church, leading Morning Prayer, and preaching in both churches. A large stretch of the estuary of the River Shannon flows through the Rathkeale and Kilnaughtin Group of Parishes, and after lunch, two of us decided to go for a walk along the banks of the Shannon estuary in Ballysteen, about six or seven km north of Askeaton.

The Ballysteen area was once known as Iverus, taking it is name from the Celtic tribe of Uibh Rossa who once lived in this area. As we headed north on Sunday afternoon [12 March 2017], we found ourselves at an old pier and quay on the river bank, looking out across the river towards Shannon Airport, and below the ruins of an ancient castle that has a chequered and colourful history dating back to the Vikings, and that is rich with stories about the mediaeval Knights of Glin and the Waller family who built Castletown Church.

Beagh Castle near Ballysteen stands on about 17 acres and on a promontory on the south side of the Shannon, with long views stretching up and down river, and north across the river estuary to Shannon Airport. 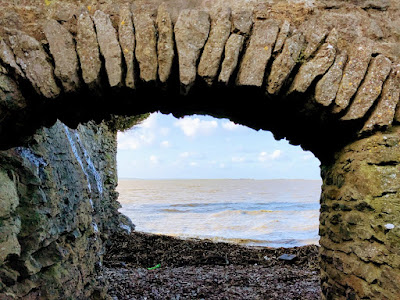 Local people believe Beagh (‘bay’) Castle stands on the site of a Viking settlement. According to the legend, a Viking prince returned to this point on the shore following his conversion to Christianity and built a chapel here in the 820s.

Beagh Castle is said to have been built by the FitzGeralds of Desmond as an outpost fortification in the 13th century on the site of the earlier Viking fortification.

In 1569, Thomas FitzGerald, the 15th Knight of Glin, was executed in Limerick. His mother, who was present at his execution, seized his head when he was beheaded and drank his blood. She then collected the parts of his dismembered body and put them in a linen sheet. When she set out for home with his body she was followed by a large funeral cortege, including 100 keening women.

At some point east of Foynes, perhaps near Beagh Castle and Askeaton, some soldiers tried to seize the dead knight, and in the battle that ensued, many people were slain. The funeral continued, and his body buried in Lislaughtin Abbey, west of Tarbert. 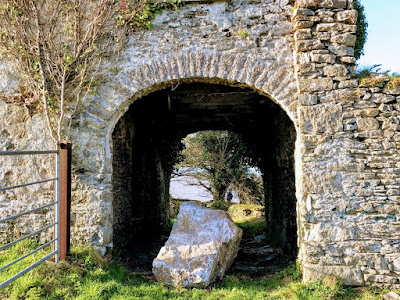 The ruined arch at the entrance to Beagh Castle (Photograph: Patrick Comerford, 2017)

The castle was still held by Edmond FitzThomas FitzGerald, the 14th Knight of Glin, in 1573. But Beagh Castle was confiscated soon after, and in 1578 the castle was handed over to William Drury.

In 1657, the castle was awarded to Sir Hardress Waller (1604-1666), a prominent Cromwellian who was condemned to death three years later for his part in the regicide of Charles I.

As an MP, Waller was knighted by Charles I in 1629. That year, he married Elizabeth Dowdall, the daughter of a landowner in Ireland and he acquired a large estate in Castletown in Kilcornan, Co Limerick.

Waller fought against the against Irish rebels in the 1640s, and he was with Charles I at Oxford in 1643 to present a petition before returning to Ireland to continue his military role under Lord Inchiquin. In 1644, he became the Governor of Cork. But back in Ireland he changed sides and returned to England to take up a command in the Parliamentarian army.

From 1645 until the end of the English Civil War, he commanded a regiment in the New Model Army in England. He was Colonel Pride’s chief assistant when Pride purged the House of Commons in 1648.

Waller as one of the king’s judges and one of those who signed the death warrant. After Charles I was executed in 1649, Waller returned to Ireland, and in 1650 he was a major-general in Cromwell’s force.

When Cromwell returned to England in May 1650, Waller stayed behind in Ireland and joined Henry Ireton and Edmund Ludlow in their campaigns of subjugation. He captured Carlow Castle in July 1650, played a major role in the siege of Limerick in 1651, and became Governor of Limerick.

Waller remained loyal to Cromwell throughout the 1650s, and was MP for Co Clare, Co Limerick and Co Kerry in the Protectorate Parliaments of 1654, 1656 and 1659. He persisted as a Cromwellian republican even in the late 1650s, and he led the officers who seized Dublin Castle in Parliament’s name in December 1659.

Waller seized Dublin Castle once again on 15 February 1660, but with little support he was forced to surrender three days later. He was jailed in Athlone, and then sent to England as a prisoner. After the Restoration of Charles II, he fled to France, but was returned to stand trial as a regicide.

Waller was sentenced to death, but his life was spared through the intervention of his friends. He remained a prisoner and died in jail in Jersey in 1666. 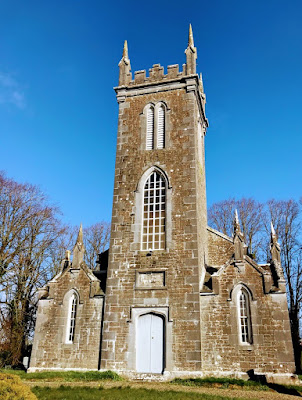 John Waller (1763-1836) of Castetown Manor provided the site and endowed the building of Castletown Church in 1831 (Photograph: Patrick Comerford, 2017)

Sir Hardress Waller’s grandson, John Waller, was the grandfather of John Waller (1763-1836) of Castetown Manor who was an MP for Co Limerick then for Kilmallock, when he voted against the Act of Union. In 1831, he provided the site and endowed the building of Castletown Church, where I began my day yesterday.

When John Waller died in 1836, he was buried in the Waller Vault in Castletown cemetery, and was succeeded by his brother, Bolton Waller (1769-1854) of Castletown. Bolton Waller’s son and heir, the Revd William Waller, held a large estate Castletown and Kilcornan. He in turn was the father of the Revd Thomas John Waller of Castletown and Rector of Kilcornan, who owned 6,636 acres in Co Limerick in the 1870s. John Thomas Waller, the grandson of the Revd Thomas Waller, sold Castletown in 1936, and the house was levelled to the ground in the 1940s. 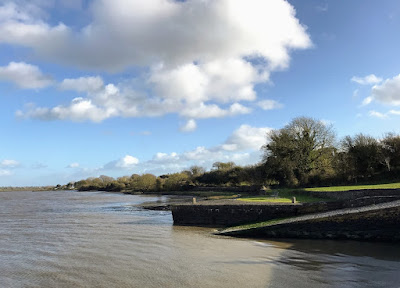 The quay and pier below Beagh Castle, on the south bank of the estuary of the River Shannon (Photograph: Patrick Comerford, 2017)

Meanwhile, Beagh castle served as a defensive outpost on the Shannon during the Napoleonic Wars in the early 19th century.

On 23 May 1827, 25 people took a boat from Beagh Castle to collect seaweed for manure on the islands in the river. But the weather changed, and 12 of them decided to remain on one of the islands while other 13, 11 men and two women, set sail in a violent gale of wind and a heavy sea. The boat was overloaded, and all 13 drowned, their bodies washed ashore in the course of 15 minutes.

In one family alone, nine children were orphaned. On the same day, a sailboat foundered near the mouth of the Deel River, but the crew were rescued and brought to safety at Askeaton.

Later, from 1835 to 1860, the castle served as a coastguard station and five cottages were built beside it for the coastguard officers. There was a quay at Beagh from around 1840, and during this period, the castle was painted by Samuel Brocas in the 1840s, while Commander James Wolfe mentioned the castle ruins in his Sailing Directions for the Shannon Estuary around 1848.

There was a proposal in 1850 to locate the Transatlantic Packet Station off Beagh Castle, but instead the choice went to the then small town of Southampton.

In his Sights and Scenes in our Fatherland (1863), Thomas Lacy of Wexford wrote of a passage down the estuary from Limerick, passing the ‘old ruin’ of Beagh Castle and the coastguard station.

The English architect, Edward William Godwin (1833-1886) visited Beagh Castle in 1869 while he was carrying out research for Dromore Castle, Co Limerick, on behalf of the Earl of Limerick.

The pier adjoining the castle was used as a stopping point for the Shannon packet steamer in the late 19th and early 20th century. To facilitate this, the road was extended to meet the quay and the quay was rebuilt in 1904 with rusticated, snecked limestone retaining walls, a limestone slipway, a parapet wall to the west elevation of the pier, limestone bollards to the east and cast iron bollards along the main quay. 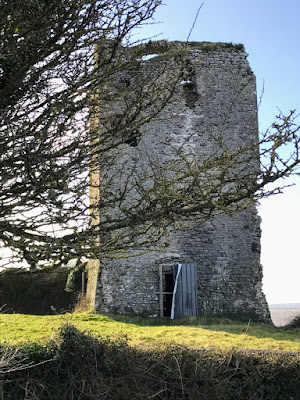 Beagh Castle was recently placed on the market for the first time since 1969 (Photograph: Patrick Comerford, 2017)

In 1969, an Italian count and his American-born wife bought the castle at auction and they gave it as a gift it to their daughter, the latest owner.

In 2009, she got planning permission from Limerick County Council to convert the ruined coastguard cottages on the site into five holiday homes and a management office. The trade-off for the planning permission was that the future of Beagh Castle as a ruin would be safeguarded.

Along with the castle, the site included 17 acres of grazing land around on which the castle stands as well as the row of ruined coastguard cottages. Shannon Airport, its fuel tanks and the fuel jetty could be seen clearly on the other side of the river.

The ruined castle remains an imposing tower house and is a recorded monument and protected structure, with the row of former coastguard cottages tumbling down the hill beside it to the entrance arch.

Beagh Castle is a popular spot on sunny days, and I believe it is possible to swim in the shallow water at the pier when the tide is in. But on this sunny Sunday afternoon we were content to walk along the pier and the quay and to explore the ruins of the castle and the coastguard cottages.