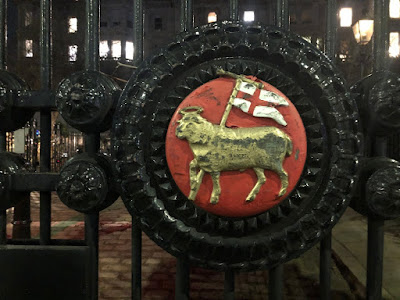 The Lamb of God and the Cross of Saint George … reminders of the Knights Templar on the Victoria Embankment in London (Photograph: Patrick Comerford, 2020)

Although I spent much of the past two days (18-19 November 2020) at a meeting of the trustees of the Anglican USPG (United Society Partners in the Gospel), responses to the pandemic mean the meeting took place virtually, hosted by Zoom, and I missed a planned overnight stay in London.

I have used these regular visits to London as an opportunity before or after meetings to visit buildings and sites of historical, architectural and ecclesiastical interest.

Had it been possible to attend the meeting in person, I had plans to visit one, if not all, of three sites I had noticed on working visits to London earlier this year, when I thought each was worth loser attention: Middle Temple and the Temple Church, off the Victoria Embankment; the site of the first Bethlehem Hospital, close to Liverpool Street Station; and the site of the Priory of the Holy Trinity, close to Bevis Marks Synagogue.

Walking along Victoria Embankment after visits to the House of Lords and Westminster Abbey earlier this year, I noticed on the gate of the Middle Temple that the emblem of Middle Temple consists of the Lamb of God with a flag bearing the Saint George’s Cross. This symbol appears in the centre of the Inn’s coat of arms, against a background consisting of the same cross.

The Honourable Society of the Middle Temple, commonly known as Middle Temple, is one of the four Inns of Court exclusively entitled to call their members to the English Bar as barristers. The others are the Inner Temple, Gray’s Inn and Lincoln’s Inn.

Middle Temple behaves as an independent enclave. Its rights as a local council are not defined by an act of parliament or legislation but are set out in a quasi-secretive decree issued by the Privy Council known as the Temples Order 1971.

In all, Middle Temple owns 43 buildings, many of them listed buildings. The ones in the Temple itself are still held under a grant from James I in 1606, but others were bought later. Some buildings are modern, replacing ones destroyed in the Blitz, but others date back to the 16th century. Middle Temple is jointly responsible with the Inner Temple for the Temple Church.

These anomalies in the church and local government organisation, date back to the 12th and early 13th centuries, when the clergy were the primary teachers of law in the City of London, and the houses of the Knights Templar in 13th and 14th centuries.

A papal bull in 1218 prohibited the clergy from practising in the secular courts, and law began to be practised and taught by laymen. To protect their schools from competition, Henry II and later Henry III issued proclamations that prohibited teaching civil law within the City of London. The common law lawyers moved to Holborn, where it was easy to get to the law courts at Westminster Hall and yet just outside the City. They were based in guilds, which in time became the inns of court.

The Knights Hospitaller, also known as the Knights of Rhodes and later the Knights of Malta, leased the premises at the Temple to the lawyers again in 1346. The east part, which would became Inner Temple, was leased to lawyers from Thavie’s Inn, an Inn of Chancery in Holborn; the west part was leased to lawyers from Saint George’s Inn. This may explain why the Cross of Saint George remains part of the coat-of-arms of Middle Temple today.

After Henry VIII confiscated the Temple from the Knights Hospitaller in 1540, each Inn continued to hold its share of the Temple as tenants of the Crown for £10 a year. James I granted the Temple to them jointly in 1608. Much of Middle Temple was destroyed in a fire in 1678 that caused more damage to the Inn than the Great Fire of 1666.

The Inns continued as colleges for educating lawyers until 1852. They continue to provide education and support in areas such as advocacy and ethics for students, pupil barristers and new barristers. Most of the Inn is occupied by barristers’ offices, known as chambers.

The Temple Church, between Fleet Street and the River Thames, was built by the Knights Templar as their English headquarters and was consecrated by Heraclius, the Latin Patriarch of Jerusalem, in 1185.

In the reign of King John (1199-1216), the Temple served as the royal treasury, with the Knights Templar in a role equivalent in those days of international bankers. It is a round church, a common design feature for Templar churches. It was heavily damaged by German bombing during World War II and has since been restored and rebuilt.

The area around the Temple Church is known as the Temple. It gives its name to Temple Bar, an ornamental processional gateway that once stood in the middle of Fleet Street, and the Temple Underground station nearby. 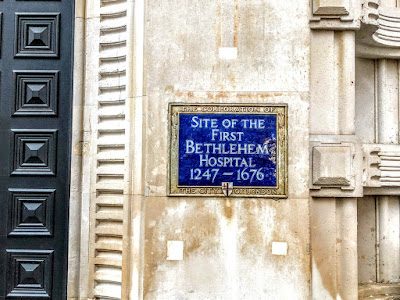 A plaque at Liverpool Street station marks the ‘Site of the First Bethlehem Hospital 1247-1676.’

A priory for the Order of the Star of Bethlehem was built on Bishopsgate at Liverpool Street in 1247, when Simon FitzMary, Alderman and Sheriff, gave his land and houses to the Latin Bishop of Bethlehem, the Italian Goffredo de Prefetti, to found the Priory of Saint Mary of Bethlehem north of Saint Botolph’s Church.

A century later, the priory started admitting patients in 1357. This was probably the world’s first institution to specialise in mental illness. But it developed into a horrible place, known as Bedlam, dedicated to the commitment of the insane.

By 1403, ‘lunatic’ patients formed the majority of the patients at the Bethlehem, Bethlem or Bedlam, and so England’s first and most infamous mental hospital was born.

After the suppression of monastic houses at the Reformation, the Priory of Saint Mary of Bethlehem became the Bethlehem Hospital for Lunatics.

Bedlam continued to function as a psychiatric hospital, although many of the patients in fact suffered from epilepsy, learning disabilities and dementia. Inside, the squalid single-storey building housed 12 cells, a kitchen, staff accommodation and an exercise yard, where inmates were manacled and chained – and treated as a tourist attraction by Londoners who paid a penny to stare at them.

The hospital moved to a site at London Wall in 1676, and it this building was adorned with the Cibber statues of Raving and Melancholy Madness.

Bedlam moved again in 1815 to the Saint George’s Fields site in Southwark, which at the time was owned by the City of London. Then, in 1930, it moved out to a site near Beckenham, and the Southwark buildings became the Imperial War Museum.

The ‘Site of the Priory of the Holy Trinity Founded 1108’ near Bevis Marks Synagogue (Photograph: Patrick Comerford, 2020)

The Priory of the Holy Trinity, also known as Christchurch Aldgate, was founded for the Austin canons or Black Canons ca 1108 by Queen Matilda, wife of King Henry I. She was advised and helped in the foundation by Saint Anselm, Archbishop of Canterbury.

The house was founded with clergy from Saint Botolph’s Priory, Colchester, and the first prior, Norman, was the queen’s confessor. By 1115, the liberty of East Smithfield passed to the Church of Holy Trinity within Aldgate by 1115, and the prior was ex officio an Alderman of London.

Two of Queen Matilda’s children were buried in the Priory, which had a reputation as a centre of learning.

The priory was dissolved in 1552 at the dissolution of monastic houses during the Reformation, and its buildings and lands were given or sold, to favoured courtiers and City merchants.

None of the buildings survives today, apart from some pointed arches inside as office building on the corner of Aldgate and Mitre Street. Mitre Street follows roughly the line of the nave of the priory church, while Mitre Square corresponds roughly to the former cloister. 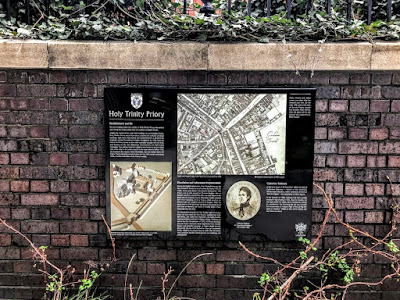 A plaque on a wall tells the story of Holy Trinity Priory … but nothing remains of the priory buildings (Photograph: Patrick Comerford, 2020)