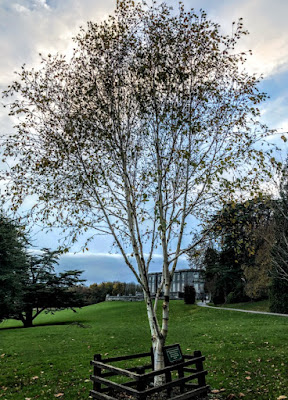 Two of us went for a walk in Curraghchase Forest Park, near Askeaton and Kilcornan, in the fading lights late yesterday afternoon (6 November 2020). Although winter is beginning to close in, it still felt like late autumn with golden and brown leaves falling from the trees and covering the paths and the grass in autumnal blankets.

Among the cedar trees in an open green space below the ruins of the old de Vere family mansion – once the family home of the poet Aubrey de Vere – is a Betula Utilis Var Jacquemontii or West Himalayan Birch, also known as the Kashmir birch, planted by Ger McDonnell from nearby Kilcornan, who with his team conquered Mount Everest in May 2003.

Five years later, he died on 2 August 2008, along with 10 other mountaineers, following an avalanche on the descent from K2. It was the deadliest accident in the history of K2 mountaineering.

Today, Gerard McDonnell (1971-2008) from Kilcornan is remembered as a mountaineer who conquered Mount Everest and who was the first Irish person to reach the summit of K2, the second-highest mountain on Earth, in August 2008.

Ger McDonnell was born on 20 January 1971, a son of Denis and Gertie (O’Donoghue) McDonnell, of Killeen, Kilcornan, Co Limerick. He was educated at Kilcornan National School, Colaiste Mhuire, Askeaton, and Dublin City University, where he received a degree in electrical engineering.

After graduating at DCU, he moved to the US in 1996 and settled in Anchorage, Alaska. There he hoped to work and to develop his skills as a mountaineer and in outdoor survival skills.

He was well known in Anchorage’s Irish community. His interests included playing the bodhrán in a band, and he was described as a ‘philosopher’ and a ‘great storyteller.’

He reached the summit of Mount Everest with Mick Murphy in 2003. He was unsuccessful in an attempt on K2 in 2006, when he was hit by a rock and airlifted to hospital. He was also part of a successful expedition to the South Pole.

He made a second attempt to climb K2 in August 2008 from Karakoram in Pakistan.

McDonnell’s group had been on a mammoth expedition for eight weeks, surviving in sub-zero temperatures. In an online despatch, he said that after the team set 31 July as their date for the summit bid, spirits were high. ‘Let luck and good fortune prevail, fingers crossed,’ he wrote. However, following the avalanche, a serac fell, cutting all the fixed lines on his and his fellow members of the Dutch-led Norit K2 Expedition’s path.

While coming down off the mountain, he was killed after saving the lives of three other climbers. Ten other members of the team were also killed when they were trapped in an avalanche.

He died on 2 August 2008 and, despite an extensive search, his body was never found. His death and the exact sequence of events on the treacherous mountain remain shrouded in mystery. It was said by the surviving team members that Ger refused to descend because he was helping the others who were injured.

The expedition leader Wilco van Rooijen (40), a Dutch climber who was airlifted to a military hospital in Pakistan after surviving the accident, said that poor preparations had contributed to the disaster. He suggested that advance climbers laid ropes in the wrong places on the mountain, hampering the climb of several teams of mountaineers, contributing to the deaths of three climbers on his team.

Ger McDonnell’s partner, his brother JJ and sister Denise flew to Islamabad in Pakistan, where K2 is on the border between Pakistan and China, in search of answers. Ger McDonnell’s body was never recovered, but a memorial service was held in Kilcornan on 17 August 2008.

President Mary McAleese was among the dignitaries to pay tribute to him after his successful Everest climb in 2003 and in 2008 following his death.

McDonnell’s mother, brother, partner, van Rooijen and Pat Falvey later appeared on The Late Late Show on 3 October 2008. A memorial fund was set up in his honour in 2009 to provide first-aid training and safe climbing technique for high-altitude porters.

A plaque in his honour now stands on top of Ireland’s tallest peak, Carrauntoohill, Co Kerry. His former fellow students set up a Living Trust in his memory. In 2010 he was posthumously awarded the prestigious International Alpine Solidarity Award, the Targa d’Argento Pinzolo, for his unselfish help to other climbers who got into difficulties, not only on K2 but also on previous expeditions.

Damien O’Brien, who is married to Ger’s sister Denise, is the author of a book about his brother-in-law and his tragic death, The Time Has Come: Ger McDonnell – His Life & Death on K2 (The Collins Press, 2012). The book was launched in Kilcornan by Mike Barry, the first Irish person to walk to the South Pole.

Damien O’Brien says, ‘Ger was A fantastic person. The glass was always half-full with him – he was the kind of guy that when he walked into a room he lit it up with his fantastic smile. He was a brilliant character – he was kind and caring and that is something about him that will always stick out for me.’ 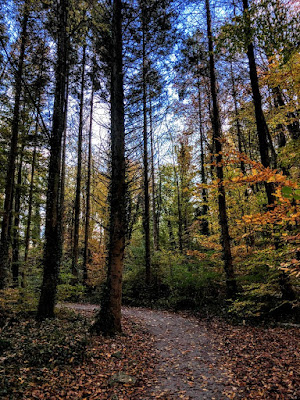