School days and prisoners
at Moneymohill are dim
and distant memories 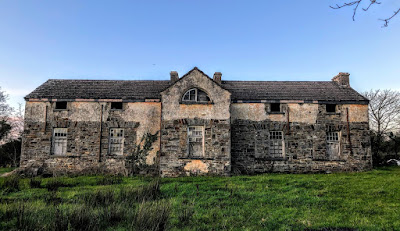 The former school at Moneymohill near Ardagh, Co Limerick … first built as a police station over 200 years ago (Photograph: Patrick Comerford, 2020)

Moneymohill School is a sad-looking building, set back off a side-road near Ardagh in west Limerick, between Ardagh and Ballyhahill. Its windows are blocked up, it stands in a water-logged field and there is no obvious path leading up to the doors through which I imagine generations of children must have passed.

And yet, despite its sad and forlorn appearance, this old schoolhouse retains many of its original details, including the central breakfront and the diminishing windows.

The former dignity of this building is seen in features such as the limestone sills and the lunette window that provide an interesting contrast to the square-headed openings.

The building is set back from the road but stands out in the surrounding landscape.

The former schoolhouse is said to have been first built as a police station for the Royal Irish Constabulary ca 1810. However, the first organised police forces in Ireland did not come about until the Peace Preservation Act was passed in 1814.

The five-bay two-storey building Moneymohill was built ca 1810. It has a central gabled breakfront at the front, facing south. There are pitched slate roofs with rendered chimneystacks, a timber eaves course and cast-iron rainwater goods.

There are square-headed window openings on the ground floor at the front, with tooled limestone sills, roughly dressed stone voussoirs and timber framed windows.

The square-headed openings on the first floor have tooled limestone sills.

The lunette window opening on the first floor of the breakfront has a tooled limestone sill and a timber framed window.

At the back of the building, the back hall was known as the ‘black hole’ where prisoners were kept. 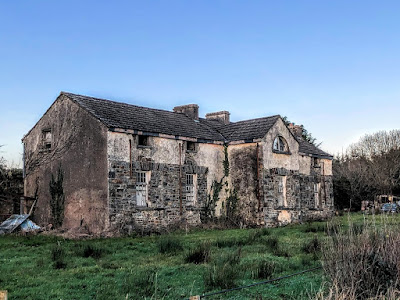 Local tradition says the former school at Moneymohill was a soup kitchen during the Great Famine (Photograph: Patrick Comerford, 2020)

Local tradition recalls that this building served as a soup kitchen during the Great Famine in the 1840s. It was transformed into a school sometime between 1860 and 1880.

On first sight, I wondered why a police station was needed in such a location in the 19th century, and how many children it could have served later on.

But if you look around carefully, there are many deserted and abandoned buildings in the immediate vicinity, including former family homes and shops.

At one time there was a thriving community in this part of West Limerick. But the conditions of the large dump at the Gortnadroma recycling and landfill site to the south eventually made life impossible for people in the area. After persistent demands, they finally closed their doors and were moved to better housing in other parts of west Limerick.

The grounds are waterlogged and overgrown, with an abandoned car and the remains of some farm machinery nearby. The memories of the former police station, soup kitchen and school are fading and becoming part of the dim and distant past. 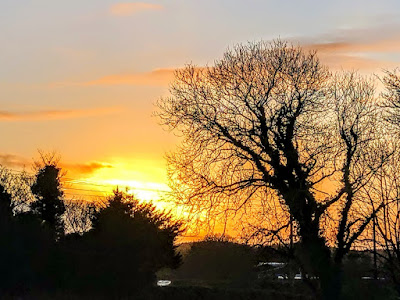 Sunset at the former school at Moneymohill in west Limerick (Photograph: Patrick Comerford, 2020)