A good reason to revisit
the Augustinian priory
ruins in Rathkeale 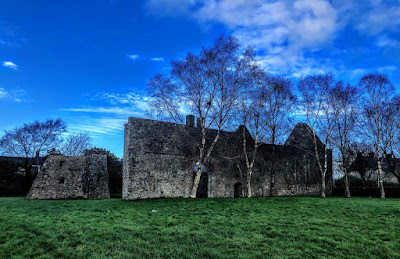 The south side of the ruins of the Augustinian Priory of Saint Mary in Rathkeale, Co Limerick … the church of Rathkeale and nine dependent chapels in Co Limerick were part of the possessions of Keynsham Abbey (Photograph: Patrick Comerford, 2020)

I have spent much of this morning in Rathkeale, at a school Christmas service in Holy Trinity Church. As I was researching my paper last week on Keynsham Abbey in Somerset and its dependent house in Co Limerick, including Saint Mary’s Church, Askeaton, I was interested to come across the many links that also exist between Keynsham Abbey and Rathkeale, Co Limerick.

So, early last week, as part of my research, I returned to visit the ruins of Saint Mary’s, the former Augustinian priory or abbey in Rathkeale.

At the turn of the 12th and 14th centuries, Keynsham Abbey acquired considerable property in Ireland, including the churches at Askeaton, Rathkeale, Lismakeera, Croagh and Bruree in Co Limerick. 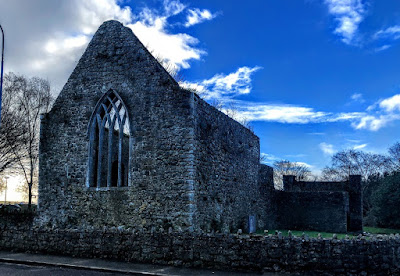 The ruins of Rathkeale Priory seen from the north-east (Photograph: Patrick Comerford, 2020)

Following Roger Waspail’s grant of Rathkeale, Keynsham managed its new benefice, collecting income and appointing clerics. But the politically unstable situation in Ireland made it difficult to collect revenue.

Some time after 1237, under the direction of John de Bureford, a canon of the abbey and their proctor in Ireland, Keynsham granted the church of Rathkeale and nine dependent chapels and property rights in the cantred of Askeaton to the Bishop of Limerick. 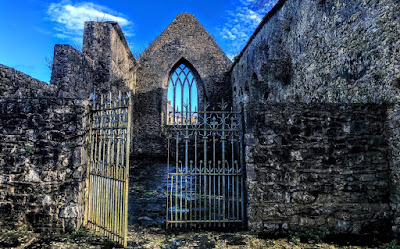 Inside the ruins of the priory church in Rathkeale (Photograph: Patrick Comerford, 2020)

The Augustinians of Keynsham and of Rathkeale followed different traditions and disciplines, and were members of different, distinct orders. The Augustinian Canons of Aroasia were founded in the Diocese of Arras in France in 1097, and were a separate order from the Augustinians at Keynsham.

The number of friars or monks in Rathkeale seems to have been supplemented by Augustinians from Rattoo, 10 km outside Listowel, Co Kerry. The Augustinians in Rattoo were also Aroasian Canons, and their abbot was a Lord of Parliament. 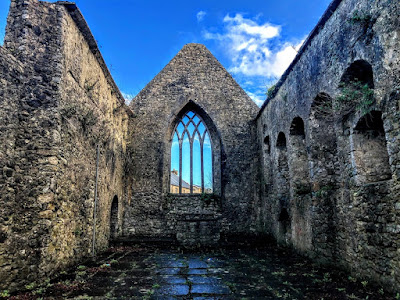 The Augustinian Abbey in Rathkeale was founded in 1280 by Gilbert Hervey (Photograph: Patrick Comerford, 2020)

Soon after the Augustinian Abbey in Rathkeale was founded by Gilbert Hervey, it was endowed by his niece, Elinor Purcell, with the tenth loaf of every baking, the tenth flagon of every brewing, the tenth pork, the tenth mutton and a large portion of every ox killed in the Manor of Mayer or Croagh.

In 1290, Benedict, the Prior of Saint Mary’s, Rathkeale, was involved in a law suit against Thomas Le Chapelin, Guardian of the house of Saint Senan on Scattery Island. 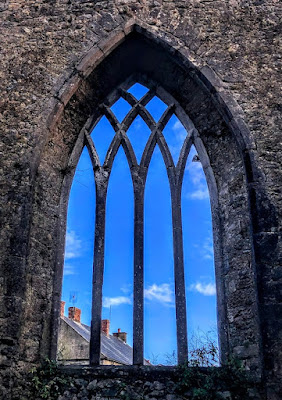 The four-light, tracieried East Window in the ruins of the priory church (Photograph: Patrick Comerford, 2020)

Thomas Purcell was Prior of the Abbey in 1318, when he was accused of violence at Croagh.

Pope Pius III addressed a letter to the prior of Rathkeale in 1463, giving instructions about appointing David Fitzmaurice as the Rector of Randbarad (Ryndbera) in the Diocese of Ardfert. JB Leslie identified this parish with Aglish, north-west of Killarney, between Killarney and Killorgin. Fitzmaurice was also Chancellor of Ardfert.

The priory in Rathkeale owned the mill and a great island and a large part of the water weir. There were six ploughlands and six quarters and it all belonged to the church with all kinds of tithes. 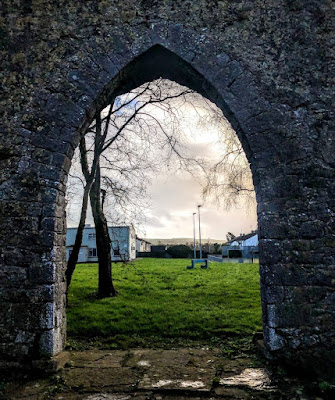 The Gothic arch is all that survives from the former south transept (Photograph: Patrick Comerford, 2020)

According to an inquisition during the reign of Queen Elizabeth I, the priory was in the possession of Gerot Baluff or Gerald Balfe, who was killed during the Desmond Rebellion. After the death of this last prior, the abbey was granted to Sir Henry Wallop, who also received large tracts of land on the banks of the Slaney at Enniscorthy, Co Wexford, and was the ancestor of the Earls of Portsmouth.

Peyton’s Survey in 1586 noted: ‘It was found that the site of the Monastery – a castle called Cam-ne-Monaster, alias The Castle at the Head of the Monastery – together with 20 gardens, one of which was called the Prior’s Garden, contained three acres.’ 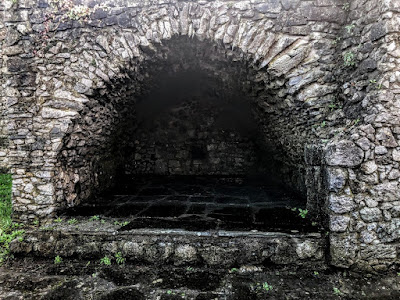 A small, vaulted chamber outside the building, against the north wall (Photograph: Patrick Comerford, 2020)

Although the Augustinian priory in Rathkeale was founded in the late 13th century, the present structures may date from the early 16th century, replacing the earlier buildings on the site. Although its roof is gone and many of its historical details have been lost in time, the abbey is a beautiful, peaceful place.

The ruins include is a rectangular church with a vaulted room at the north side. It has a simple four-light traceried east window.

The south wall is the most complete, but it does not reach its original total length. There are five round headed windows in the south wall of the chancel.

The nave section is in ruins. There was once a south transept, but only the arch of this remains. Another segment of the nave wall stands detached from the rest of the building.

There is a small, vaulted chamber outside the building, against the north wall. 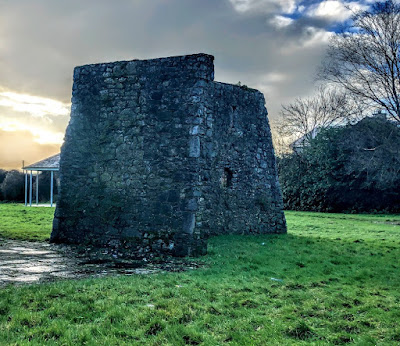 Remains of the abbey building are scattered through the surrounding town park (Photograph: Patrick Comerford, 2020)

In recent years, the ruins were renovated by Rathkeale Community Council and FÁS in 1988 and the surrounding grounds were landscaped and developed as the town's park.

Holy Trinity Church, the Church of Ireland parish church in Rathkeale, stands on a site at the west end of the town that has been a place of worship since the 13th century, although the present church building dates from 1831. 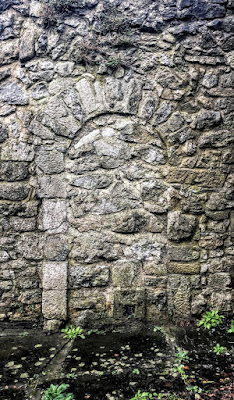 A blocked-up arch in the north wall (Photograph: Patrick Comerford, 2020)

But because the two Augustinians in Rathkeale and Keynsham Abbey followed different traditions, it appears the earlier church on the site of Holy Trinity Church can be identified with the church in Rathkeale that was a dependency of Keynsham.

It is as though Holy Trinity Church at the west end and the ruined Augustinian Abbey at the east end of the town bookend Rathkeale as complementary churches, both with links to the different Augustinian traditions in the mediaeval church. 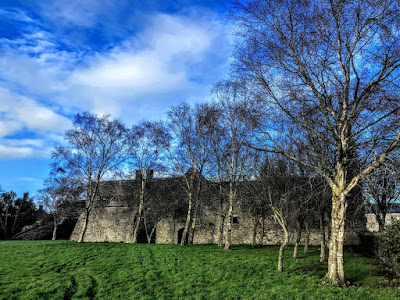 The abbey ruins were renovated by Rathkeale Community Council and FÁS in 1988 and the surrounding grounds were landscaped (Photograph: Patrick Comerford, 2020)