CBS Charleville, the former school of Eamon de Valera, has been on the market since early 2016 (Photograph: Patrick Comerford, 2020)

The former north Cork school that Eamon de Valera attended has been on the market for almost six years.

The former Christian Brothers School in Charleville has been on the market since early 2015, and even had its listing as a protected structure reversed to allow redevelopment, but it has still not sold.

As a teenage schoolboy, the future President Eamon de Valera (1882-1975) walked or cycled seven miles each day from Bruree, Co Limerick, to the school on Main Street, Charleville, for three years, from 1896 to 1898.

In his younger days, the future Fianna Fail leader attended Bruree National School in Co Limerick. At the age of 16, he went to Blackrock College, Co Dublin, on a scholarship.

The CBS school in Charleville dates from 1866. It closed in 1972, when a new school was built. At the end of 2014, Charleville community council and the town’s chamber of commerce sought to have the 8,000 sq ft property delisted, noting it had been remodelled in the 1920s.

The former school is on a 0.43 acre site, with good parking, street frontage, and a further 1,200 sq ft of other buildings.

A local estate agent, PJ O’Gorman, has been quoting a price of €300,000 for the old school, although the website now indicates ‘POA’ (price on application). The premises are close to the AIB bank branch and Dunne’s Stores, and Charleville is a major employment centre in food and engineering, with 3,000 jobs. 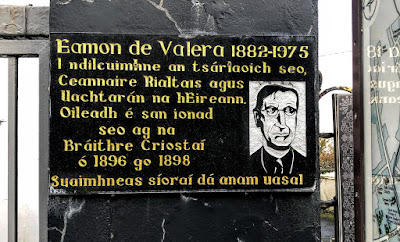 Eamon de Valera is one of the many former past pupils commemorated in plaques at the school gates (Photograph: Patrick Comerford, 2020)

Cardinal Mannix was president of Saint Patrick’s College, Maynooth, when de Valera held a temporary post there as a mathematics professor.

The selling agent’s suggested uses for Dev’s old school include a micro-brewery, a distillery, a retail or outlet centre, a hostel, a restaurant or cookery school, and industrial incubation units. But they are all subject to planning.

The selling agent has many imaginative suggestions for the site (Photograph: Patrick Comerford, 2020)