‘Forever enfold them in
the embrace of Your wings;
secure their souls in eternity’ 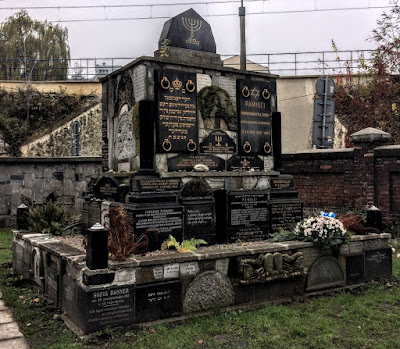 Smashed gravestones in the New Jewish Cemetery in Kraków have been collected to form a Holocaust Memorial (Photograph: Patrick Comerford)

Earlier this week, on Holocaust Memorial Day (27 January 2021), I recalled the many survivors and victims of the Holocaust who had once lived in Ireland, who moved to Ireland, or who died in Ireland.

El Malei Rachamim (אֵל מָלֵא רַחֲמִים, ‘God full of compassion’) is a prayer for the departed that asks for comfort and everlasting care of the deceased. It is usually said at the graveside during the burial service and at memorial services during the year:

God, full of mercy, Who dwells above, provide a sure rest on the wings of the Divine Presence, amongst the holy, pure and glorious who shine like the sky, to the soul of (Hebrew name), son/daughter of (Hebrew name) for the sake of charity which was given to the memory of his/her soul. Therefore, the Merciful One will protect him/her forever in the hiding of his wings, and will tie his/her soul with the rope of life. The Everlasting is his/her heritage, and he/she shall rest peacefully at his/her lying place, and let us say: Amen.

But different versions of this prayer are provided for different moments. The version for the Remembrance of Victims of the Holocaust says:

God, full of mercy, who dwells in the heights, provide a sure rest upon the Divine Presence’s wings, within the range of the holy and the pure, whose shining resemble the sky’s, all the souls of the six million Jews, victims of the European Holocaust, who were murdered, slaughtered, burnt and exterminated for the Sanctification of the Name, by the German Nazi assassins and their helpers from the rest of the peoples. Therefore, the Master of Mercy will protect them forever, from behind the hiding of his wings, and will tie their souls with the rope of life. The Everlasting is their heritage, the Garden of Eden shall be their resting room, and they shall rest peacefully upon their lying place, they will stand for their fate in the end of days, and let us say: Amen.

For my Friday evening reflections and readings this evening, I am reading the version for the Shoah (Holocaust) is found in the Reform prayer book, Mishkan T’filah. I have prayed with this prayer before, and on Holocaust Memorial Day a version of this prayer was circulated among priests in the Diocese of Limerick and Killaloe by the Revd Kevin O’Brien of Ennis, Co Clare:

May their memories be a blessing, זצ״ל