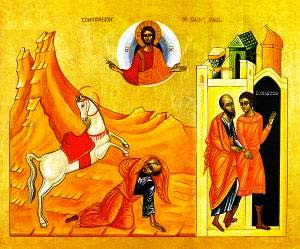 The Conversion of Saint Paul … a modern icon

But, on the road to Damascus, Christ enters Saint Paul’s own inner home, seizes possession of him, takes command of all his energy, and harnesses it so that Paul becomes a slave of Christ in the ministry of reconciliation as a consequence of that one simple sentence: ‘I am Jesus, whom you are persecuting’ (Acts 9: 5b).

Instead of his three denials, Saint Peter is remembered for his confession of faith, his acceptance of Jesus as the Messiah or the Christ, recorded in the three synoptic Gospels (Matthew 16: 13-20; Mark 8: 13-20; Luke 9: 18-20). That Confession of Saint Peter was marked many Church calendars last Monday [18 January 2021].

Today, the Conversion of Saint Paul is celebrated throughout the Church – in the Anglican, Roman Catholic, Lutheran and Orthodox traditions. This day also marks the end of the Week of Prayer for Christian Unity.

The Week of Prayer for Christian Unity – or rather, the Octave of Christian Unity – from 18 to 25 January, linking those two feasts, was first suggested in 1908 by an American Episcopalian or Anglican monk, Father Paul Wattson, who was the superior of the Franciscan Friars of the Atonement, and who reintroduced Franciscan life to the Anglican Communion. 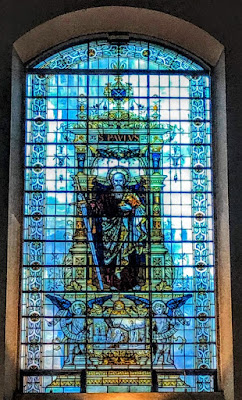 Saint Paul in a stained glass window in Saint Martin within Ludgate, London … the church is in the patronage of the Chapter of Saint Paul’s Cathedral (Photograph: Patrick Comerford, 2020)