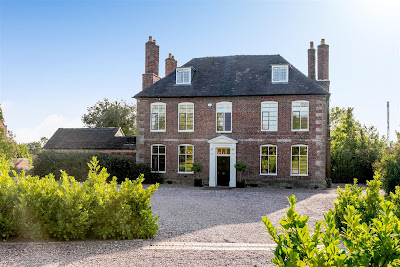 Pipe Hill House was built in 1725 and is on the market with a guide price of £2.5 million

I was writing last week about Wall House, south of Lichfield, which is on the market with an asking price of £4.25 million. But Pipe Hill House is another house of historical and architectural interest on the outskirts of Lichfield that is also on the market.

Pipe Hill House at Pipehill, Lichfield, is a three-storey, five-bedroom, Georgian, brick farmhouse. It was originally built in 1725 and is on the market with a guide price of £2.5 million.

An added point of interest is that Over the last 300 years, Pipe Hill House has been owned by only eight families over the last three centuries. It set in about 6.75 acres and is less than 3 km from the centre of Lichfield.

Pipehill is at the point where the Lichfield-Walsall road crosses the road from Burntwood to Lichfield and Wall. This was once a waste area known known as Pipe Marsh. The hamlet was known in the 14th century as Hardwick or Pipe Hardwick, a name still used in the early 17th century and meaning a livestock farm.
The site of Pipehill Farm on the south-west edge of the waste was occupied in the mid-14th century and the present farmhouse is partly mediaeval. Pipe Hill House to the south dates from the mid-18th century, when it replaced a house that was on the site from the late 17th century.

Nicholas Bull acquired land in Pipehill in 1588 and 1593, and this became the estate later centred on Pipe Hill House. He died in 1627 and the estate passed Richard Bull, who had died by 1655. His son, also Richard Bull, held land at Pipehill, and died in 1660.

Richard Bull who lived at Pipehill and was assessed for tax on five hearths in 1666, died in 1671. He was succeeded by his son, Thomas Bull, who had died by 1689, with a son Thomas Bull as his heir.

In the early 18th century, the estate belonged to another Richard Bull, who sold it to Harvey Green of Lichfield. Harvey Green was succeeded in 1721 by his nephew, John Hartwell, a Lichfield cloth manufacturer. He sold the estate in 1725 to Randle Bradburne, a Birmingham ironmonger and one of the first trustees of Smethwick church, and the Hartwell family seems to have moved to Elford.

Randle Bradburne probably built Pipe Hill House in 1725. His heir was John Bradburne, who in 1751 advertised 200 acres at Pipehill for letting. Most of the estate comprised farmland south of Pipe Hill House and later centred on Pipe Place Farm, built in 1764.

When John Bradburne died in 1779, he was succeeded by his illegitimate son, Samuel Hamson, who changed his name to Samuel Bradburne. He married Ann Fern (1764-1838) from Pipe Ridware in Saint Michael’s Parish, Lichfield, in 1781. He had died by 1834, when his widow Ann was living at Fosseway Court in Pipehill until she died in 1838.

John Hanbury Bradburne married Sophia Fudgeon in Kingsbury, Warwickshire, in 1847. When he died in 1879, he was succeeded at Pipe Hill House by his son, Henry Bradburne, who died around 1893. A year later, in 1894, an estate of 226 acres centred on Pipe Place Farm was put up for sale.

Eliza Bradburne was still at Pipe Hill House in 1900; but she was no longer there by 1904, which indicates she may have died by then. The land was farmed in the 1920s by Walter Ryman of Manor Farm.

Pipe Hill House was owned by Mrs Winifred Elmy in 1986, and the land and Pipe Place Farm were still in the hands of the Ryman family.

An interesting descendant of the Bradburne family was John Randal Bradburne (1921-1979), ‘the Vagabond of God,’ who was a lay English Franciscan missionary, hermit and poet. He was the warden of the Mutemwa leper colony in Mutoko, Rhodesia (now Zimbabwe) when he was kidnapped and murdered. He is a candidate for canonisation in the Catholic Church. 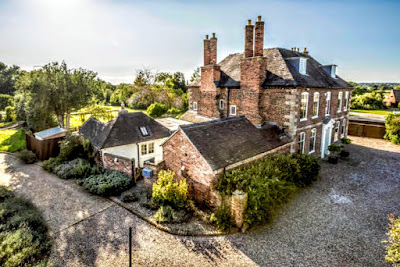 Pipe Hill House has been a 5 Gold Star (AA Highly Commended) boutique Bed and Breakfast for many years.

Pipe Hill House combines a wealth of architectural history and story. This early 18th century house is built of red brick with stone quoins and a flush stone band at first floor level and a plinth. It has a hipped tile roof, massive side stacks with two and three diagonally set shafts above eaves level.

The house is built on an almost square plan, with a two-storey and attic five window front, with two flat-headed dormers over segmental-headed, mullioned and transomed casements.

The central entrance has a moulded surround and consoles to a low pediment, with an over-light and a door with six flush panels. The garden front is similarly complete and the side elevation to the road is blind but is dominated by the massive projecting stack.

The house has a floor area of over 6000 sq ft, and in recent years it has been restored to splendour, with up five generous double bedrooms, all with en-suite bathrooms.

Each room of the original house retains all period window frames and window fixings, with wooden shutters in the ground floor front rooms.

The dining room, garden room and kitchen flood with light from the south-facing lawn. The first-floor rooms have spectacular views. There are two more bedrooms are on the top floor. The house also has a cellar and a courtyard.

The grounds include a semi-formal garden, lower lawn, mature woodland, a vegetable garden and a paddock that is currently a wild meadow but could be ideal for three or four horses.

Pipe Hill House is on the market through Fine & Country of Sutton Coldfield and Lichfield. 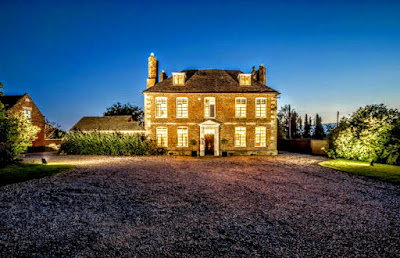 I knew it as aboy when it was owned by Mr & Mrs Elmy. My mother used to clean there.

I remember it to i was born in 1959 and lived in the cottages ,had so many happy memories at pipe hill,