What is the future facing
the former Methodist Church
on Rowe Street, Wexford? 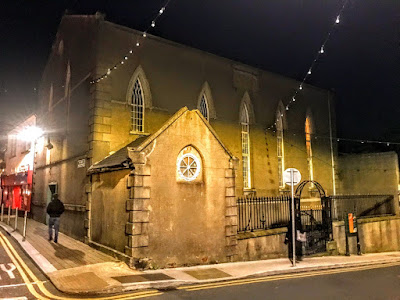 The former Methodist Church on Rowe Street, Wexford, at night-time … what does the future hold for this building? (Photograph: Patrick Comerford)

When I was living on High Street, Wexford, in the early 1970s, the street was ‘bookended’ by two churches at one end and church ruins at the other end: Rowe Street Church, or the Church of the Immaculate Conception, and the Methodist Church on the corners Rowe Street and Mallin Street at the north or west end, and the ruins of the mediaeval Saint Patrick’s Church fronting onto Saint Patrick’s Square at the south or east end of the street. 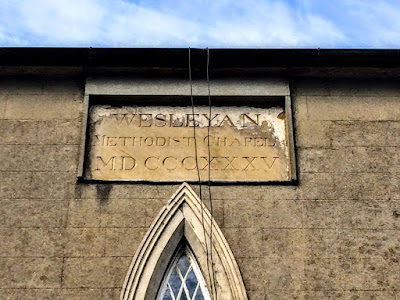 The funeral of the late Dr George Hadden (1882-1973), which I attended, was one of the last services in the church. The church closed in 1973. He was a medical doctor, missionary and historian, and was one of the trustees appointed and named in the Methodist Church in Ireland Act (1915), designed to put of the church on a legal footing in Ireland.

George Hadden and his wife Helena went to China in 1912 as missionary doctors. He was said to have travelled the five continents. In Africa, he followed the course of the Niger. In Russia, he volunteered with a White Army medical corps to qualify as a surgeon.

The Haddens returned to Wexford with their family in 1938. He was the founder of the Old Wexford Society (later the Wexford Historical Society) in 1944, gave monthly historical lectures, and researched and wrote extensively about the origins and development of Wexford town.

Long before the Wexford Opera Festival, he established the Wexford Male Voice Choir, and he was responsible for starting the Wexford tour guides and the festival historical tours.

By then, general permission had been given to sell the church and hall in 1963. The Methodist congregation merged with the congregation of the Presbyterian Church on Anne Street. The church on Rowe Street was first used by Jenkins department store on Main Street, and it was sold in 1995 for £65,000.

The church remains an important component of Wexford’s Victorian church heritage and its composition is of architectural value, and it remains a protected historical building. However, the Wexford People last week [February 2021] reported concerns at plans for a new concert venue in the former church.

The planners are expected to make a decision on the application next month (March 2021). 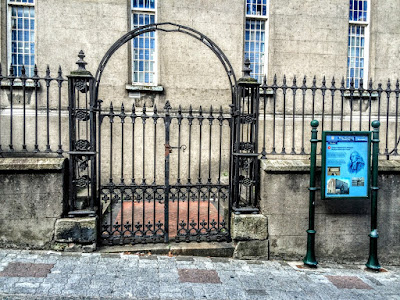 Brilliant informative piece. John Wesley spoke in the Town Hall ( now the Arts Centre) and the committee served a supper of ham and eggs. When I did a "Shellshock Café" show in WAC in 2015 I re-created my "Tookay Café" from 1999 in the pillar room and served a raft of ham from Richie Doyle wrapped around Devilled eggs at the interval. Nobody knew why. 😏