Saint Mary’s, a Gothic
Revival parish church in
the heart of Pallaskenry 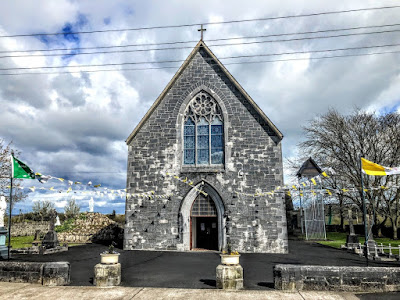 Saint Mary’s Church, Pallaskenry, Co Limerick, is a well-designed and attractive Roman Catholic parish church in the centre of the village. The church, which I visited last weekend, was built in 1863 to replace an earlier church at Whiteforge, and the site of the church was donated by Gerard O’Shea, Jim Nolan and the Ward brothers.

Saint Mary’s is a stone-built nave-and-chancel church with attractive Gothic details, especially in the doorway, and with a well-worked hood-moulding and carved date-stone. A Mr T Sheehan was the architect. 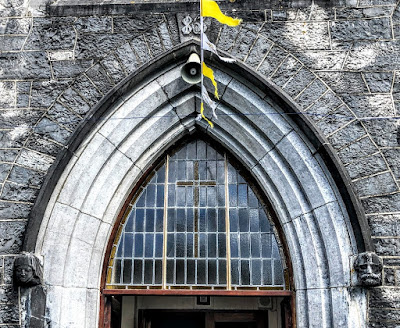 The doorway of Saint Mary’s Church has a well-worked hood-moulding and carved date-stone (Photograph: Patrick Comerford, 2021)

The façade displays of fine stone craftwork and the door surround and other carved elements are of artistic interest, along with the elaborate stone tracery windows and stained glass.

This gable-fronted, double-height church has a five-bay nave, a single-bay chancel at the east end, a single-storey sacristy and a recent extension at the south side. 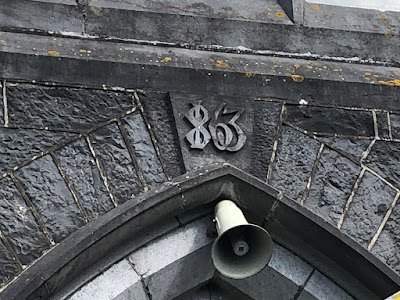 Inside, the church has a double height nave, with a fine open ceiling and a soaring Gothic arch framing the chancel with its tall, three-light window above the altar. The interior features include hammer-beam trusses to the ceiling, timber pews, plastered walls and a timber porch with flanking confessionals. 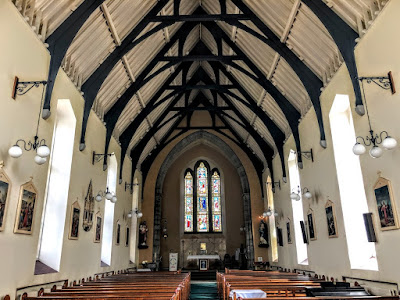 The stained-glass windows above the altar depict a variety of scenes from the life of the Virgin Mary and include Saint Joachim and Saint Anne.

The marble floor in the chancel area has mosaic panels with symbols of the four evangelists and fleur-de-lis and cross motifs. The tabernacle was donated by the architect. 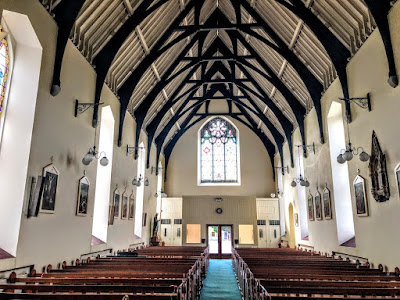 The stained-glass windows on the north side include windows donated by Canon Wallace in 1945, and a window depicting Saint James and Saint John that was a gift of Father John Bourke, parish priest of Pallaskenry for almost 28 years, who was responsible for refurbishing the church.

The stained-glass windows on the south side of the church include gifts from Father John Bourke, including one depicting the Virgin Mary and Saint Joseph, and Canon Wallace. 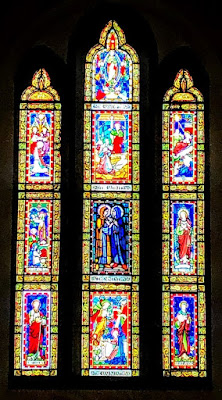 The East Window in Saint Mary’s Church depicts scenes from the life of the Virgin Mary (Photograph: Patrick Comerford, 2021)

A plaque on the north wall commemorates Flight Lieutenant Ted Sheehy of Shannongrove, who was killed in action in December 1944 and who is buried in the churchyard at Saint Mary’s Church of Ireland parish church in Askeaton. 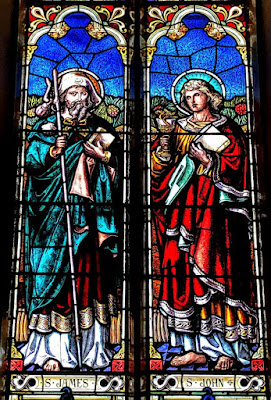 In the grounds of the church, the metal bell tower has pitched roof, and there are carved limestone Celtic crosses, statues, a grotto and the graves of previous parish priests. There is a statue of Saint Brigid to the left (north), and a statue of Saint Anne to the right (south).

The tall Celtic cross in the grounds has abstract decorative motifs on its shaft. This is a mission cross commemorating a mission preached in Pallaskenry by the Redemptorists in 1877. 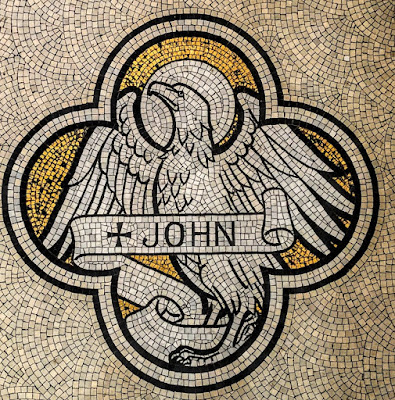 The marble floor in the chancel area has mosaic panels with symbols of the four evangelists (Photograph: Patrick Comerford, 2021)