Saint Patrick’s Church in
Dalkey, built at a quarry
above Bulloch Harbour 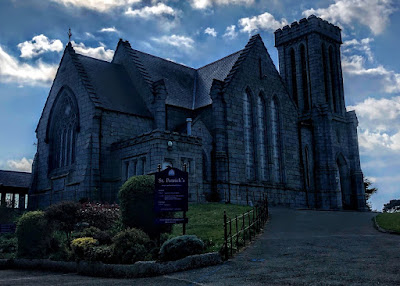 Saint Patrick’s Church is the Church of Ireland parish church in the heritage town of Dalkey, in South County Dublin and dominates the granite outcrop above Bulloch Harbour.

The opening of the Dublin and Kingstown railway in 1834 gave greater access from Dublin to the burgeoning suburbs of south Dublin. In 1836, the need was identified for new churches to serve the growing populations of Dalkey, Bulloch and Sandycove.

The population of the area grew so much over the next 33 years that no fewer than eight churches were built where there was none before. Monkstown Parish Church, dating from the Middle Ages, was replaced with a new church in 1779. A still larger church opened in 1831, with a parish that stretched from Temple Hill at one end to Loughlinstown at the other end.

As each church opened, parish boundaries were adjusted. At first, Saint Matthias’ Church had catered for all of Killiney and Dalkey and as far as Kingstown (Dun Laoghaire). The old church in Dalkey was in ruins by the 17th century, and Dalkey was part of Monkstown parish until the 19th century.

A garrison of soldiers was still stationed in the Martello Tower and Battery on Dalkey Island In the 1830s and 1840s. All the other Martello Towers had been abandoned in the 1820s, but through an oversight at the War Office, the Dalkey Island garrison was overlooked and continued to enjoy free accommodation and allowances for a further 20 years. There are records of marriages, births and deaths of people who lived on the island, but Dalkey Island has had no inhabitants since the 1850s.

With the increased travel opportunities and mobility offered by the railways and buses, large villas were built in Dalkey for summer accommodation, and new houses were built along the coast at Coliemore Road and part of the north end of Vico Road.

The needs for a church in Dalkey led to formation of trustees to build a new church first known as Dalkey Episcopal Chapel of Ease, within the Parish of Monkstown. Numerous sites were examined, and the present site was offered free by the Ballast Board of Dublin Port, later Dublin Port Company. The land was being quarried for stone shipped from Bulloch Harbour, and the site was reached by the private Ballast Office Road, now Harbour Road 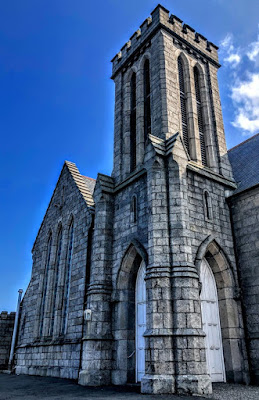 The Archbishop of Dublin consented to the new church and plans and estimates were accepted in 1837 from the architect John Howard Louch who, at the same time, was designing a new trustee church in Harold’s Cross. But in 1839, Jacob Owen (1778-1856), won the design contract for a plan with 500 seats on the ground floor and 168 in the gallery, at an estimated cost of £1,600. The church was built by a Mr Hickey began, and the foundation stone laid on 24 June 1840.

Jacob Owen was engineer and architect to the Board of Public Works (1832-1856). He was born in Llanfihangel, Montgomeryshire, North Wales on 28 July 1778, the son of Jacob Owen and his wife Margaret, née Ellis, and went to school in Monmouth before becoming a pupil of the English canal engineer William Underhill.

Owen then went to London, where he joined the Royal Engineers Department of the Ordnance in 1805. For most of his career with the Board of Ordnance, he was based in Portsmouth, where he also ran a private practice with his son, Thomas Ellis Owen.

On the recommendation of Colonel John Fox Burgoyne, chair of the new Board of Public Works in Ireland, Owen appointed architect and engineer to the board in 1832.

After he retired in 1856, Owen continued to be involved in the affairs of the RIAI, which he had joined in 1839. He founded the Irish Civil Service Building Society with James Higgins Owen in 1864. He moved to Southsea, Hampshire, and died of cancer at Toll End, Tipton, Staffordshire, the home of his daughter Mary Anne and her husband, Dr Thomas Underhill, on 29 October 1870. He was buried in the family vault in Mount Jerome Cemetery. 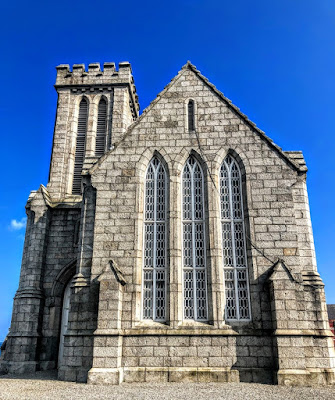 Meanwhile, the church in Dalkey was completed in 1843, and Archbishop Richard Whately of Dublin preached at the opening service on Sunday 5 March 1843.

Only the west (rear) and north transept galleries were included in the original church, but it was always planned to increase the seating capacity. This happened in 1853, when the church was developed by Joseph Welland, architect to the ecclesiastical commissioners, at an estimated cost of £315.

Welland added a south transept gallery and stairway, a small organ loft on the north side, an enlarged west gallery, a central three-decker pulpit, a reader’s desk and Holy Table behind a curved communion rail, and a robing room where the chancel now stands.

Because the church had was not sufficiently endowed, its consecration was delayed. After a 30-year delay, the church was consecrated on 20 August 1868 and dedicated to Saint Patrick. It became a parish church and was assigned a parochial district from Monkstown parish.

Several structural alterations were made to the church in 1879. At that time, there was no chancel, and there was an old-fashioned three-decker wooden pulpit and straight-back box pews. The alterations included the addition of the chancel, vestry room, organ chamber, new pews and the redecoration of the church. They were designed by Edward Carson; the work was completed within 10 months, and the church reopened on Sunday 14 December 1879. 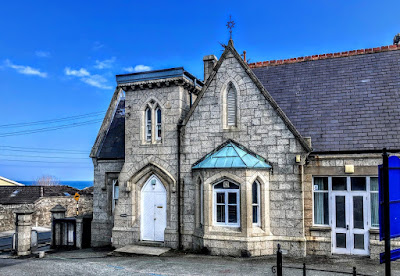 The church is distinguished by the square tower with long narrow openings. It is rather squat, cruciform in plan, with three lancet windows in the transepts. The square apse has a large east window in which is set unusual Star of David tracery.

In the early 1890s, pink and green tinted glazing was installed in the tall lancet windows that did not already have stained glass. The great bell was presented to mark Queen Victoria’s diamond jubilee in 1897.

Saint Patrick’s was originally a trustee church, and the trustees appointed the incumbent and managed church endowments. On the proposal of Bishop Maurice Day of Clogher, the trustees agreed in on 22 October 1909 to transfer the church, its property and its endowments to the Representative Church Body of the Church of Ireland.

Wet and dry rot were found throughout the church in 1955-1956, and the roof, windows and three galleries were removed. Only the west (rear) gallery was replaced, and it reinforced to accommodate boarders from Castle Park on Sunday mornings. The robed boys’ choir from the school sat at the front of the church.

The pulpit was moved closer to the organ to improve the sight lines, and the prayer desk was turned sideways, the tower was refurbished, new cedar louvres were fitted to the belfry, and the west window was reframed in teak to replace rotten softwood.

Charles Leslie JP presented the church with a cut-stone sexton’s lodge and schoolhouse in 1870, built at his own expense and designed by the Dublin architect Edward Carson, father of Sir Edward Carson. The granite was quarried on the site.

The original hall served as a classroom, Sunday school and parish meeting room, while the front room in the lodge was used as a library.

The whole complex was totally upgraded and extended in 1999, when a new school building was added, with an upper-level covered link to the church. The modern design by the architect was David Jordan harmonises with the older buildings on the site. 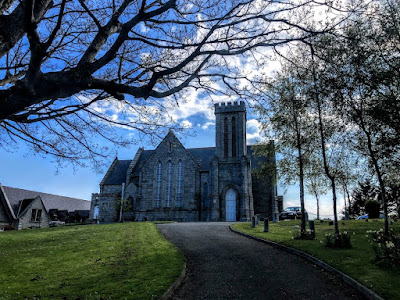