Dan Hayes, ‘an Honest Man’,
a rake and libertine, and
the secret author of ‘Hamlet’ 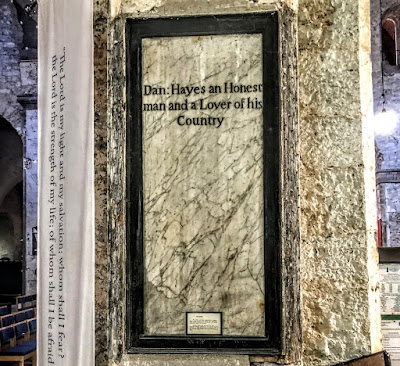 A simply worded monument in Saint Mary’s Cathedral, Limerick, recalls Dan Hayes, ‘an Honest man’ … but who was he, and why is most of his monument left blank? (Photograph: Patrick Comerford, 2021)

After this week’s lunchtime lecture on John Desmond Bernal in Saint Mary’s Cathedral, Limerick, I spent some time looking at some of the cathedral monuments and memorials, including those to the Haydn and Rogers families, with their connections to cathedral music.

One monument near the welcome desk and the south porch of the cathedral bears a laconic epitaph, ‘Dan: Hayes an Honest man and a Lover of his Country,’ that takes up a tiny proportion of memorial space, while the rest of white marble is left blank, without any words to fill the empty spaces.

Daniel Hayes, also known as ‘Buck Hayes’ and ‘Count Hayes,’ was born near Glenogra Castle, near Bruff, Co Limerick, ca 1733, and was educated by the Revd Jacques Ingram, before going on to study at Trinity College Dublin in 1750. He was a Fellow Commoner at TCD, and began but never finished a translation of Cicero.

His ‘Farewell to Limerick’ is regarded as ‘a powerful satire on the state of society in the city in 1751.’

He then studied at the Middle Temple, London, but never qualified as a barrister. It is said news of the death of his mother affected him very deeply.

A biographical notice says ‘he lived a fashionable life’ in London. But this is explained in another account that says that for a while ‘he lost touch with the decencies of life and became buck, libertine and drunk all at one.’

In his lifetime, Hayes published an Ode on ‘The Immortality of the Muses’, his ‘Ode to Authors’, and an ‘Epistle from the Abbé de Rancé.’ This epistle purports to be an account of the conversion of Armand-Jean Le Bouthillier de Rancé (1626-1700), who turned from a worldly to a spiritual life and became the founder of the Trappist reform among the Cistercians. However, the epistle, in reality, is said to be an account of how Hayes turned around his own life.

In a letter to friends in Limerick in 1762, he said, ‘The future maxim of my life shall be to steer wide of all parties, ruptures and dissentions; you are sure of enemies, who will engrave your actions on a table of brass; of friends who will commit them to a rotten cabbage leaf.’

Hayes died in Kensington at the early age of 34 on 20 July 1767. In his will, he asked for his body to be brought back from London to Limerick and buried in Saint Mary’s Cathedral, where he is buried in the South Transept, below his monument.

Dean Maurice Talbot, in The Monuments of St Mary’s Cathedral, recalls that Hayes designed and worded his own memorial in the hope that some friends or family members would step forward and add ‘some other kindly words.’ His hopes were never realised.

He left his fortune towards building a hospital for the sick and wounded in Limerick. If it was not used for this to augment the Sizar’s Fund in TCD. However, his family successfully contested the will, and his intended bequests were never realised either.

Instead, Hayes is best remembered for a playbill issued over quarter of a century after his death by the Theatre Royal in Kilkenny in 1793:

‘On Sunday, May 14th, will be performed by command of several respectable people in the learned metropolis, for the benefit of Mr Kearns, the tragedy of Hamlet, originally written and composed by the celebrated Dan Hayes of Limerick, and inserted in Shakespeare’s works, Hamlet by Mr Kearns who, between the acts, will perform several solos on the patent bagpipes, which play two tunes at the same time.

‘Ophelia, by Mrs Prior, who will introduce several familiar airs in character, particularly The Lass of Richmond Hill and We’ll be Happy Together.

‘The parts of the King and Queen, by direction of the Rev Mr O’Callaghan, will be omitted as too immoral for any stage.

‘Polonius, the comic politician, by a Young Gentleman.

‘The Ghost, the Grave Digger and Laertes, by Mr Sampson, the great London comedian.

‘The characters will be dressed in Roman Shapes.

‘Tickets to be had of Mr Kearns at the Sign of the Goat’s Beard, in Castle Street. The value of the tickets to be taken (if required) in candles, butter, cheese, soap, etc, as Mr Kearns wishes in every particular to accommodate the public.

‘No person will be admitted into the boxes without shoes or stockings.’

If Claudius and Gertrude were ‘be omitted as too immoral for any stage,’ it seems difficult to understand how people could follow the play, let alone the play within the play.

I never understood Polonius as a ‘comic politician’, and I shudder at the thought of Ophelia, as she drowns, singing a jolly rendition of ‘We’ll be Happy Together,’ accompanied by a solo on the bagpipes. I wonder, too, who played the parts of Rosencrantz and Guildenstern, and who, alas, provided poor Yorick’s skull.

Perhaps Hayes’s friends preferred to commit their praises to ‘a rotten cabbage leaf’ rather than filling the blank marble spaces on his monument. But, on the other hand, perhaps there is another reason for Hayes never completing the text for his monument in Saint Mary’s Cathedral: he was too busy writing Hamlet!