From Cambridge to Cappoquin,
an Irish enthusiasm for rowing 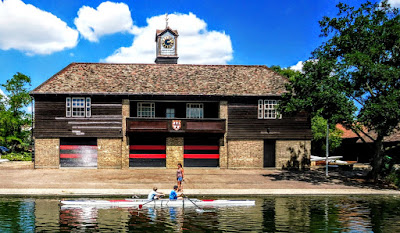 The performance of Irish rowers at the European championships in Varese this April has been a sporting triumph that has been overshadowed in sports coverage by Rachel Blackmore’s string of racing successes.

At an international level, the Irish performance at soccer is greatly overshadowed by the performance of Irish teams in other disciplines, including rugby, cricket and rowing. Yet soccer seems to dominate weekend sports coverage in Irish newspapers and on television.

Perhaps this reflects the childhood obsessions of many sports journalists and commissioning editors, and boyhood fascinations with English soccer. I have been an Aston Villa fan since my childhood, but I would prefer to spend a lazy weekend afternoon watching rugby, cricket or rowing.

My clerical colleagues know what it is to crash out on the sofa on the afternoon of Easter Day. This year, that afternoon was all the more enjoyable for me because it coincided with the Boat Race, which was a double success for Cambridge, with the men winning the race for the third consecutive year and the women winning earlier in the afternoon.

The Cambridge teams had to learn to adapt to an unfamiliar training programme, continuing to make physiological and technical improvements despite being unable to train on the water or in the Goldie Boathouse gym. For the majority of the team, lockdowns meant carrying out the programme alone, often in their bedrooms.

The Boat Race is one of the major events in the English sporting calendar, alongside the Aintree Grand National and the FA Cup Final, test matches at Lords and rugby internationals at Twickenham. Yet, it was difficult to find any substantial coverage in Irish newspapers the following day.

One Irish journalist based her report on television coverage and said the venue ‘looked a little bit like a weedy canal in the middle of nowhere. The Great Ouse in Ely, Cambridgeshire, to be exact, but that’s sort of the same thing.’

Ely Cathedral is one of the seven wonders of the mediaeval world and is referred to with affection as ‘the Ship of the Fens.’ But cultural prejudice and historical ignorance trumped any appropriate sporting journalism that morning.

I sometimes think anti-English racism is the only permissible form of openly expressed prejudice in Ireland. Those thoughts were confirmed as the writer amused herself by observing how ‘the organisers didn’t want a heap of Barnabys, Marmadukes, Montagues and Hugos tumbling into the river as the race passed underneath.’

Had she written in the same tones about working class supporters of Shamrock Rovers at Tallaght Stadium, it would have been easy to name and shame the prejudice. 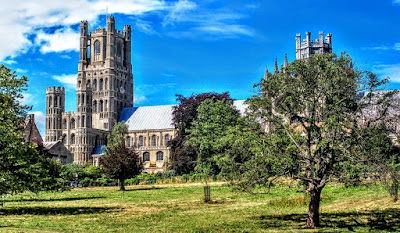 Ely Cathedral is known affectionately as ‘the Ship of the Fens’ (Photograph: Patrick Comerford)

From the Backs to
the ‘Old Dark Blues’

When I first arrived at Sidney Sussex College in my mid-50s in 2008 to study through the Institute for Orthodox Christian Studies, I thought, perhaps, I was too old to inquire about the facilities at the boat clubs. But I have enjoyed walking along the Backs and was honoured some years ago when one of my photographs was used in a brochure to find sponsors for Jesus College Boat Club.

This enthusiasm for rowing was first nurtured in my childhood in West Waterford, when I enjoyed the attractions of Cappoquin Rowing Club, ‘the Old Dark Blues,’ on the bend on the River Blackwater.

Cappoquin Rowing Club was founded in 1862, making it one of Ireland’s oldest clubs and Cappoquin’s oldest sporting and social organisation. Sir John Henry Keane of Cappoquin House was the club’s first president – and there lies another Cambridge link. He had captained the Trinity Boat at Cambridge three decades earlier and had rowed for Cambridge in 1836. Oxford were the favourites that year, but Cambridge won by four lengths.

A later clubhouse in 1910 was financed substantially by the Villiers-Stuart family of Dromana House. The present boathouse is the third on the site, but incorporates parts of the previous buildings, including the overhanging wooden balcony.

Later in the 20th century, Sir Richard Keane brought over Hugo Pitman, one of Oxford’s best-known oarsmen and twice captain of an Oxford boat that beat Cambridge, to help coach the successful McGrath eight. 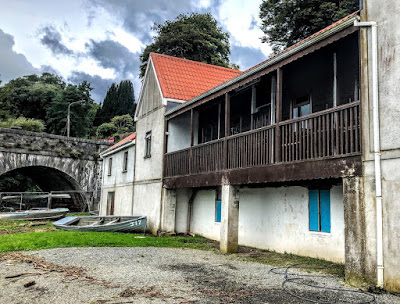 A plaque at the steps above the clubhouse celebrates Charles Orr Stanley (1899-1969), a patron of Cappoquin rowing and a son of one of the founders of the club. Stanley was a successful businessman who lived in Cambridge, where he farmed and was a director of the Pye multinational.

In the 1960s, Pye also took over Banhams on a site next to Elizabeth Way Bridge on the River Cam. Banhams had been boat builders for over 100 years.

At the time, Cambridge had 28 college clubs and 22 clubs had their boats built by Banhams, who also built the boats for the Oxford and Cambridge Boat Race. Stanley brought the finances of the Cambridge University Boat Club from a state of disaster to the one of keen health it has enjoyed ever since.

Those childhood days in Cappoquin have a natural continuity with my walks along the banks of the Cam in recent years, and along the River Liffey between Islandbridge and Chapelizod.

Since moving to Askeaton, I have been happy to be part of the Desmond Rowing Club on the banks of the River Deel. Limerick is richly endowed with boat clubs, and Limerick rowing, like Limerick rugby, is a sport that breaks down all social barriers. 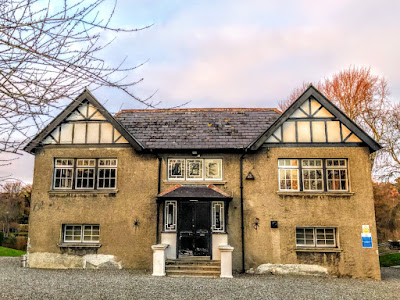 A shared experience
on the River Cam

Irish women rowers have been as successful as their male colleagues. Caoimhe Dempsey from Wicklow was in the Cambridge women’s blue boat this year that won the fourth consecutive victory for Cambridge.

Caoimhe Dempsey is from a sporting background: her mother was a hill runner who represented Ireland, and her grandmother played hockey for Ireland. She tried many sports, including GAA, hurling, hockey and tennis, and came to rowing at Trinity College Dublin where she was part of the senior team.

Dempsey told Cambridge 105 Radio that she was encouraged to come to Cambridge after seeing previous Trinity alumni she had raced with also make it there. Among them were her first novice coach, Susannah Cass, who had previously competed in the Boat Race for Cambridge, and Sally O’Brien, former captain of DULBC.

Eimear Lambe, who was one of the Irish four who won silver in the women’s four A final at Varese this April, is a younger sister of the Irish Olympian Claire Lambe from Cabra, Dublin, who was a member of the Cambridge crew in the Women’s Boat Race in 2017.

Claire Lambe partnered Sinéad Lynch in the Ireland lightweight double that took sixth in the Rio Olympics and was the No 3 seat for Cambridge in the Boat Races in 2017. Claire Lambe rowed with Commercial in Dublin and UCD, and raced in the Corcoran Cup.

Claire Lambe was studying for an MPhil degree in engineering and sustainable development at Cambridge when she became the first Ireland international to win the women’s Boat Race. That year, the Cambridge women’s crew set a new record (18 minutes 34 seconds). 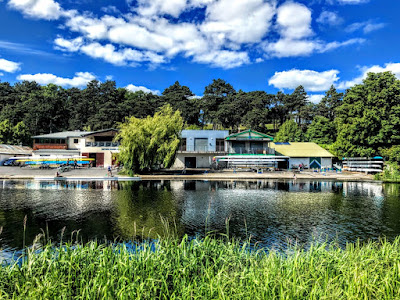 Neptune and Commercial on the banks of the Liffey … Claire Lambe of Cambridge rowed with Commercial (Photograph: Patrick Comerford)

The Cambridge coach Rob Baker was a former Ireland under-23 coach. Since 2018, he has been the chief coach of the Cambridge University Boat Club.

The Cambridge University Boat Club was founded in 1828. It issued a challenge in early 1829 to Oxford University to row a boat race and the first Boat Race took place that year.

Last year, the three historic university boat clubs – the Boat Club, the Women’s Boat Club and the Lightweight Rowing Club – merged in the Cambridge University Boat Club. The clubs had already been working together, sharing facilities and other resources, and in some cases training together. This now one club, bringing all the best of the three previous clubs together, sharing resources, knowledge and experience. This two-page feature was first published in the May 2021 edition of the ‘Church Review’ (Dublin and Glendalough), pp 10-11. 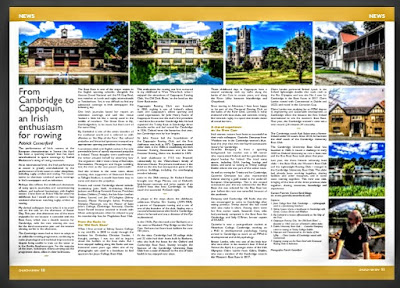