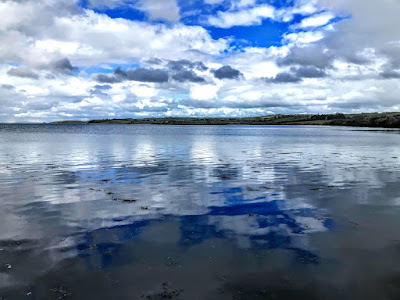 Earlier this week, I visited Kilteery Pier, one of the many small, 19th century piers on the shores of the Shannon Estuary. This pier is between Foynes and Glin, a little outside the village of Loghill. Although it is only 20 km west of Askeaton, and I have seen the signposts for it on many occasions, my visit on Sunday afternoon was my first since I moved to Askeaton over four years ago.

The pier at Kilteery is an L-plan limestone pier, built in 1841-1842. It has coursed rusticated limestone battered walls, and a supporting ramp at the east side. The tarmacked roadway has cut limestone flagstones forming a footpath and fluted cast-iron bollards around the edge. There are tapered limestone capstans, and concrete steps down to the sea at the west of the pier, with cut limestone steps at the east side.

The Shannon Commissioners, who took office in 1839, built a number of piers on the Shannon Estuary in places where local landowners were willing to contribute about half of the total cost.

A local landlord, John FitzGibbon (1792-1851), 2nd Earl of Clare, a former Governor of Bombay and later Lord Lieutenant of Limerick, paid £918 2s 6d to build a pier at Kilteery, said to be ‘favourably situated’ for shipping out agricultural produce.

Lord Clare was the closest friend of Lord Byron while they were at school at Harrow, and Byron had claimed to love him ‘ad infinitum’ and said that he could never hear the word ‘Clare’ without ‘a murmur of the heart.’

Lord Clare had recently been compensated by the Shannon Commissioners to the sum of 5 shillings for the compulsory purchase of the land and beach at Kilteery for building a new pier. Some years earlier, Lord Clare had donated £50 towards the building costs of a new church in Kilcolman, and also leased land in the townland of Knockboheen for building a schoolhouse.

The Shannon Commissioners reported in 1842 that building work on the pier at Kilteery began in May 1841. The stone came Foynes Quarry, providing the foundations and walls of the north and south faces. However, it was difficult to find suitable foundations with the budget, and the mole was shorter than planned.

The project was hampered by severe weather, frequent gales, and an unprecedented rainy season, the work would by this time have been nearly completed. The works have been carried on with energy. The foundations of the remaining portion, which was exposed to the sea, could only be laid at low water in extraordinary spring tides. 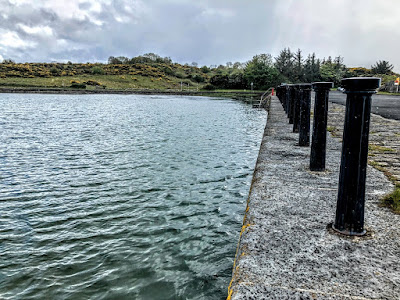 The pier at Kilteery was partly financed by the Earl of Clare (Photograph: Patrick Comerford, 2021)

When the new pier was completed, it was inspected by Lord Clare, James Harvey and Charles Bingham, commander of the Garryowen steamer. It was reported at the time would open trade for ‘a vast tract of country’, including Athea, Abbeyfeale and Newcastle. Lord Clare also contributed to opening a road in this area to Abbeyfeale.

By December 1842, a person was employed to take charge of the pier and to collect fees for boats using the wharf and the quay. The Shannon Commissioners also built a parapet wall to protect people working on the pier and to preserve the roadway against strong westerly gales.

A stone near the pier looks like a benchmark stone, but is engraved with a vertical arrow and the initials ‘SC.’ There are similar stones with these marks at other piers at the Shannon Estuary developed by the Shannon Commissioners. 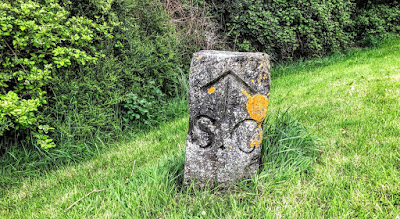 A stone near the pier is engraved with a vertical arrow and the initials ‘SC’ for the Shannon Commissioners (Photograph: Patrick Comerford, 2021)

Like many of these piers along the banks of the Shannon Estuary, the pier at Kilteery was designed so that boats could tie off the end and load or unload cargoes. But it was never designed as a harbour where boats would stay overnight or for even longer periods. The produce loaded there was carried directly to Kilrush or Limerick, both customs ports, and then transferred to seagoing vessels.

Within a few years, it was clear that Kilteery pier had not become an important point for exporting produce from the areas around Athea, Abbeyfeale and Newcastle, as Lord Clare had hoped. Perhaps the Famine added to these problems. But it was also noted in the 1840s that the pier was in the wrong place, ‘a little below Foynes,’ when Foynes and Glin were more appropriate sites for piers.

Lord Clare not only helped financially in building Kilteery pier, but also spent money on a new road when, it is said, the landlords in Glin and Askeaton had rejected the opportunity to have improvements on their land. On the other hand, the landlord of Foynes, Thomas Spring Rice (1790-1866), Lord Monteagle, who had first initiated the Shannon Commissioners, later spent money on providing facilities at Foynes, and this, in time, became the most important port on the Shannon estuary.

A signboard at the end of the pier commemorates the associations of Kilteery with Sean Finn, a West Limerick IRA activist, Mary Spring Rice of nearby Mount Trenchard House, and Mary Childers.

Finn was born Michael John Finn in 1897 in Rathkeale, where he joined the IRA in 1915. Mary Spring-Rice offered Finn the use of her yacht and a hiding place at Mount Trenchard. Finn kidnapped and smuggled the British General Cuthbert Lucas from Fermoy, Co Cork to the Shannon at Kilteery. While the British were searching for Lucas, Finn handed him over to the East Limerick IRA, and in process the general either escaped or was released in Pallaskenry on 30 July 1920.

Finn was shot dead nearby in Ballyhahill 100 years ago on 31 March 2021. Earlier this year, his grandson, Minister Niall Collins, laid a wreath on behalf of the family at Finn’s grave in Rathkeale.

The pier at Kilteery was built with high levels of technical skill and craft work, and it retains many of its original features, including limestone capstans, flagstones and kerbs. The pier has been repaired in recent years, and is a popular bathing spot. While some stones seem to have shifted significantly, the pier remains an interesting focal point on the coastline of the Shannon Estuary. 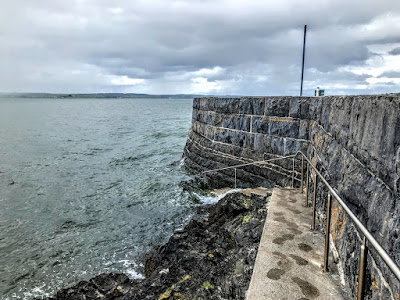 The pier at Kilteery has been repaired in recent years (Photograph: Patrick Comerford, 2021)