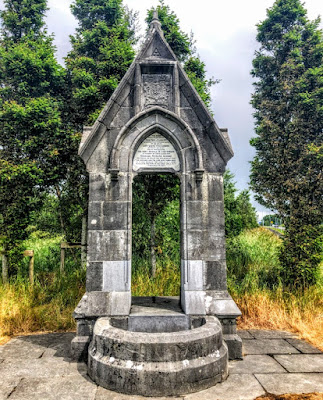 Two of us went to Castleconnell for an hour or two this afternoon, to walk along the banks of the River Shannon, to enjoy the unexpected sunshine, to walk through the woods and to cross the bridge that spans the river between Co Limerick and Co Clare.

On the way, we stopped at Lisnagry, to see the Fitzgibbon Fountain, a Victorian memorial that is reminder of the Fitzgibbon family and their Mountshannon estate.

Mountshannon House was once the largest and most impressive house in the Castleconnell area, standing on a 13,000-acre estate, including 900 acres of parkland, about 3 km from Castleconnell, on the road to Limerick. The Mountshannon estate was bounded on the west by the River Shannon and on the south by the River Mulcair, and extended from Newgarden to Annacotty.

Mountshannon House had a seven-bay, two-storey portico with four large Ionic columns. It is said that the house had 365 windows, one for each day of the year, and that the entrance hall was so wide that a coach and four could easily be driven through it. The gardens and parklands were laid out and landscaped by John Sutherland.

This John Fitzgibbon entered politics in 1780, soon became Attorney General, was appointed Lord Chancellor of Ireland in 1789, and became the first Earl of Clare. He opposed to Catholic Emancipation, was involved in putting down the 1798 Rising, and supported the Act of Union.

He once fought a duel with John Philpot Curran, when Fitzgibbon, but, although he was a crack shot, he fired wide to spare his opponent’s life, and it is said he was instrumental in saving the lives of many United Irishmen after 1798.

Fitzgibbon retired to Mountshannon, and there are many tales of his cruel treatment of the workers and tenants.

Lord Clare was badly injured when he fell from his horse at Mountshannon at Christmas 1801. He died in Dublin on 28 January 1802 and was buried at Saint Peter’s Church. Clare Street in Limerick and Clare Street, Fitzgibbon Street and Mountshannon Road in Dublin recall his name.

Black Jack’s son, also John Fitzgibbon (1792-1851), succeeded as the 2nd Earl of Clare and to Mountshannon estate at the age of 10. The poet Lord Byron had a schoolboy crush on him, and later declared he could never hear the name ‘Clare’ without ‘a murmur of the heart.’ Byron wrote of him:

Friend of my youth! When young we rov’d,
Like striplings, much belov’d,
With Friendship’s purest glow;
The bliss, which wing’d those rosy hours,
Was such as Pleasure seldom showers
On mortals here below.

The Bishop of Limerick once commented that this Lord Clare had not ‘a particle of the fiery enterprising genius of his father.’ 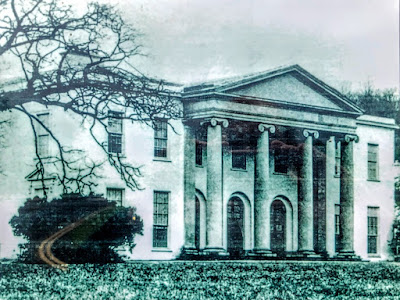 Mountshannon House was remodelled by the English architect Lewis Wyatt … an image beside the Fitzgibbon memorial (Photograph: Patrick Comerford, 2020)

During his life, Mountshannon House was remodelled by the English architect Lewis Wyatt, who added the imposing two-storey portico. The second earl later became Governor of Bombay. When he died, the titles and estate passed to his youngest brother, Richard Hobart Fitzgibbon (1763-1864), 3rd Earl of Clare. He also contributed handsomely on several occasions to the building of the Saint Joseph’s Roman Catholic Church in Castleconnell.

His son, John Charles Henry Fitzgibbon (1829-1854), Viscount Fitzgibbon, died at Ballaclava in 1854 while leading the Royal Irish Hussars in the charge of the Light Brigade. A statue to his memory was erected on the Wellesley Bridge (now Sarsfield Bridge) in Limerick city but was destroyed in an explosion in 1930. The monument was replaced by the 1916 Memorial.

Lady Louisa Isabella Georgina Fitzgibbon (1826-1898), a daughter of the 3rd Lord Clare, inherited Mountshannon when her father died. She was an extravagant and generous woman who gave lavish banquets and balls at the house, but she frittered away the Fitzgibbon fortune and ran up huge debts to maintain her lifestyle.

Her first husband, the Hon Gerald Normanby Dillon (1823-1880), was the sixth son of Henry Augustus Dillon-Lee, 13th Viscount Dillon, and changed his name to Fitzgibbon when they married.

Following his death in 1880, Lady Louisa became engaged to a Sicilian noble, General Carmelo Ascene Spadafora, Marchese della Rochella, son of the Duke of Santa Rosalia, thinking his wealth would rescue her from financial ruin, only to discover that he too was almost penniless and was marrying her for the same reason.

At the party in Mountshannon to announce their engagement, the Italian marquis discovered that Lady Louisa was a near bankrupt. But, in the spirit of noblesse oblige, he went ahead with the marriage in 1882.

It is said the Irish climate ruined his health and he died a few years later, still pining for sunny Sicily. Lady Louisa was forced to sell much of the contents of the house, including the books in the library. Her former friends left her to the mercy of her creditors and she was forced to sell the house and the estate.

Lady Louisa left Mountshannon in 1887 and went to live in the Isle of Wight at Saint Dominic’s Convent, where she spent the rest of her life. When she died some years later, she was buried in the convent grounds.

A public water fountain at Lisnagry was erected by Lady Louisa Fitzgibbon and her first husband, Gerald Dillon, in 1875 in memory of their eldest son, Charles Richard George Dillon (1849-1870), who died of blood poisoning at the age of 20. It originally stood by a water pump, erected by her uncle, the second earl.

The memorial is a gabled, gothic arch of dressed limestone. Above the white marble memorial stone is the quartered Dillon and Fitzgibbon coat of arms and the motto Nil Admirari, ‘To be astonished at nothing.’ The arch was once surrounded by railings, and was a well-known landmark on the Limerick-Nenagh road.

The marble memorial stone is inscribed: ‘The pump placed on this spot by John, Earl of Clare, KP, was renovated in 1875 & this memorial erected by his niece, Lady Louisa Fitz-Gibbon, of Mountshannon, and by her husband, the Honble Gerald N Fitzgibbon, in memory of their eldest son, Charles Richard George, who died on the 30th of July 1870, in his 21st year. ‘The Lord gave and the Lord hath taken away; as it has pleased the Lord so it is done, blessed be the name of the Lord.’ Job 1. 21 v. Requiescat in Pace.’

Lord Clare’s pump continued in use until the 1960s. Limerick County Council dismantled the memorial in 2001 to make way for the Limerick South Ring road. It was restored in 2011 and re-erected in Richhill after the construction of the M7.

As for Mountshannon, it was bought by Thomas Nevins, and then by Dermot O’Hannigan, who was the last owner of Mountshannon. The house was destroyed by fire in 1921 during the War of Independence, the estate was divided up and sold off by the Land Commission and little remains of Mountshannon House apart from the ivy-clad shell. 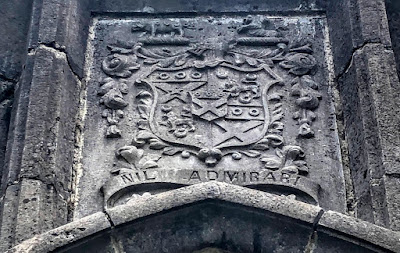 You will have noted, I am sure, the double yellow lines that now bedeck the parking bay at the monument, ostensibly forbidding citizens from parking in safe parking places to view the monument. I have failed to extract from Limerick Council any credible reason for its ridiculous decision.

The first Earl of Clare deserves some of the credit for the political backing that led to the handing over of the road from Dublin to Limerick to two private turnpikes (Dublin to Kilcullen via Naas and Naas to Limerick) that gave Limerick the fastest mail-coach route in Ireland: Mr Bourne's coaches averaged an astonishing 9½ miles per hour in the 1830s.