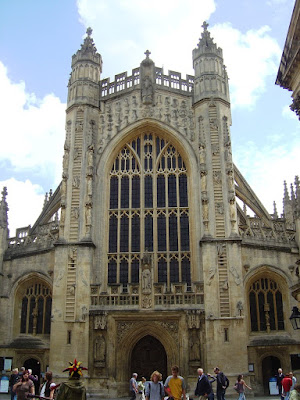 The west end of Bath Abbey illustrates Oliver King’s dream that inspired him to restore the building at the turn of the 15th and 16th centuries (Photograph: Patrick Comerford)

The fifty days of the Season of Easter come to an end yesterday, the Day of Pentecost (23 May 2021). My photographs for the rest of this week are from six churches in the ‘Major Churches Network,’ churches once known as the ‘Greater Churches’ in England.

The Major Churches Network was founded in 1991 as the Greater Churches Network. It is a group of Church of England parish churches defined as having exceptional significance, being physically very large, listed as Grade I, II* or exceptionally II, open to visitors daily, having a role or roles beyond those of a typical parish church, and making a considerable civic, cultural, and economic contribution to their community.

Bath is part of the Diocese of Bath and Wells, but Bath Abbey is not a cathedral – a similar mistake is often made about Westminster Abbey.

Bath Abbey was once known as the ‘Lantern of the West’ because of the impact of light flooding in through its windows. A Benedictine monastery was founded here in 675. King Offa of Mercia rebuilt the monastery in 781, and dedicated it to Saint Peter and Saint Paul. Here Edgar was crowned the first King of England on the Day of Pentecost in 973.

When John of Tours became Bishop of Wells and Abbot of Bath in 1088, he moved his seat from Wells to Bath, and began planning a much larger church as his cathedral. Bath shared cathedral status with Wells for a time, and when later bishops returned to Wells, they continued to be called Bishop of Bath and Wells.

By the 15th century, Bath Abbey was dilapidated. Bishop Oliver King of Bath and Wells decided in 1499 to rebuild the Norman cathedral and church on a smaller scale. The dream that inspired the project is represented on the façade of the west end of the abbey, with angels ascending and descending ladders, and olive trees encircled with crowns and crowned with mitres.

The new church was near completion when Bath Priory was dissolved at the Reformation in 1539. Once again, the abbey church became derelict. But, under Elizabeth I, when the city was experiencing a revival as a spa, the restoration of the abbey as the city’s parish church began.

The tomb of Bishop James Montagu stands within iron railings near the centre of the abbey. He became Bishop of Bath and Wells in 1608, when the abbey was still largely in ruins, and used his personal fortune to complete the restoration work in 1617.

The abbey has 640 monuments – more than any other church in England apart from Westminster Abbey – and 847 ledgers or gravestones. The monument to Colonel Robert Walsh, who died in 1788, includes a broken column, representing the extinction of his branch of an old Irish family.

Another monument recalls the Marchioness of Ely. She was Jane Myhill, from Killarney, Co Kilkenny, and she married Sir Charles Tottenham Loftus (1738-1806) of Loftus Hall, Co Wexford, who became Marquess of Ely for his support of the Act of Union. The monument was erected by their son, Bishop Robert Ponsonby Tottenham, while he was Bishop of Killaloe, later Bishop of Ferns and then Bishop of Clogher. 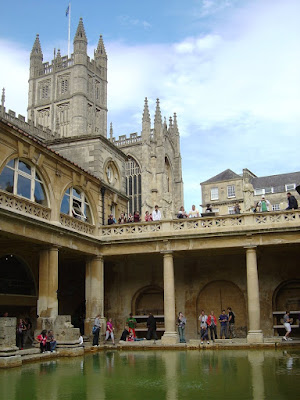 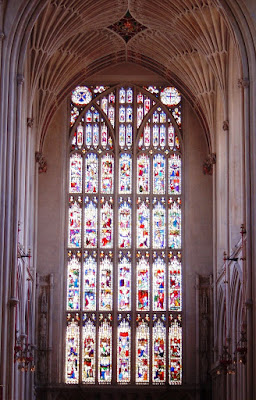 The great east window of Bath Abbey is an example of the best Victorian stained glass … it was damaged in the air raids of 1942, but was restored after World War II (Photograph: Patrick Comerford)

Let us give thanks for the work of the African Union, bringing together a continent of 1,500 different languages. May we learn to embrace difference, and to collaborate well. 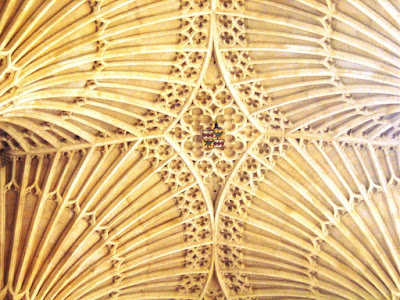 Fan vaulting over the nave of Bath Abbey, made from local Bath stone … a Victorian restoration in the 1860s of the roof from 1608 (Photograph: Patrick Comerford) 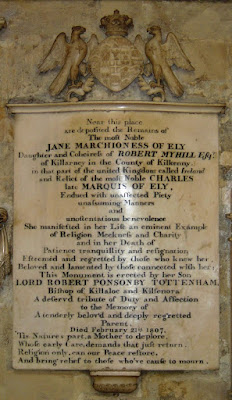