The east windows in the Church of the Blessed Virgin Mary in Patrickswell, Co Limerick (Photograph: Patrick Comerford, 2021)

Between the showers and the rain on Sunday (23 May 2021), I visited the Church of the Blessed Virgin Mary in the village of Patrickswell, Co Limerick. This is a distinctive and dramatic modern church building, between Adare and Limerick City, at the junction of the N20, N21 and M20.

Patrickswell is part of the present parish of Patrickswell and Ballybrown, and the other church in this grouped parish is Saint Joseph’s in Ballybrown, north of Clarina, which I visited a few weeks ago. The parish has a population of about 3,400 people.

The village of Patrickswell is not shown on maps until the early 19th century, although the name Patrickswell appears in a document from 1689 in a list of lands owned by Thomas Rose. Rose owned large tracts of land in the area, and local historian Gerard Beggan believes Rose gave Patrickswell its name.

The Church of the Blessed Virgin Mary in Patrickswell is a distinctive and dramatic modern church (Photograph: Patrick Comerford, 2021)

Local legend says that when Saint Patrick blessed the well in Patrickswell, he stood on high ground and looked towards Carrigogunnell. When night fell and the light appeared from the castle. The legend says Saint Patrick began to read from his book, and when he closed his book and as soon as he did, the light in the castle was quenched forever.

Needless to say, there is no evidence that Saint Patrick ever visited Patrickswell – or any other part of present-day Co Limerick. His name was later given to a well, and the water was said to cure sore and toothaches and was also sprinkled on crops and milk churns.

In the parish, a small mound south-east of Attyflin House was known as Kyle. Tradition says this is the grave of warriors killed in a battle between the Danes and Brian Boru. Westropp says the Kyle was 10 feet high and covered with bushes. Kyle was destroyed in the 1850s, and its exact location is no longer known. 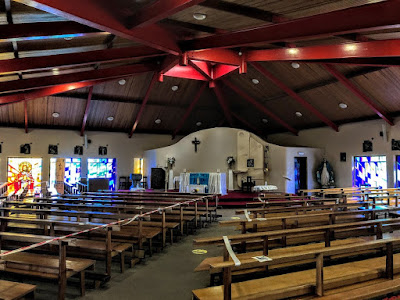 Inside the Church of the Blessed Virgin Mary in Patrickswell (Photograph: Patrick Comerford, 2021)

The name of the townland of Attyflin ‘the site of Flann’s house.’ This area is called after a local character, Flann O’Brien, who had a castle here around 1540. Flann had a colourful lifestyle and was a supporter of the monks of Manister. The monks disapproved of Flann’s behaviour, but they still got their beef from his farm.

One day, Flann was not in good humour and sent a mocking note to the abbot of the monastery telling him that if his faith was worth anything, the promise would weigh as much as the beef. The abbot weighed the beef against the note of paper in front of Flann’s messenger.

The piece of paper was heavier than the beef and the messenger went back to Flan and told him what happened. Flann raced to the monastery to see the weighing scales with his own eyes and once he did, he confessed his sins and became a monk in the monastery. Flann lived to be a great age and died in the monastery as an old man. 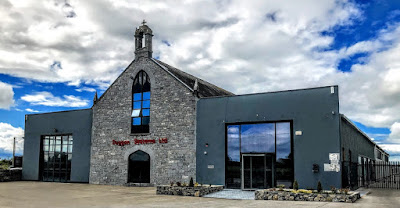 Until the mid-18th century, the parishes of Kilkeedy and Clounanna were joined with Adare. When the parish of Patrickswell was formed, the first parish priest was Father Nicholas Molony, who had returned from exile in France, having fled from Rathkeale some years earlier.

A new church was built in Lurriga in 1847 on land was bought from Captain George Tuite. This church continued in use until 1977, and the building is now the offices and business premises of Duggan Systems Ltd.

The McSweeney family also gave the altar and the ambo as gifts. 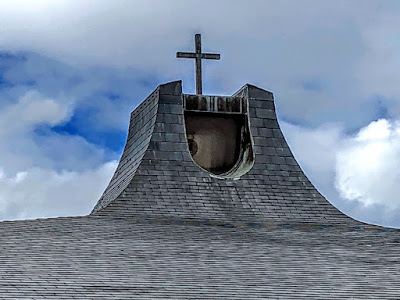 The mansard roof of the church sweeps dramatically upwards to a central pinnacle surmounted by a cross (Photograph: Patrick Comerford, 2021)

This is a square-shaped church, with low pebble-dashed white walls and a mansard roof that sweeps dramatically upwards to a central pinnacle surmounted by a cross.

Inside, the church is lit from the central skylight, and the colourful, modern stained-glass windows. The altar and sanctuary are placed diagonally in the north-east corner, in front of a gently undulating wall.

The large windows filling the north and east walls reach to the ground, each in groups of five divided by buttresses, with the north windows dedicated to the Sacred Heart and the east windows to the Virgin Mary.

The west and south walls have irregularly placed small window openings that give the building a bunker-like appearance. 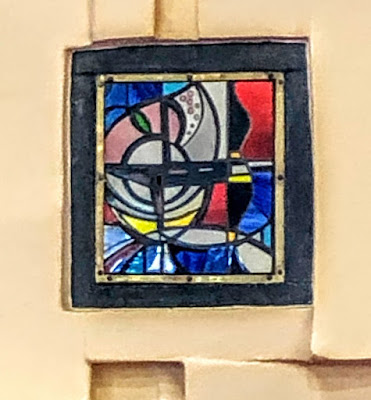 The tabernacle in the church in Patrickswell (Photograph: Patrick Comerford, 2021)

As for Saint Patrick’s Well in Patrickswell, it is said the well dried up after it was desecrated in 1798 by the wives of troops stationed in the village, and the commanding officer broke the stone of the well. Popular devotions at the well ceased around 1890 when a pump was erected over the well. This pump has now been removed.

People in the area used the well until the 1940s when an epidemic of typhoid fever occurred in the area. Local people feared that the well was the source of contamination and they stopped taking water from the well.

And, I wonder, did the legendary Flann O’Brien inspire the pseudonym of Brian O’Nolan (1911-1966). He wrote many satirical columns in The Irish Times and an Irish language novel, An Béal Bocht under the name Myles na gCopaleen. But he used the name Flann O’Brien for his English language novels, including At Swim-Two-Birds, The Third Policeman and The Dalkey Archives. 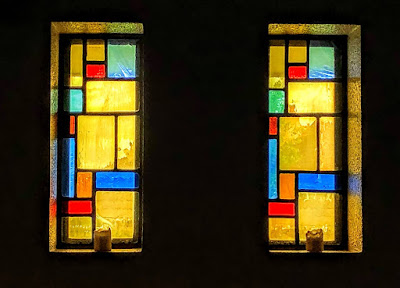