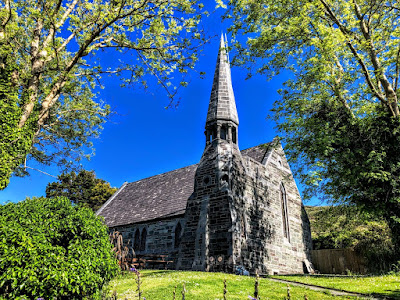 After visiting Kells Bay House and Gardens, and spending some time at Kells Bay Beach last weekend, two of us continued west along the north loop of the Ring of Kerry, and visited the town of Cahersiveen.

Cahersiveen’s place in church history include the story of Monsignor Hugh O’Flaherty (1898-1963), who is known as the ‘Scarlet Pimpernel of the Vatican,’ for his daring exploits and the rescue of over 4,000 people, including Jews and Allied soldiers, in Nazi-occupied Rome, and the monumental Daniel O'Connell Memorial Church, across the street from the house where he lived in his dying days.

This time, I also wanted to see the former Church of Ireland parish church in Cahersiveen, Saint Finnian’s Church, which has housed the Oratory Pizza and Wine Bar since 2016. 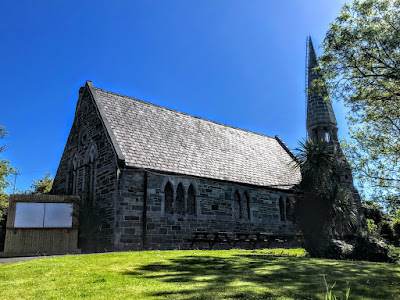 From early days, the parish was a rectory and vicarage held by the Augustinian Canons of the Monastery of Killaha. The first priests in the parish are recorded in the early 15th century, including William MacGildrome, an Augustinian canon, in 1402, John O’Sullebayn, who died in 1422, and his successor, Maurice O’Sullebayn.

In 1455, the rector, Florence O’Sullivan, was accused of simony and fornication.

The Revd Piers Butler, who was the Rector of Cahersiveen in 1686-1712, was the father of Theobald Butler of Priestown, Co Meath, ancestor of the Butlers of Waterville. Theobald Butler went on trial in Tralee in 1742, accused of killing Edward Segerson, who had tried to attack and plunder a shipwreck and murder the ship’s crew. But Butler was cleared of all charges.

Piers Butler’s successor, Canon Philip Chamberlain, was described by Jonathan Swift as ‘a man of very low parts and understanding with a very high conceit of himself, and pretty mad into the bargain.’

The Revd Richard Orpen died in Bordeaux in 1770 while he was the Rector of Cahersiveen. His successor, the Revd Henry Parish, a Cambridge graduate, first came to Ireland as a chaplain to Charlotte Lady Townshend, the heiress of Tamworth Castle and wife of the Lord Lieutenant of Ireland, George Townshend (1724-1807), the 1st Marquess Townshend.

While the Revd Barry Denny was the Rector of Cahersiveen, a new church was built in 1815 with a loan of £540 from the Board of First Fruits, and was later described as ‘a neat plain edifice.’ 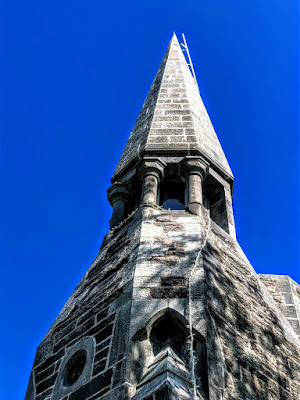 The tower and spire at the north-west corner of Saint Finnian’s Church (Photograph: Patrick Comerford, 2021)

This church was replaced half a century later when Denny’s successor, Canon Richard Moore, was the Rector of Cahersiveen. Saint Finnian’s Church was a new church designed by the church architects Welland and Gillespie, with a tower and spire at the north-west angle and a polygonal robing room at the south-east angle.

The church on West Main Street was built in 1863-1864, and the contractor was James Hunter. The site was adjacent to the main road and opposite the avenue that led to the rectory, and the land was bought from a local merchant Thomas Leslie.

The former church is 170 ft long and 100 ft wide and was built of green sandstone. The cornerstones, the spire and the surrounds of the stain glass windows are all made with limestone. The windowsills and roof are made with Valentia Slate.

Inside, the church could hold up to 200 people. This is a Gothic Revival style church, with a four-bay side elevation, a single-bay two-stage projecting entrance tower at the north-west. The tower is built on a square plan with buttresses, a belfry with a limestone ashlar octagonal spire. There is single-bay vestry at the south-east corner. 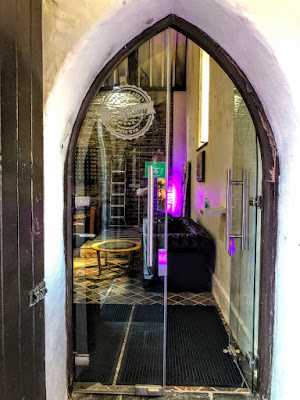 Looking into Saint Finnian’s Church … inside, the church could hold up to 200 people (Photograph: Patrick Comerford, 2021)

The parish of Cahersiveen was amalgamated with Valentia in 1923. The last funeral in church was of a local businessman, Harold Blennerhassett, in February 1968.

The last rector while the church was still open was Canon James Leslie Enright, who was also one of my predecessors as Precentor of Limerick. The church closed ca 1972.

Shortly after it closed, the building was bought by the O’Driscoll family and Aine O’Driscoll ran it as a craft shop and the Oratory art gallery in the 1980s and 1990s. The building was reroofed and renovated internally in late 20th century to accommodate its use as gallery.

Emma Louise Benson and Daragh O’Driscoll opened the Oratory in June 2016, and it has since been voted one of the best restaurants in Kerry. 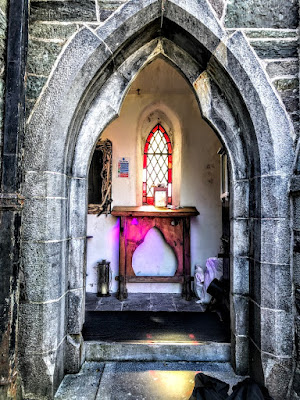