The Mezquita-Catedral or Mosque-Cathedral of Córdoba is one of the most accomplished examples of Moorish architecture in Spain (Photograph: Patrick Comerford; click on image for full-screen resolution)

Earlier in this series, I returned to the Cathedral of Saint James in Santiago de Compostela (31 March 2021, HERE), and the Basilica de la Sagrada Familia in Barcelona (10 April 2021, HERE). This morning (2 June 2021), my photographs are from the Mezquita-Catedral or Mosque-Cathedral of Córdoba is one of the most accomplished examples of Moorish architecture in Spain. 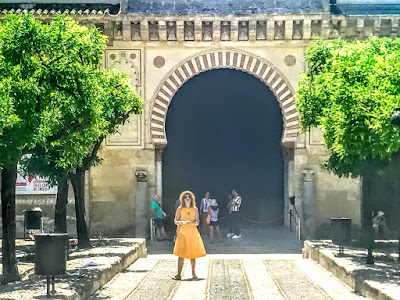 The original main entrance to the Mezquita (Photograph: Patrick Comerford)

According to tradition, when the exiled Umayyad prince Abd al-Rahman I escaped to Iberia and defeated the governor of Al-Andalus, Yusuf al-Fihri, he found the Christians of Córdoba divided into various sects, including Gnostics, Priscillianists, Donatists and Luciferians.

The negotiations to buy the earlier church and its site were handled by the Sultan’s favourite secretary, Umeya ibn Yezid. One of the conditions of sale allowed the Christians of the city to rebuild earlier but ruined churches dedicated to three martyrs, Saint Faustus, Saint Januarius and Saint Marcellus.

Over the next four or five centuries, it was expanded considerably by Spain’s Muslim rulers. Abd al-Rahman and his successors, Hisham, Abd-al Rahman II and Almanzor, spent large amounts on designing, building and decorating the mosque, originally known as Aljama Mosque. 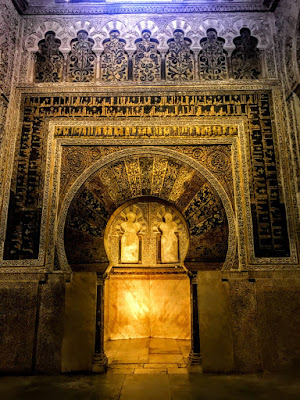 The mihrab of Mezquita faces south instead of towards Mecca (Photograph: Patrick Comerford)

The building incorporates several Roman columns with capitals. Some columns came from the original the Gothic structure, others were brought in from other regions of the Iberian peninsula, often as presents from provincial governors. 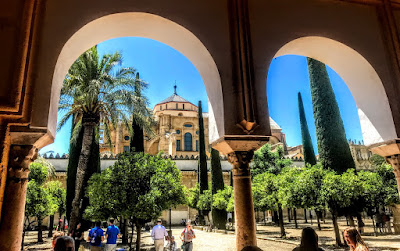 The Patio de los Naranjos or Court of Oranges at the Mezquita (Photograph: Patrick Comerford) 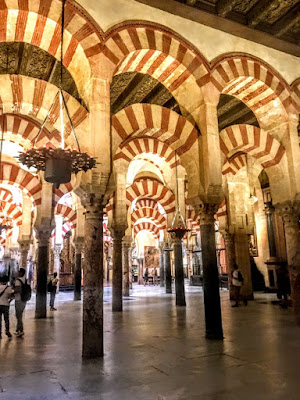 The double arches were an innovation, allowing higher ceilings than were not possible with relatively low columns. The double arches consist of a lower horseshoe arch and an upper semi-circular arch. The alternating red and white voussoirs of the arches were inspired by those in the Dome of the Rock and also resemble those of Aachen Cathedral, which were built almost at the same time. Horseshoe arches were known in the Iberian Peninsula since late Antiquity.

A staircase to the roof was added 150 years after the mosque was first built, and the mosque was extended south. At the time, a bridge was built linking the prayer hall with the caliph’s palace. The mosque was later expanded even further south, as was the courtyard.

After a windstorm in 1589, the former minaret was further reinforced, encasing it within a new structure. The present Torre del Almar or bell tower is 93 metres high, and has steep steps inviting visitors to a view of the city from the top.

The most significant alteration came with building a Renaissance cathedral nave in the middle of the large building in the reign of Charles V of Castile and Aragon. However, when Charles V visited the completed cathedral, he was displeased by the result and famously commented: ‘You have destroyed something unique to build something commonplace.’ 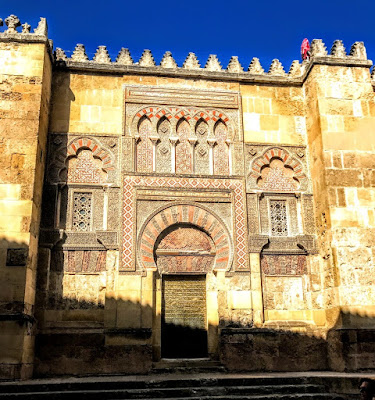 The Gate of the Holy Spirit in the walls of the Mezquita (Photograph: Patrick Comerford)

18 Some Sadducees, who say there is no resurrection, came to him and asked him a question, saying, 19 ‘Teacher, Moses wrote for us that if a man’s brother dies, leaving a wife but no child, the man shall marry the widow and raise up children for his brother. 20 There were seven brothers; the first married and, when he died, left no children; 21 and the second married her and died, leaving no children; and the third likewise; 22 none of the seven left children. Last of all the woman herself died. 23 In the resurrection whose wife will she be? For the seven had married her.’

24 Jesus said to them, ‘Is not this the reason you are wrong, that you know neither the scriptures nor the power of God? 25 For when they rise from the dead, they neither marry nor are given in marriage, but are like angels in heaven. 26 And as for the dead being raised, have you not read in the book of Moses, in the story about the bush, how God said to him, “I am the God of Abraham, the God of Isaac, and the God of Jacob”? 27 He is God not of the dead, but of the living; you are quite wrong.’ 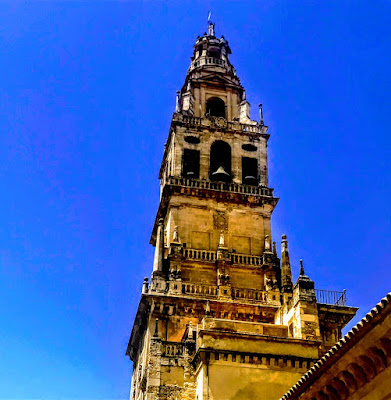 The minaret of the mosque became the bell tower of the cathedral (Photograph: Patrick Comerford)

The Prayer in the USPG Prayer Diary today (2 June 2021) invites us to pray:

Let us pray for our elected representatives. May they make just decisions and treat one another with respect. 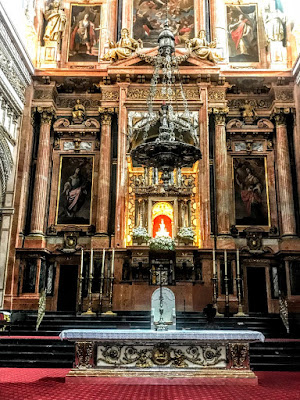