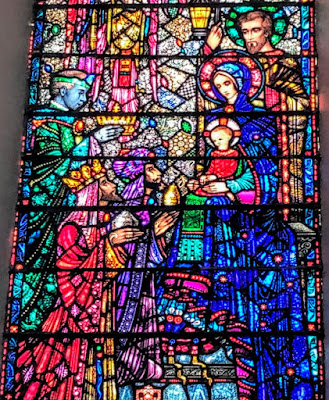 A detail from ‘The Adoration of the Magi’ in Saint Patrick’s Church, Millstreet, Co Cork … but is this a Harry Clarke window? (Photograph: Patrick Comerford, 2021)

The final stop on the road back to Askeaton at the end of last month’s ‘road trip’ or ‘staycation’ in Kerry and West Cork was in Millstreet. I wanted to check out the provenance of a church window attributed to Harry Clarke, and of two windows erected in Saint Patrick’s Church in memory of my great-grandparents.

The large-scale form and the setting of Saint Patrick’s Church make it a notable and imposing feature on the streets of Millstreet. The fine façade marks out this church as the most accomplished historic building in the town.

The dressed sandstone walls and the limestone dressings create a pleasant textual and visual contrast. The quality of craftsmanship can be seen throughout the church, outside and inside, and the bellcote, urns, niches and other elements all show artistic quality. 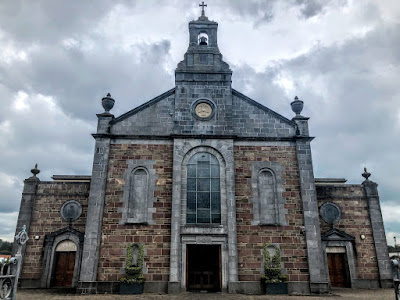 The church, built in 1833-1835, was designed by the Revd Michael Augustine Riordan (1783-1848), a priest-architect from Doneraile who founded the South Presentation Monastery (1828) in Cork. His best-known work is probably Saint Patrick’s Cathedral, Skibbereen, which I also visited during last month’s ‘road trip.’ He also designed churches in Bantry, Blackrock, Dunmanway and Kinsale.

Saint Patrick’s Church is aligned on a south-north axis, rather than the liturgically traditional east-west axis. Outside, the classically-inspired façade is typical of its time and the symmetrical form incorporating varying heights adds further to the striking appearance.

Inside, the Corinthian detailing, the carved reredos and altar, and the stained-glass windows combine to create an ornate interior, making this church an important part of the region's architectural heritage. 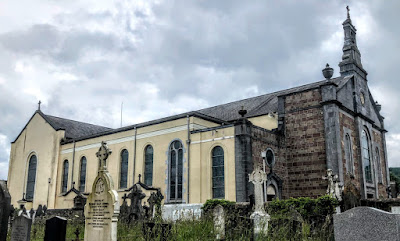 The circular render panel in the middle of the pediment has a carved limestone surround and a decorative Celtic cross motif in relief. There is a pair of carved limestone round-headed niches flanking the upper level of entrance bay.

The main door is square-headed with a moulded limestone surround with moulded cornice and fluted frieze incorporating a panel having cross and floral motifs, and double-leaf timber panelled doors.

The carving above the west porch door (Photograph: Patrick Comerford, 2021)

Above the door, the carved limestone dentillated pediment has cross finial, and a render, relief panel bears a crucifixion scene between an image of the Good Shepherd and a scene of Saint Patrick baptising Saint Aonghus at Cashel.

Above the timber panelled double-leaf doors, the tympanum has a render scene depicting an outdoor Mass, perhaps at a penal rock. 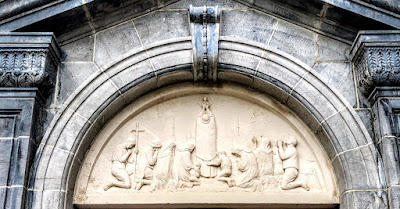 The carving in the tympanum above the east porch door (Photograph: Patrick Comerford, 2021)

There is a gallery and an organ loft above the entrance end of the nave. 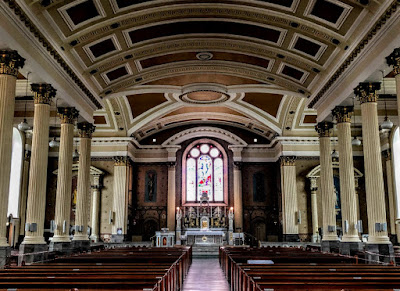 I also wanted to visit Saint Patrick’s Church to look again at a window attributed to Harry Clarke, and that I had written about in the past, to see two windows erected in memory of my maternal great-grandparents Denis and Margaret Crowley.

A stained-glass window that featured on Christmas stamps some years ago depicts the Adoration of the Magi and has been attributed to Harry Clarke. The window is in memory of Denis nd Mary Brosnan and a photograph of angels in the window by Bill Power from Mitchelstown was selected by An Post for stamps in 2014.

However, the window dates from 1940, Harry Clarke had died in 1931, and the window is not included in the recent and definitive work on Harry Clarke windows – Lucy Costigan and Michael Cullen, Dark Beauty: Hidden Detail in Harry Clarke’s Stained Glass (Dublin: The History Press Ireland, 2019).

Drawings in the Library in Trinity College Dublin show the window was designed between 6 August and 31 December 1940, and is the work of the Harry Clarke Studios. It was designed by William J Dowling (1907-1980), who had succeeded Richard King as manager of the studios in 1940, and Terence Clarke (1917-1968).

Terence Clarke was a nephew of Harry Clarke; he entered the family studios as an apprentice in 1930, and died in 1968. Dowling had succeeded Richard King as the manager of the studios in 1940 and remained manager until the studios closed in 1973.

‘The Adoration of the Magi’ … the window was designed by William J Dowling and Terence Clarke (Photograph: Patrick Comerford, 2021)

Two stained-glass windows in the church were presented by the Crowley family. Saint Oliver Plunket is depicted in the first window in the East Aisle (liturgical north) and has inscription: ‘Erected to the memory of Denis and Margaret Crowley of Millstreet by their son Cornelius. 1944.’

Facing it, the first window in the west aisle (liturgical south) depicts the Apparition at Lourdes and has the same wording: ‘Erected to the memory of Denis and Margaret Crowley of Millstreet by their son Cornelius. 1944.’

The Oliver Plunket window by Watson of Youghal, one of two windows donated by the Crowley family (Photograph: Patrick Comerford, 2021)

James Watson bought out Buckley’s Youghal studios in the mid-1890s and his descendants continued to make stained glass windows there until 2012.

James Watson was born in England ca 1860, and family tradition says he came from a long line of English stained-glass makers at York Minster. After working in London for Cox and Son, he moved with his wife Mary and his sons Hubert and Maurice to Youghal in 1888 to work with Buckley.

Watson took over the business from Buckley in 1894 and changed its name to James Watson & Co, also known as The Art Works.

His sons Maurice and Clement worked with their father in the business, which passed to Clement and then to Clement’s six sons. One of these sons, Cecil, became the principal artist; another son, James, set up a stained-glass business in Belfast. The Youghal firm passed eventually to Cecil’s grandson, Peter Watson, who died in August 2004.

Both the Watson studios and An Túr Gloine, set up by Sarah Purser, came to prominence to form the golden age of Irish stained glass, although the Watson windows remained more traditional than those coming from An Túr Gloine or the Harry Clarke studio.

The Lourdes window by Watson of Youghal, one of two windows donated by the Crowley family (Photograph: Patrick Comerford, 2021)

The Watsons worked mainly in Catholic churches and convents in Munster, although they also worked in Church of Ireland Methodist churches too. Their major themes include the Sacred Heart, the Immaculate Conception and the Apparition at Lourdes, the Good Samaritan and both local Irish and universal Catholic saints. Their use of Irish script for Latin text may suggest a symbiosis between faith and motherland.

Another theme in the Watson windows is Christ the Light of the World, with perhaps a dozen large windows based directly on Holman Hunt’s painting. This theme is found in Watson windows in Saint Brendan’s Church, Bantry, Co Cork, and in Christ Church, Sapnish Point, Co Clare,which I visited last weekend, and they place Watson glass in the Pre-Raphaelite tradition.

In the last decade of his ownership of James Watson and Co, James Watson produced a suite of windows for the Church of the Holy Rosary in Murroe, Co Limerick, depicting the Joyful, Sorrowful and Glorious Mysteries of the Rosary. 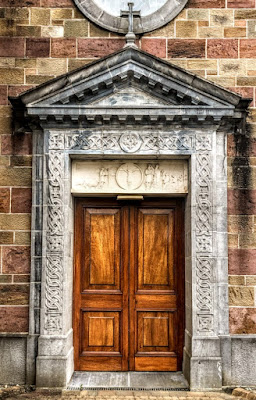 The two Crowley windows were donated by Cornelius D Crowley (1879-1972), of Finnstown House, Lucan, Co Dublin, Roscrea, Co Tipperary, and originally from the Rectory, Millstreet, and then Coole House, Millstreet. He was anxious to be remembered in his native Millstreet, and so he erected these window to his parents, Denis and Margaret Crowley, in Saint Patrick’s Church, in 1944.

Cornelius ‘Con’ was one of my great-uncles, a brother of my grandmother, Maria (Crowley) Murphy (1882-1953) of Millstreet, Co Cork. For many years, Con Crowley was a director of the Roscrea Meat Company with his brother Jeremiah D Crowley of Wallstown Castle, Castltownroche, Co Cork – the other directors included Robert Briscoe TD and G Fasenfeld.

The saints in other windows in Saint Patrick’s Church include Saint Bridget, Saint Charles Borremeo and Saint Dominic.

Out in the churchyard, on the east (liturgical north), I stopped briefly to visit the grave of those great-grandparents. Denis Crowley died on 8 March 1912 at the age of 59 at Drishane Rectory, Liscahane, Millstreet, the home of his son Con Crowley – so, you could say, I am the third generation in four in my family to live in a rectory. Margaret Crowley died at the home of her daughter, my grandmother Maria Murphy, on Main Street, Millstreet, on 9 March 1923 – her death certificate says she was 75, her gravestone says she was 79. 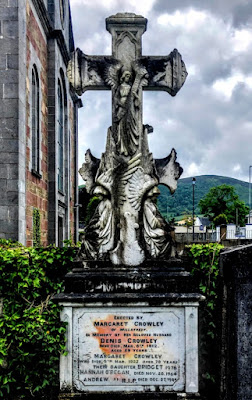 The grave of Denis and Margaret Crowley in the churchyard on east side of the church (Photograph: Patrick Comerford, 2021)