Why Kanturk Castle has
stood unfinished and
empty for 400 years 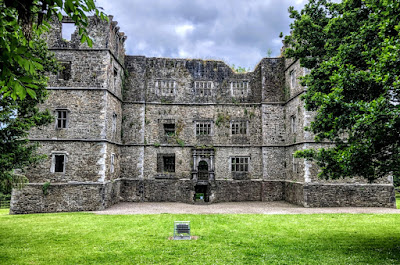 The ‘road trip’ or staycation in West Cork and Kerry was such a success last month, that two of us soon took to the road again, and one of the first places to visit was Kanturk with its ruined and unfinished castle.

Kanturk in north Co Cork stands where the River Allow and the River Dallow meet, before flowing into the River Blackwater. It is about 50 km from Cork, Blarney and Limerick, and lies just north of the N72, 15 km from Mallow and about 40 km from Killarney.

The name Kanturk comes from the Irish Céann Tuirc, meaning ‘boar’s head’. I wonder whether this, in turn, was derived from the white boar, the emblem of the Yorkist King Richard III, who chose it as his heraldic symbol before becoming Duke of Gloucester, ca 1469.

But what inspired Richard III’s choice is hard to say. One theory says that in mediaeval times the word ‘boar’ was spelt ‘bore,’ making it an anagram of ‘Ebor,’ the Roman name of York.

Kanturk Castle, also known locally as ‘Old Court,’ is an impressive, ruined mansion about 1.5km south of the town. It only dates from ca 1609, when it was built for Dermot MacDonagh MacCarthy, Lord of Duhallow, as a defence against English settlers. He had recently been pardoned by the government, after his capture in the aftermath of the Battle of Kinsale in 1601.

This was a Tudor-style mansion four storeys high, 28 metres in length and 11 metres wide. Each tower had five storeys and rose to a height of 29 metres. It was built of limestone rubble from a quarry just north of the castle.

It is said the castle was never completed as the news of it being built reached the Privy Council in England. MacDonagh MacCarthy was ordered to stop building in case his castle became a fortress to use in attacking English forces.

Dressed limestone was used around the mullioned windows, and the cornice and corbel stones. The entrance doors, internal doors, and fireplaces are made from carved limestone. 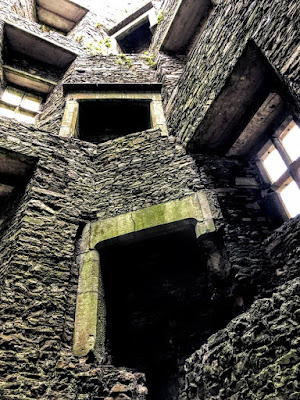 Local lore says the seven stone masons who worked on the castle were all named John, giving the castle the name of Carrig-na-Shane-Saor, meaning ‘he Rock of John the Mason.’

Another legend says there is blood in the mortar. This has been taken to mean that many died in the building of the castle. Some say that passers-by were recruited to work on the castle and once the slave labourers had dropped dead of exhaustion their bodies were disposed of within the castle walls.

Despite the dramatic and terrifying images these tales conjure, it is possible that ‘blood in the mortar’ may refer to a tradition of strengthening lime with the addition of animal blood.

According to legend, MacDonagh MacCarthy was so angry at being ordered to stop building Kanturk Castle that he smashed all the blue ceramic tiles for the roof and threw them into a nearby stream. The stream became known as the Bluepool Stream because of the reflection of the tiles in the water. However, other accounts say MacCarthy ran out of finances. 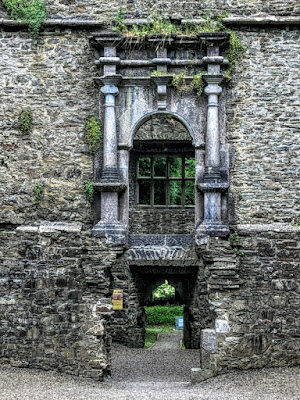 The main entrance is Renaissance in style but the steps to the doorway are missing (Photograph: Patrick Comerford, 2021)

In either case, the castle has remained a roofless shell for centuries. Some of the fireplaces were removed and reused nearby in Lohort Castle. The main entrance is Renaissance in style and located on the west side of the castle, but the steps to the doorway are now missing. There is another entrance on the east side in Irish castellated style.

The flat ‘Burgundian’ arch is a feature of the ground-floor windows, while the windows on the upper storey are Tudor in style, with two or three mullions. The castle also has a remarkable number of well-preserved fireplaces.

After the Caroline restoration in 1660, the MacCarthy family was unable to redeem the old mortgages. Instead, the Lordship of Duhallow and the Manor of Kanturk was awarded to Sir Philip Percival (1656-1680). 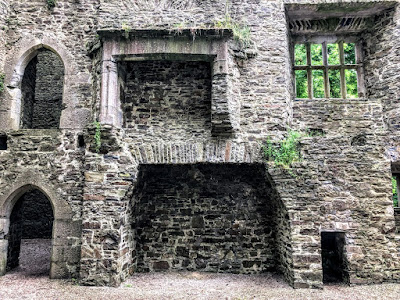 The Percival family removed many of the fixtures from Kanturk Castle, including the fireplaces (Photograph: Patrick Comerford)

The Percival family removed many of the fixtures from Kanturk Castle, including the fireplaces, to use in other properties, including Lohort Castle.

Sir John Perceval (1683-1748), the fifth baronet, became Baron Perceval of Burton, Co Cork, in 1715, Viscount Perceval of Kanturk, in 1722 and Earl of Egmont in 1733. Although Kanturk Castle appears in the background of a portrait of the second earl and his wife painted ca 1759 by Sir Joshua Reynolds, the family lived mainly at Lohort Castle.

Other Perceval estates included Liscarroll Castle, near Buttevant, Co Cork, once reputed to be the third largest castle in Ireland but now in ruins.

Kanturk Castle was donated to the National Trust on 8 May 1900 by Lucy (née King), Countess of Egmont and widow of Charles Perceval (1845-1897), 7th Earl of Egmont. Before he died, her husband had sold off most of the Perceval estates in Co Cork, totalling 62,500 acres, to the tenants under the Ashbourne Land Act in 1895.

Lady Egmont donated Kanturk Castle to the National Trust on condition that the castle was kept in the same condition as it was when handed over – in other words, it was to remain a ruin.

The castle was only the ninth property acquired by the National Trust and was declared inalienable under legislation in 1907. For much of the 20th century, the castle was the National Trust’s only property in the Republic of Ireland. In September 1951, it handed over Kanturk Castle to An Taisce on a 1,000-year lease, with an annual rent of one shilling … if demanded.

After legislation was amended in Westminster, Kanturk Castle was handed over by the National Trust to President McAleese on behalf of An Taisce, 21 years ago today, on 14 July 2000. It is a designated National Monument. 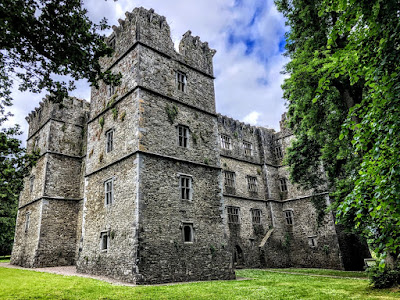 The east side of Kanturk Castle (Photograph: Patrick Comerford)