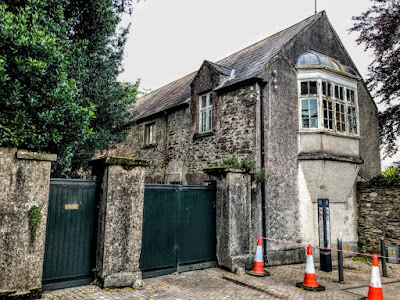 When I was visiting Saint Mary’s Collegiate Church in Youghal, Co Cork, as part of last week’s summer ‘road trip,’ I was disappointed not to be able to have a proper look at Myrtle Grove.

This Tudor house beside the gates of the churchyard is said to have been the home of Sir Walter Raleigh, and was also the home of the writer and journalist Claud Cockburn, who wrote regularly for The Irish Times, as did many of his sons.

Myrtle Grove is said to stand on the site of the house of the Wardens of Youghal. With its tall chimneys, oriel windows and many gables, the house is a rare Irish example of an unfortified, late mediaeval Tudor style stone house. It is said to have been built by Sir Walter Raleigh, and there are many legends associated with his time in the house.

It is said that a panicked servant at Myrtle Grove dowsed Raleigh in water while he was smoking the first tobacco in Ireland.

Raleigh reputedly brought the first potatoes from Virginia to Ireland in 1585, and planted them at his home at Myrtle Grove. For the following two years he was mayor of Youghal, where Queen Elizabeth I granted him 42,000 acres (170 sq km) of land.

At Myrtle Grove, he entertained the poet Edmund Spenser, who is said to have been inspired to write the last verse of the ‘Faerie Queene’ while looking out the window of Myrtle Grove.

However, many of the legends in Youghal about Walter Raleigh date to the romanticising of his links with Youghal by Samuel Hayman in his New Handbook for Youghal (1858). The Hayman family acquired Myrtle Grove in the 18th century, and renovated the house in the 18th and 19th centuries. 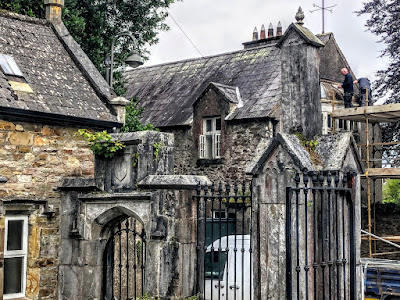 Myrtle Grove, Youghal, seen from Saint Mary’s Churchyard … the house was the home of the Blake, Arbuthnot and Cockburn families in the 20th century (Photograph: Patrick Comerford, 2021)

Two years earlier, in 1916, Blake’s daughter, Olive, and her husband, Major John Bernard Arbuthnot, moved into Myrtle Grove with their family. Their youngest child was the writer and artist Patricia Evangeline Anne Cockburn (1914-1989). When the Arbuthnots moved to London in 1918, Patricia was left at Myrtle Grove with her widowed grandmother.

For many years, Claud Cockburn was a columnist with The Irish Times while I worked there, and some of his sons, including Patrick Cockburn, also contributed to The Irish Times. Patrick’s godmother was Lady Clodagh Anson, who once lived at the Towers in Ballysaggartmore, in Lismore, Co Waterford.

Patricia and Claud Cockburn moved to Ardmore, Co Waterford, in 1980. Claud died on 15 December 1980, Patricia died on 6 October 1989; they are both buried in the churchyard of Saint Mary’s Collegiate Church, Youghal, under a tree planted by her mother in memory of her brother and close to the gates of Myrtle Grove. 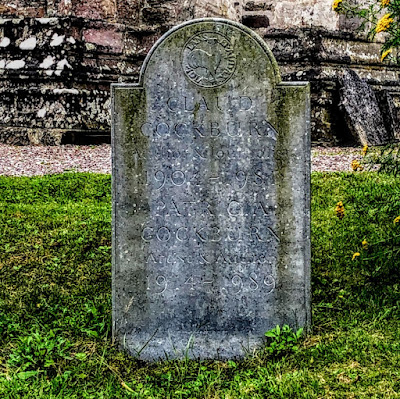 The grave of Patricia and Claud Cockburn in the churchyard of Saint Mary’s Collegiate Church, Youghal (Photograph: Patrick Comerford, 2021)

Myrtle Grove remains in private ownership and is closed to the public, but is being renovated and restored. The house is a rare example of an unfortified 16th century Irish house to have survived with much of its original form intact. It retains its original character and some interior features that may date back to the 1580s.

The Tudor features include the steep gables, oriel windows and tall chimneys. This is a detached triple-gabled six-bay three-storey house, built ca 1550, with a porch-oriel at the front, dormer windows at the rear, and an oriel window on the south elevation.

The oriel window on the south side has six-over-six pane timber sliding sash windows. The round-headed window at the rear has a spoked fanlight, and there is a round-headed door opening in the porch.

The house has rendered chimneystacks, a pitched slate roof, and a weathervane. The rubble sandstone masonry walls are covered with roughcast render. Leading into the house, a pair of square-profile rendered piers have double-leaf timber gates and a pedestrian entrance.

The Church gate lodge beside Myrtle Lodge at the entrance to Saint Mary’s Collegiate Church is also an attractive and eye-catching building, with a gable-fronted porch with an heraldic plaque, pointed arch windows and square-headed windows, a pointed arch opening at the porch, and timber battened door. 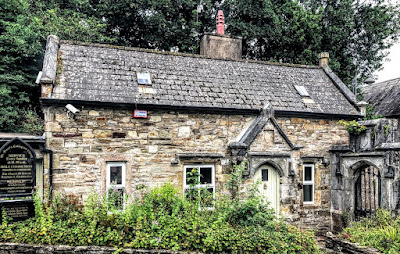 Hello Patrick , Thankyou for your piece on Myrtle Grove . I am distantly related to the Haymans who also lived there and at South Abbey . I was wondering if you have any information about South Abbey as now it seems to be a school but I know Samuel Hayman was born there in 1818 . I am wondering if the house still exists and whether it is near Myrtle Grove . I am in Australia so its a bit hard to find out so your more local " on the ground knowledge" is great valued