Presenting two reports to
the Diocesan Synod of
Limerick and Killaloe 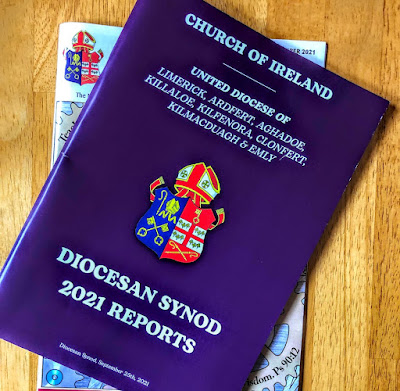 The reports to the Limerick and Killaloe Diocesan Synod include the reports on ministry training and education and the report on the Rathkeale Pre-Social Cohesion Project (Photograph: Patrick Comerford, 2021)

I have spent much of the day taking part in the Diocesan Synod of the United Dioceses of Limerick, Killaloe and Ardfert. As the pandemic restrictions were being rolled back slowly, there were hopes that this meeting might have taken place in person, wither in Villiers School, Limerick, or in Saint Mary’s Cathedral, Limerick. However, uncertainty about regulations denied this hope, and instead, many of us spent the day online, taking part in the synod proceedings through Zoom.

The elected synod members from the Rathkeale and Kilnaughtin Group of Parishes are: Victor Gardiner, Trixie Slagle, Joseph Gleeson and Niall West.

The pandemic restrictions and lockdown have brought an inevitable suspension of the monthly ‘training days’ organised as part of the CME programme in the diocese.

Nevertheless, a full CME programme has continued, and clergy and readers in Limerick and Killaloe and Tuam, Killala and Achonry, receive by email and online a package of resources tailored to the needs of the following Sunday.

These resources include commentaries on and links to the readings, downloadable versions of the propers (Collects, Prefaces, Post-Communion Prayers and Blessings), recommended hymns, and images suitable for on-screen presentations or parish leaflets, notices and noticeboards.

These resources have been expanded to include the Paired Readings as well the Continuous Readings, and to include all the major feast days so that appropriate resources are available for mid-week services.

The statistics for ‘hits’ on these regular postings indicate how the lockdown has had an impact on planning for weekly services. For example, the highest number of monthly ‘hits’ are 2,764 (December 2019), and 2,414 (July 2020), when the lockdown restrictions were first eased last year; but this figure had dropped to 1,190 in February 2021.

The resources are made available early each Monday morning, and a week in advance of major feasts and festivals on https://cmelimerick.blogspot.com/. A mailing list of almost 90 people – mainly in these dioceses, but in other dioceses and places too, from Spain to the US – receives email notifications of new postings. The postings are also shared through other social media platforms and forums, including Facebook, Twitter and Pinterest. If you would like your name to be added to this mailing list, please let me know.

Happily, now that the vaccine rollout is delivering results and larger indoor gatherings become possible, plans are in place to resume the monthly ‘training days,’ with programmes designed for both clergy and ordinands in the diocese.

The past two years have been trying and difficult for the Rathkeale Pre-Social Cohesion Project, with the pandemic restrictions limiting opportunities for promoting community co-operation and bring a disparate community together.

The project is an initiative of the three Churches in the Rathkeale area, the Church of Ireland, the Methodist Church and the Roman Catholic Church, and all three churches are represented on the management committee.

The last public ecumenical event was a carol service at the community Christmas tree in Rathkeale at the end of 2019. But as this report is being prepared, an ecumenical service is being planned for Saturday afternoon, 4 September 2021, in the abbey ruins in Rathkeale.

The past 24 months have seen a number of changes in personnel. Salters Sterling (Birr Parish) has been succeeded in the chair by Gordon Milne, a former partner in PwC, on the nomination of the two bishops of Limerick. Father Robbie Coffey now represents the Roman Catholic Church on the management committee. Denis Robinson, after a time at Limerick Institute of Technology, has returned as the Project’s Community Development Officer.

Throughout the pandemic, the committee continued to meet virtually. But trust in the community was often made difficult by social media accounts of parties, Garda raids on supposed ‘shebeens’ and traffic and travel at a level that seemed to breach public guidelines.

At a positive level, the project received the ‘Pride of Place Award’ in the category of towns with populations between 1,000 and 2,000. The prize fund has been used to make grants to all schools in Rathkeale to promote social cohesion and access to education among school-goers.

Trust between the communities is being restored once again, and the return of Denis Robinson has already had a positive impact on life in Rathkeale.

During the synod, we wecolmed the new Diocesan Secretary, Lorna Sharpe, and we were remined of the deaths of Yvonne Blennerhassett, Archdeacon Wayne Carney, Canon Marie Rowley-Brookes, Canon Trevor Sullivan, Canon Alan Shaw and the Revd Martha Grey-Stack.

I also contributed to the debate on the report of the Diocesan Council of Mission, and we discussed the legislation coming before General Synod next week on the amalgamation of the Diocese of Limerick and Killaloe and the Diocese of Tuak, Killala and Achonry.

Meanwhile, in the elections preceeding the synod meeting, the Dean of Limerick, the Very Revd Niall Sloane, were elected to the Standing Committee of the General Synod of the Church of Ireland.

I remain a member of the General Synod, the Diocesan Council, the Episcopal Electoral College, the Diocesan Board of Education, and the Committee on Elections.