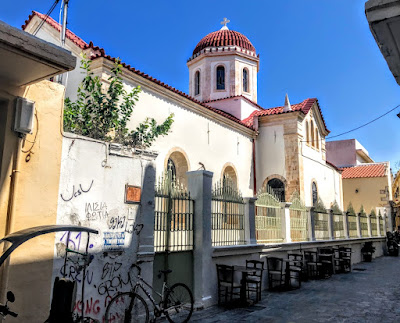 The Church of Aghia Barbara on Aghia Barbara street is just a hundred metres from Rethymnon Cathedral (Photograph: Patrick Comerford, 2021)

Today is the Seventeenth Sunday after Trinity (Trinity XVII), and later this morning (26 September 2021) I am taking part in and preaching at Morning Prayer in Castletown Church, Co Limerick, and the Parish Eucharist in Holy Trinity Church, Rathkeale.

In this series, I have already visited Rethymnon Cathedral (29 March and 4 May), the Church of the Four Martyrs (3 May), the churches of Tsesmes and Platanias (2 May), Saint George, Panormos (5 May), and many monasteries in the Rethymnon area, including Arkadi (1 May), Aghia Irini (27 June), Preveli (28 June), Arsanios (29 June), Saint Anastasia near Tsesmes (30 June), and the former Saint Barbara’s Monastery or Kara Musa Pasha Mosque (1 July).

My photographs this morning (26 September 2021) are from Saint Barbara’s Church on Saint Barbara Street in the old town of Rethymnon. 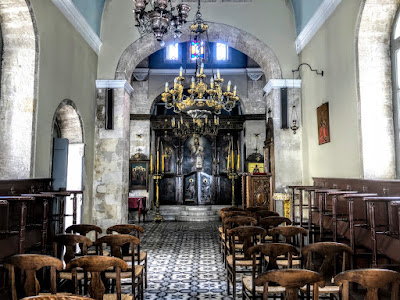 Inside Aghia Barbara … the church features in ‘A Tale of the Town’ by Pandelis Prevelakis (Photograph: Patrick Comerford, 2021)

The church was built in 1885 to replace an earlier Latin church of the same name, dating from at least 1613. That church, in turn, probably took its name from Saint Barbara’s Monastery, which once stood at the end of Arkadiou Street, on the site of the later Kara Musa Pasha Mosque.

Aghia Barbara is a cruciform church with a dome. The story of the painting of the church walls appears as an incident in A Tale of the Town by Pandelis Prevelakis. From 1898 until 1907, the church was used as the garrison church for the Russian troops in the town.

Behind the church, the former Girls’ School stands on the same grounds and has long been the town library. The blue flowers on top of the white wall that is shared by the church and library drop down on the other side into the gardens of Pepi Studios, where I have stayed in previous years. 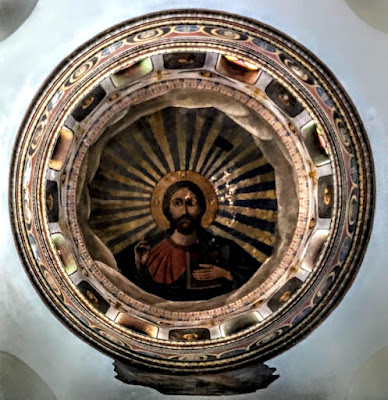 Inside the dome of Aghia Barbara (Photograph: Patrick Comerford, 2021) 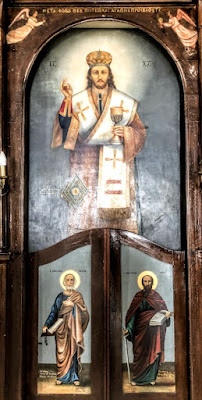 The central panels of the iconostasis or icon screen in the church (Photograph: Patrick Comerford)

The Prayer in the USPG Prayer Diary today (26 September 2021) invites us to pray:

Holy Father,
We thank you for the gift of prayer.
May we pray when we are suffering,
And when we are cheerful.
Let us pray for ourselves,
For others and the world. 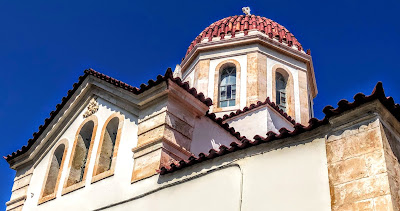 Aghia Barbara was the garrison church for Russian troops in Rethymnon from 1898 until 1907 (Photograph: Patrick Comerford, 2021)