George Selwyn: his life as
a missionary and bishop is
recalled in Lichfield Cathedral 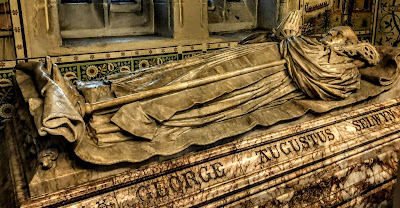 Each day, at the mid-day Eucharist and Evening Prayer in the Lady Chapel in Lichfield Cathedral, I have found myself sitting beside the monument to Bishop George Augustus Selwyn (1809-1878).

George Augustus Selwyn was born on 5 April 1809 at Church Row, Hampstead, the second son of William Selwyn (1775–1855) and of Laetitia Frances Kynaston. At the age of seven, he went to Great Ealing School, where the future Cardinal John Henry Newman and his brother Francis were at school at the same time. He then went to Eton, where he was a contemporary of William Ewart Gladstone.

Selwyn was ordained deacon (1833) and priest (1834), and he became an assistant master at Eton, and a curate in Windsor. In 1839, he married Sarah Harriet Richardson, and they were of Canon William Selwyn of Hereford Cathedral and Bishop John Richardson Selwyn of Melanesia, who later became the second Master of Selwyn College, Cambridge. 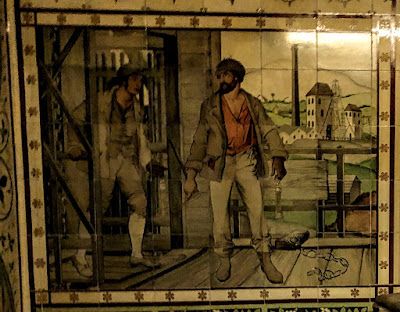 The mosaics in the Selwyn memorial in the Lady Chapel, Lichfield Cathedral, illustrate his life (Photograph: Patrick Comerford, 2021)

When a meeting of bishops at Lambeth in 1841 recommended the appointment of a bishop for New Zealand, Charles James Blomfield, Bishop of London, offered the post to Selwyn. He was consecrated at Lambeth on 17 October 1841, and immediately after Christmas set sail from Plymouth for his new missionary diocese with William Charles Cotton as his chaplain. On the outward voyage, he studied the Māori language and was able to preach in Māori immediately on arrival in Auckland on 30 May 1842.

Selwyn clashed with Archdeacon Henry Williams, the leader of the CMS party in New Zealand, when he supported Governor George Grey’s accusations of improper land purchases by Williams. Grey twice failed to recover the land in the Supreme Court, and when Williams refused to give up the land unless the charges were retracted, he was dismissed from the CMS in November 1849.

Williams was reinstated by CMS in 1854, but there was often a wide gap between the CMS missionaries with their evangelical views and the bishops and other high church clergy, with many clashes on liturgical uses and practices. Yet Selwyn often appointed CMS missionaries to senior positions in New Zealand, including appointing William Williams as the first Bishop of Waiapu.

Selwyn was criticised by CMS missionaries in New Zealand such as Thomas Grace, and by CMS in London, including Henry Venn, for being ineffective in training and ordaining New Zealand teachers, deacons and priests. CMS had funded half of his role on the condition that he ordain as many people as possible, but Selwyn slowed this down by insisting those in training learn Greek and Latin first. 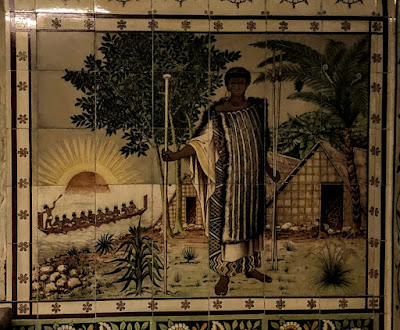 The mosaics in the Selwyn memorial in the Lady Chapel, Lichfield Cathedral, depict events in his life (Photograph: Patrick Comerford, 2021)

The first Māori deacon, Rota Waitoa, was ordained by Selwyn at Saint Paul’s Church, Auckland, but it was two decades before he ordained a Māori priest. Selwyn was blamed for undermining the work of CMS and damaging the enthusiasm Māori had for Christianity.

But Selwyn was an advocate of Māori rights and a critic of unjust and reckless land acquisition practices that led to the New Zealand Wars. However, his support of the Invasion of the Waikato, where, as chaplain, he was frequently seen riding on horseback on the frontlines with the British and colonial forces, and his involvement in the burning of women and children at Rangiaowhia in 1864, damaged his and the church’s relationship with Māori, which is still felt today.

Selwyn was rigorous in travelling throughout New Zealand and the Pacific Islands, including Melanesia, and in 1861 John Coleridge Patteson became the first Bishop of Melanesia.

Selwyn’s pioneering organisation of his diocese set many important precedents. He worked to provide self-governance for the Anglican Church in New Zealand, and he visited England in 1854 to secure the creation of new dioceses and approval for a general synod of bishops, priests, and laity. On his return to New Zealand, four new bishops were consecrated, two for the North Island and two to the South Island.

With Selwyn as the new metropolitan bishop in New Zealand, the first general synod met in 1859, and he drafted the constitution of the Anglican Church of New Zealand, with his role as metropolitan titled ‘the Primate.’

Selwyn returned England to take part in the first Lambeth Conference in 1867. While he was at the conference, he was offered the See of Lichfield, and, with much reluctance, accepted the offer.

In 1878, Swelwyn ordained a group of deacons in Lichfield who included John Roberts, honoured as a saint in the Episcopal Church for his missionary work in the Bahamas and Wyoming.

Selwyn died on 11 April 1878 at the age of 69 at the Bishop's Palace, Lichfield, and was buried in Lichfield Cathedral. He is remembered in the Church of England on 11 April.

Selwyn College, Cambridge, was founded to honour his contributions to the life of the church, to missions and to theology. The college coat of arms incorporates the arms of the Diocese of Lichfield impaled with the arms of the Selwyn family. 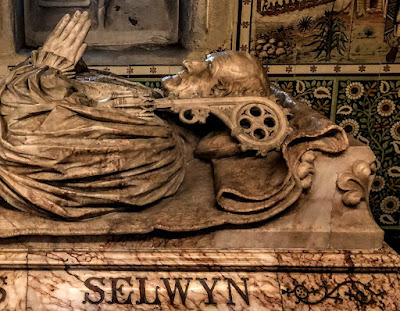 When Bishop George Augustus Selwyn died on 11 April 1878 at the Bishop's Palace, he was buried in Lichfield Cathedral (Photograph: Patrick Comerford, 2021)

The Selwyn family owned a large tract of land in Kew, Surrey, and the road from Kew Gardens station to Kew Gardens is named Lichfield Road after Bishop Selwyn.

Selwyn House in the Cathedral Close in Lichfield was built on the side of the mediaeval moat and it closes the view at the east end of the close. Selwyn House is often known as ‘Spite House’ because of a popular Lichfield legend that the first house on the site was built by one of three sisters in the Aston family in the 1750s to block her sisters’ view of the cathedral.

As Annette Rubery says in her book Lichfield Then & Now in colour, ‘Even though the facts have since been since been disproved, the tale still lives on.’

The house was enlarged in the early 19th century, when an iron balcony was added on the north side. At the beginning of the 20th century, it was home to Harriet Selwyn, the widow of Bishop Selwyn. 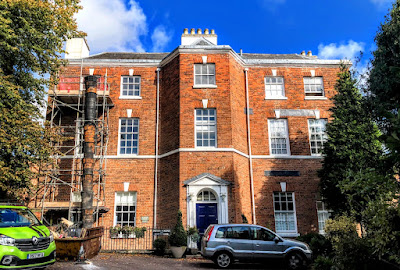 Selwyn House at the east end of the Cathedral Close in Lichfield (Photograph: Patrick Comerford, 2021)