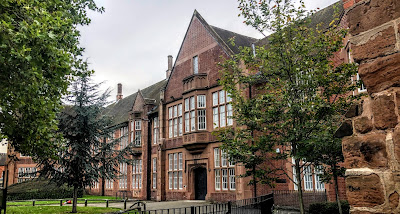 The name of the former Friary Girls’ School, Lichfield, built 100 years ago in 1921, recalled the former Franciscan Friary on the site (Photograph: Patrick Comerford, 2021)

I am back in Lichfield for three days, staying at the Hedgehog Vintage Inn on Stafford Road, enjoying walks in the countryside, following the daily cycle of prayer in Lichfield Cathedral, meeting some old friends, and finding some ‘down time.’

My theme for these few weeks is churches in the Franciscan (and Capuchin) tradition. My photographs this morning (12 October 2021) are from the former Franciscan Friary in Lichfield. 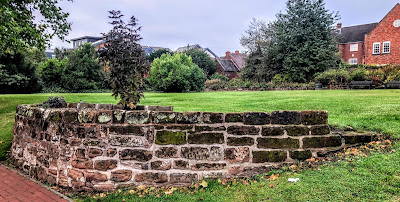 The Friary was founded around 1229, when the first Franciscans or Greyfriars arrived in Lichfield (Photograph: Patrick Comerford, 2021)

A short distance from the cathedral, the Franciscan Friary once stood in a large estate on the west side of Lichfield.

The friary was founded around 1229, when a group of Franciscans or Greyfriars arrived in Lichfield. Henry III gave them oak trees from local forests for building and grants of money, and they were given houses and land by Alexander de Stavenby, Bishop of Lichfield (1228-1238). In 1241, the Sheriff of Lichfield was authorised ‘to clothe the Friars of Lichfield.’ In 1286, Edward I provided eight oak trees from Cannock Chase for further building.

When a large fire in Lichfield destroyed the Friary in 1291, the people responded generously and the friary was rebuilt.

The friars had generous benefactors in Lichfield. Henry Champanar granted them a free water supply from his springs at Aldershawe. The Crucifix Conduit was built at the gates of the Friary at the corner of Bore Street and Bird Street in 1301, and remained there until the 20th century. When John Comberford died in 1414, he left 10 shillings for masses to the Franciscan mendicant friary in Lichfield.

The friars lived a simple life of poverty, chastity and obedience and spent most of their time preaching and caring for the poor and sick of Lichfield. But with the wealth accrued from generous benefactors, the simple timber structures were replaced by large sandstone buildings on a site covering 12 acres. The large church had a nave measuring 110 ft x 60 ft, and a chancel 95 ft x 28 ft; the cloister was 80 ft square. The buildings also included a dormitory lodge, a refectory and domestic dwellings.

At the Dissolution of the monastic houses, 301 years after the Franciscans had arrived in Lichfield, the Friary was dissolved in 1538. The majority of the buildings, including the church, cloisters, refectory and domestic buildings were demolished, and most of the site was cleared. The only buildings to survive were the dormitory on the west range and a house known as ‘Bishop’s Lodging’ in the south-west corner.

The estate and remaining buildings were sold for £68 in 1544 to Gregory Stonyng, the Master of Saint Mary’s Guild, which provided the effective civic government of Lichfield. He remodelled the buildings for his own domestic use.

The 11 acres of the Friary estate that remained were bought in 1921 by Sir Richard Ashmole Cooper, MP for Walsall. Cooper gave the Friary to the city to develop housing and to lay out new roads and suburbs.

When the new Friary Girls’ School was built in 1921, the Bishop’s Lodging was incorporated into the south-west of the building. A new road named ‘The Friary’ was built across the former site in 1928. In building the road, a clock tower was relocated, and much of the west range of the remaining friary buildings was demolished.

The site of the former friary church was threatened with development in 1933. But an archaeological dig showed the extent and layout of the ruins, and the site eventually became a Scheduled Ancient Monument, preventing any further development.

A classical style portico from Sir Richard Cooper’s home at Shenstone Court was set up in 1937 to frame the entrance to the excavated ruins. The site is now a public garden and the slabs showing the layout of the walls of the cloister can be seen on the ground as well as parts of the north wall of the nave.

Across the street, The Bishop’s Lodging was the only part of the original Friary that survived.

The Friary School moved to the north side of Lichfield in 1975, close to the Hedgehog Vintage Inn where I am staying, and the building became Lichfield Library.

The Library again in recent years to Saint Mary’s Church, and the Friary School building and the Bishop’s Lodging were converted into modern apartments, although not without controversy. But the memory of the Friary is still present in Lichfield today in names that include The Friary, Friary School, Friary Tennis Club, Friary Gardens and Monks Walk. 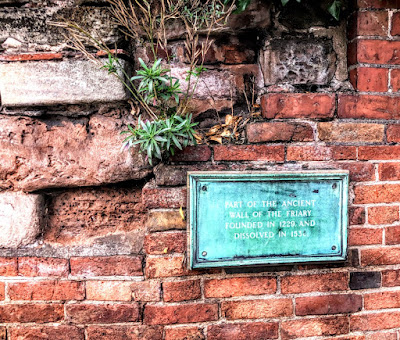 Part of the surviving walls of the former Franciscan Friary in Lichfield (Photograph: Patrick Comerford, 2021)

37 While [Jesus] was speaking, a Pharisee invited him to dine with him; so he went in and took his place at the table. 38 The Pharisee was amazed to see that he did not first wash before dinner. 39 Then the Lord said to him, ‘Now you Pharisees clean the outside of the cup and of the dish, but inside you are full of greed and wickedness. 40 You fools! Did not the one who made the outside make the inside also? 41 So give for alms those things that are within; and see, everything will be clean for you.’ 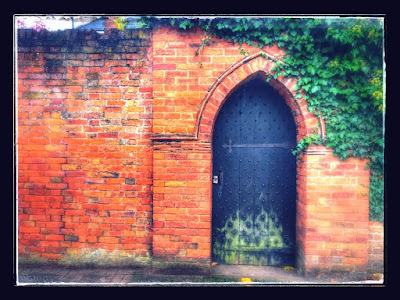 The Prayer in the USPG Prayer Diary today (12 October 2021) invites us to pray:

Let us pray for all those with mental health issues. May they receive the care they need and feel able to discuss mental health with their loved ones. 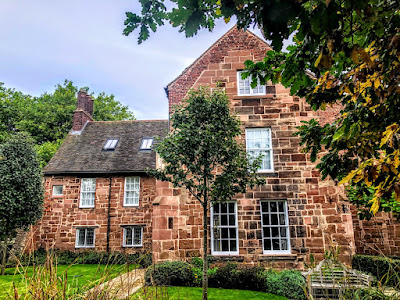 The ‘Bishop’s Lodging’ was one of the few friary buildings to survive the Dissolution (Photograph: Patrick Comerford, 2021)

The memory of the Friary is still present in street names in Lichfield (Photograph: Patrick Comerford)