‘Hello Canada, hello Canada’:
words that put Ballybunion
at the centre of the world 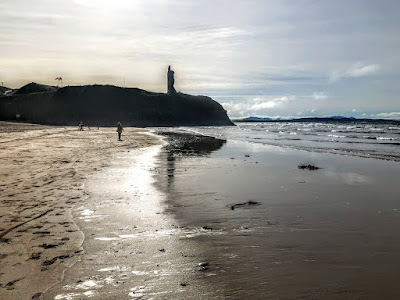 Ballybunion in this afternoon’s autumn sunshine … three flags are flying above the headland and behind the castle (Photograph: Patrick Comerford, 2021)

After a busy Sunday morning in Askeaton and Tarbert, two of us headed on to Ballybunion for a walk on the two beaches in unseasonable afternoon autumn sunshine.

I often wondered why the flags of Italy, Ireland and Canada flew above the beaches, behind the castle ruins on the promontory that separates the Ladies’ Beach and the Men’s Beach in Ballybunion.

But, between my two beach walks this afternoon I learned how this seaside town in North Kerry was once one of the most important places on the planet when it comes to the history of telecommunications.

On 19 March 1919, the first East-to-West transatlantic voice transmission was made from the Marconi radio station in Ballybunion to a receiving station in Cape Breton, Nova Scotia, using the call signal YXQ.

The memorial marking the centenary of this event was unveiled on 19 March 2019 by Marconi’s daughter, Princess Elettra Marconi Giovanelli, and her son, Prince Guglielmo Giovanelli Marconi.

‘Hello Canada, hello Canada,’ were the words Princess Elettra uttered to Nova Scotia during the centenary celebrations. These were the first words ever communicated live by voice across the Atlantic, when uttered by WT Ditchem on 19 March 1919 in his transmission from the Marconi Radio Station in Ballybunion to Nova Scotia.

The 89-year-old Princess travelled from Italy with her son Prince Guglielmo, and his wife, Princess Victoria, to take part in the celebrations in Ballybunion, including the repeat broadcast. It was successfully picked up at a station close to the original receiver in Nova Scotia in a communication that revived a moment in the history of communications and that brought joy to amateur and professional radio operators.

A plaque was then unveiled to mark the extraordinary role of Ballybunion in this event, and so the flags of the Italy, Ireland and Canada were fluttering in the sunshine in Ballybunion this afternoon

Princess Elettra Marconi Giovanelli is the daughter of Marchese Guglielmo Marconi, the ‘Father of Radio,’ who received the Nobel Prize in Physics in 1909 for his pioneering work in wireless communication. She is the co-author and editor of Marconi, My Beloved, which includes eyewitness accounts of her father’s work – including his development of Vatican Radio and his scientific experiments on board the floating laboratory, the steam yacht Elettra.

Princess Elettra has devoted her life to talking about Marconi, educating people about his scientific achievements and about the man he was, conveying the enthusiasm and perseverance he showed through his breakthrough experiments.

She was born in Civitavecchia in Italy, and was named Maria Elettra after her father’s famous floating laboratory, the steam yacht Elettra. She inherited the Palazzo Marconi in Bologna in 1936 when she was six, after the death of her uncle Alfonso and a year before her father’s death on her seventh birthday.

The young Maria Elettra grew up heavy influenced by his work through the stories recounted by her mother. She married Prince Giovanelli in 1966, and the couple had a son the following year.

After Guglielmo Marconi’s death, Elettra’s mother dedicated her life to commemorating and celebrating his achievements, and that responsibility has since passed to Princess Elettra. Her aim has been to inspire a new generation of young scientists to make the kind of discoveries that can change our world.

She has also made it a life mission to restore the Palazzo Marconi in Bologna and to convert it to an academic centre for students studying science, technology, engineering or medicine as a tribute to her father. 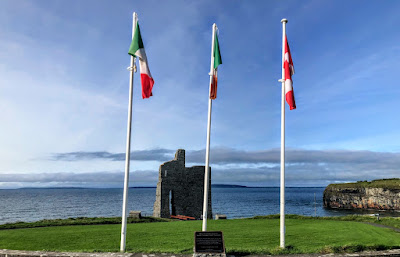 Three flags in Ballybunion recall a momentous event in communications over 100 years ago (Photograph: Patrick Comerford, 2021)