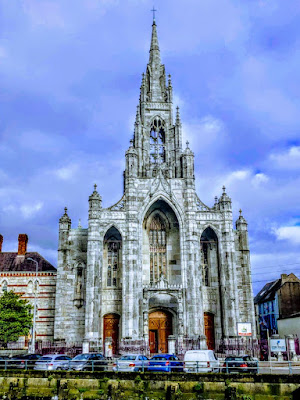 Today is the Twentieth Sunday after Trinity (Trinity XX). Later this morning (17 October 2021), I am leading and preaching at Morning Prayer in Saint Mary’s Church, Askeaton, and presiding at the Parish Eucharist in Saint Brendan’s Church, Tarbert. But, before the day begins, I am taking a little time this morning for prayer, reflection and reading.

My theme for these few weeks is churches in the Franciscan (and Capuchin) tradition. My photographs this morning (17 October 2021) are from the Father Mathew Memorial Church, Cork. 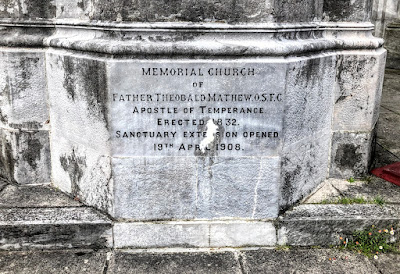 Building work on the church began in 1832, but it was not completed until 1890 (Photograph: Patrick Comerford)

Holy Trinity Church, also known as the Father Mathew Memorial Church, is a Gothic Revival church and friary on Father Mathew Quay, on the bank of the River Lee in Cork.

The church belongs to the Order of Friars Minor Capuchin and is the only church dedicated to Father Theobald Mathew (1790-1856), the Temperance campaigner.

The Capuchins arrived in Cork in 1637, 12 years after the first Capuchin community in Ireland was established in Dublin.

The church was built by the Capuchins, under the guidance of Father Theobald Mathew, on what was once known as Charlotte Quay. It replaced an earlier, smaller church that stand in a lane nearby, behind Sullivan’s Quay.

The name of Charlotte Quay was later changed in honour of Father Mathew.

The church was designed by the architect George Richard Pain (1793-1838). It is aligned on a north/south axis, rather than the traditional, liturgical east/west axis.

The foundation stone was laid on 10 October 1832, Father Mathew’s birthday. Pain died in 1838, and supervision was taken over by Thomas Coakley. The Great Famine interrupted the building project, and Thomas Deane was chosen to complete the church without its portico and spire, while William Atkins was responsible for the interior. The church finally opened on 10 October 1850. However, the church was not completed until 1890, in time for the centenary of Father Mathew’s birth. The friary to the west of the church was completed in 1884.

Inside the church are some magnificent examples of stained-glass windows. The sanctuary window is dedicated to Daniel O’Connell, and a number of windows on the south aisle are the work of Harry Clarke and the Harry Clarke studios.

One window was commissioned by the Cork and District Trades and Labour Council and dedicated to the Cork Capuchin Brother Thomas Dowling, who had mediated during a strike. It was produced by Joshua Clarke to a design by his son Harry Clarke and under his supervision. It depicts Christ as Prince of Peace and Saint Francis holding a dove, with the city’s skyline at the bottom of the window.

Two other windows were commissioned from Harry Clarke and his brother, Walter Clarke, depicting the Sacred Heart and the Immaculate Conception being venerated by Munster saints. 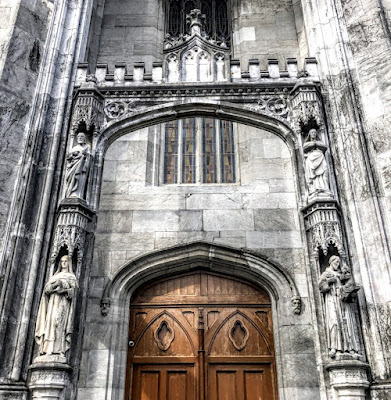 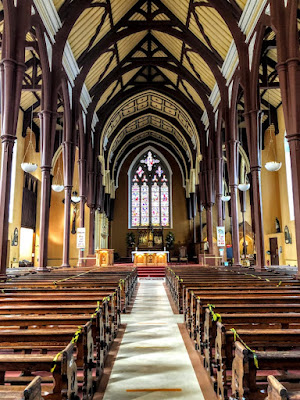 Inside the church, facing the liturgical east (Photograph: Patrick Comerford)

The Prayer in the USPG Prayer Diary today (17 October 2021, Trinity XX) invites us to pray:

Caring God,
you sent Jesus to serve,
not to be served.
May we serve our communities,
and be humble in doing so. 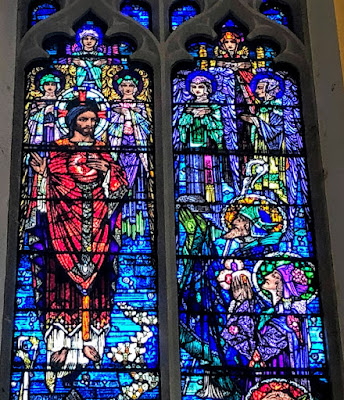 The Sacred Heart depicted with angels and saints in a Harry Clarke window in the Father Mathew Memorial Church (Photograph: Patrick Comerford) 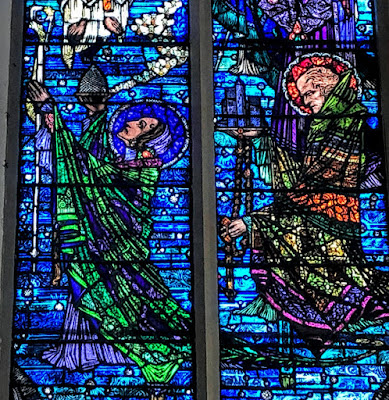 Saints in one of the Harry Clarke Windows in the Father Mathew Memorial Church (Photograph: Patrick Comerford)