The bishop whose effigy
survived the destruction
of Coventry Cathedral

The effigy of Bishop Huyshe Wolcott Yeatman-Biggs, first Bishop of Coventry, in the ruins of Coventry Cathedral (Photograph: Patrick Comerford, 2021)

Coventry Cathedral, the ministry of the Community of the Cross of Nails, and the Coventry Litany of Reconciliation, had strong influences on my spirituality and my prayer life in the 1970s and 1980s, and during last week’s visit to Lichfield it seemed a good idea, after an absence of 10 years, to visit Coventry Cathedral one afternoon, to visit the old cathedral destroyed in the bombing of Coventry in 1940, and to sit the stalls of the New Coventry Cathedral, built in the 1960s, for Choral Evensong.

Coventry Cathedral emerged as the cathedral of a new Diocese of Coventry as formed in the closing days of World War I, and as destroyed in the horrific bombing of Coventry just over 20 years later as World War II intensified in 1940.

Strolling around the ruins of the old Coventry Cathedral, it was surprising then to see swastikas among the symbols on the mitre of Bishop Huyshe Wolcott Yeatman-Biggs, the first bishop of the modern-day Diocese of Coventry.

Yeatman-Biggs was born at Manston House, Dorset, on 2 February 1845, the younger son of Harry Farr Yeatman and his wife Emma, daughter and heiress of Harry Biggs. He was educated at Winchester College and Emmanuel College, Cambridge, where he was a Dixie Scholar.

He was vicar of Netherbury (1877-1879) and then of Sydenham (1879-1891), and an honorary canon of Rochester before becoming Bishop of Southwark in 1891. He was consecrated in Saint Paul’s Cathedral, London, on 29 September 1891, by Archbishop Edward Benson of Canterbury. At the time, Southwark was not a separate diocese, and Yeatman was a suffragan bishop in the Diocese of Rochester.

He inherited the estate of his brother, Arthur Godolphin Yeatman-Biggs, in 1898, and, as the heir of his maternal grandfather, he assumed the additional name of Biggs.

Yeatman-Biggs was in Rochester for 14 years before becoming the 105th Bishop of Worcester in 1905 in succession to Charles Gore, who had become Bishop of Birmingham. Yeatman-Biggs also became an honorary fellow of Emmanuel College, Cambridge, that year.

As Bishop of Worcester, he forged close links with the Episcopal Church in the US. His wife, Lady Barbara, died in 1909, and he later erected the King’s Stag Memorial Chapel in Dorset in her memory. 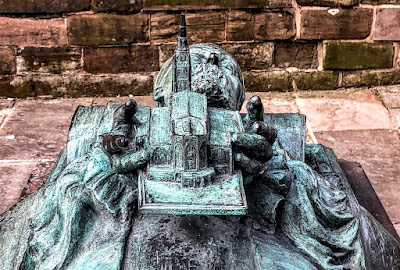 During World War I, Yeatman-Biggs turned his official residence, Hartlebury Castle, into a rest home for wounded soldiers. Coventry was then part of the Diocese of Worcester, and he stayed in Coventry in July 1917, when he noted the influx of munitions workers, including 7,000 women working in one factory.

At the end of World War I, he made it clear that those who had been killed should be honoured equally, without distinction between the officers and other ranks.

As World War I was drawing to a close, a new Diocese of Coventry was formed out of the Diocese of Worcester on 6 September 1918, and Yeatman-Biggs became the first bishop of the new diocese.

Yeatman-Biggs died on 2 July 1922, and was buried in the old Coventry Cathedral. His bronze effigy is the work of the sculptor Sir William Hamo Thornycroft (1850-1925). In his hands, the bishop is holding a replica of Coventry Cathedral.

It is interesting that his effigy at the north side of the east end of the old cathedral was the only artefact to survive more or less intact during the bombing of Coventry Cathedral in 1940. Who could have known in 1922, that a simple symbol that is innocently displayed on the mitre of a bishop could come to represent the evils of racism, anti-Semitism, hatred and war? 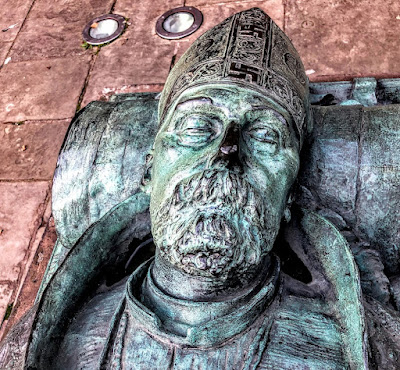 Swastikas can be seen on the bishop’s mitre on his effigy in Coventry Cathedral (Photograph: Patrick Comerford, 2021)