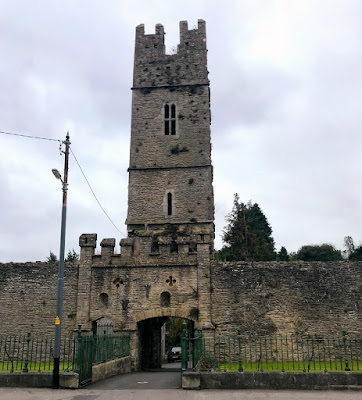 My theme for these few weeks is churches in the Franciscan (and Capuchin) tradition. My photographs this morning (22 October 2021) are from the ruins of remains of the Franciscan Friary on Abbey Street, Roscrea, Co Tipperary. 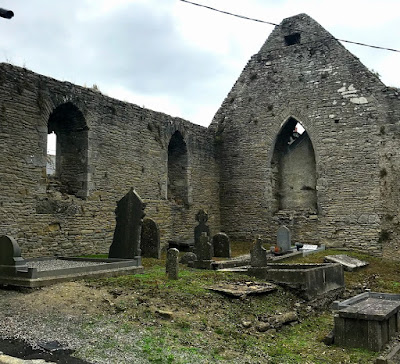 A window in the friary ruins is partly blocked by a modern house (Photograph: Patrick Comerford)

Roscrea has a rich collection of ecclesiastical sites, including the two parishes churches, both named after Saint Cronan, the Romanesque remains, High Cross and round tower that have survived from the ancient monastic site, the ruins of a Franciscan friary, and Saint Joseph’s, the Cistercian abbey and school across the country boundary in Co Offaly.

Roscrea’s two parish churches – Church of Ireland and Roman Catholic – are both named after Saint Cronan, stand close to the early and mediaeval monastic sites, and were easy to find although they stand some distance from each other.

Saint Cronan was said to have founded his monastery in the year 610, but the Franciscan Friary is a much later, mediaeval arrival in Roscrea.

The ruins of the former Franciscan friary now form a National Monument and stands on Abbey Street at the west end of Roscrea, on the north bank of the River Bunnow.

The friary was founded in the 15th century, sometime before 1477, by the Greyfriars or Franciscans of the Order of Friars Minor Conventual, with the patronage and support of Maolruanaidh Ó Cerbaill (Mulrooney O’Carroll, King of Ely O’Carroll, and his wife Bibiana (Dempsey).

The friars in the Roscrea revolted in 1477, and the friary was destroyed. A second friary was built on the ruins of the earlier foundation, and it was reformed around 1490 for the Order of Friars Minor, and the present buildings date from that period.

Two or three decades after the dissolution of the monastic houses at the Reformation, the friary was dissolved around 1577-1579, the friars fled Roscrea and the buildings were destroyed. The friary lands were granted to Connor O’Brien, 3rd Earl of Thomond, who leased them to William Crow. Father Thady O’Daly, who escaped to Limerick, was captured and hanged there.

Very little remains of the friary buildings except for friary buildings are the north and east walls and the central bell-tower. The bell-tower is two storeys high and is crenellated. It is carried on pointed arches that have a chamfered soffit order, on moulded corbels.

Fragments of carved stones and window tracery are now mounted on the walls, including a once beautiful pointed, mullioned and transomed, traceried window that has been partially blocked by a modern house that has been built onto the east gable.

The windows in the north wall are well made and are both twin-light ogee headed with hollow spandrels. Some remains from the cloister have been cemented in the remains of the bell-tower and north wall.

Some of the friary stone may have been used to build a new, cruciform Roman Catholic parish church, built in 1843-1855.

Saint Cronan’s Roman Catholic parish church was designed by William Deane Butler (ca 1794-1857), who was also the architect of Saint Kieran’s College, Kilkenny, Saint Patrick’s Church, Ballyragget, and the parish churches in Castlecomer and Freshford while he was the resident architect for the Diocese of Ossory.

Work on building the church began around 1843 when the foundation stone was laid. But this work came to a halt during the Famine, and the church was not dedicated until 19 October 1855. Dean died in 1857, and the interior of the church was finished in 1860 by Butler’s son, John Sterling Butler. The total cost was £10,000, and the contractors were Hogan & Son.

The architect John Sterling Butler was born ca 1816 and was apprenticed to his father. He was appointed Dublin City Architect on 1 October 1866, in place of Hugh Byrne, and was also architect to the Mendicity Institution (1867-1873). But he was forced to resign as City Architect in 1878 for a serious misdemeanour, although the details remain unclear. In his letter of resignation, he asked ‘the council to believe that, though sinning, I have been sinned against.’ When and where he died is not recorded.

The architect James Joseph McCarthy, often regarded as Pugin’s successor in Ireland, designed the three altars. These are the work of Earley & Powell of Dublin and were consecrated on 19 September 1869.

The stained-glass windows in the church are mainly the work of Mayer of Munich and Earley of Dublin.

The architects Ashlin and Coleman carried out renovations on the exterior in 1906, work on a new sacristy and decoration in 1915, when the contractor was Joseph Day of Roscrea, and fresh plastering in 1924. John Hardman & Co designed a stone and metal jubé screen.

This cruciform church has a gable-fronted, six-bay nave with side aisles, two-bay transepts, a single-bay chancel with bow-plan apse at the east and an L-plan sacristy at the south-east.

Outside, the architectural details of the church include a shallow, gable-fronted porch with a statue over it, polygonal turrets, crenellations, spirelets, stone cross finials, modillions, elegant buttresses, trefoil-headed and lancet windows, round and pointed-arch windows with hood-mouldings, and timber battened double-leaf doors with stone hood-mouldings.

Inside, the church has an arcade of polygonal columns supporting pointed arches, a roof of braced wooden trusses with decorative cast iron to the spandrels, an ornamental marble screen in the apse, and a carved stone reredos that forms a decorative focus for the church.

The church stands on a landscaped rising site, and the ruins of the mediaeval friary nearby add archaeological interest to this site. 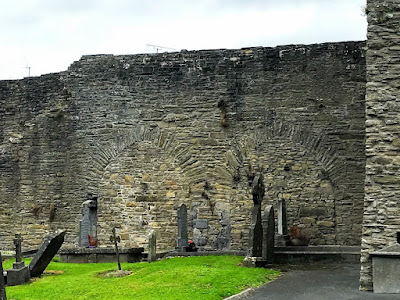 Some remains from the cloister have been cemented in the remains of the bell-tower and north wall (Photograph: Patrick Comerford)

54 [Jesus] He also said to the crowds, ‘When you see a cloud rising in the west, you immediately say, “It is going to rain”; and so it happens. 55 And when you see the south wind blowing, you say, “There will be scorching heat”; and it happens. 56 You hypocrites! You know how to interpret the appearance of earth and sky, but why do you not know how to interpret the present time? 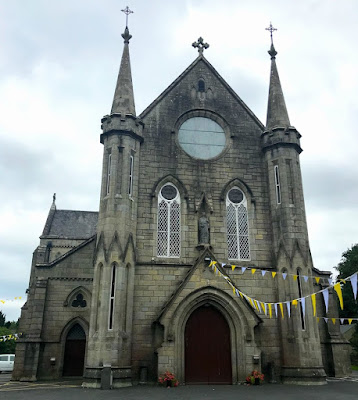 
The Prayer in the USPG Prayer Diary today (22 October 2021) invites us to pray:

We confess our own prejudice concerning those of other races, and we ask the grace of God to challenge racism in ourselves and in others. 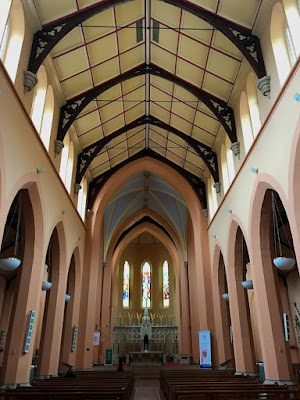