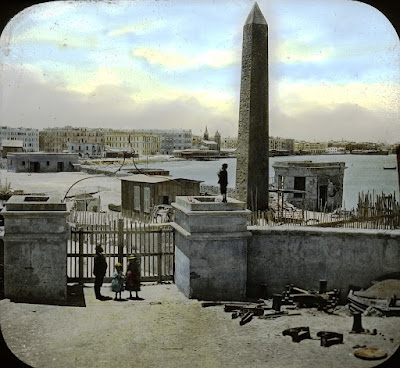 The Obelisk in Alexandria in the early 20th century … the Comerford-Kneen family lived in Alexandria for four or five generations (William Henry Goodyear, Brooklyn Museum Archives)

It is a story that begins with a marriage in Limassol in Cyprus in 1882, and that brings the Comerford name to Alexandria and Cairo in Egypt, Limassol in Cyprus, Kavala and Thessaloniki in northern Greece, Nairobi in Kenya and to Mexico City and Australia. There are hints of minor aristocracy in Croatia and Slovenia, of descent from families in Romania and Lebanon, and of Egyptian, Syrian, Maltese and Jewish heritage. But it also involves places from the Isle of Man to Liverpool and through many parts of England.

It is a family whose story has inspired the Australian writer Krissy Kneen in her semi-biographical stories of Slovene women who became the nannies of choice for the wealthy Italians of pre-war Alexandria in The Three Burials of Lotty Kneen: Travels with My Grandmother’s Ashes, a new book published earlier this year (May 2021).

I am still researching this story of the Comerford and Comerford-Kneen family, and I remain uncertain of many of the genealogical details. But it begins with Helen Pauline Comerford who is in Limassol when she marries John Bernard Kneen from Liverpool who is living in Liberpool in 1882, and I thought it was worth sharing some of my research at this stage.

Sarah and John Kneen were the parents of four children:

John Kneen married his second wife, Helen Pauline Comerford, in Limassol, Cyprus on 14 April 1882. She was born ca 1844 and they were the parents of six children, four sons and two daughters:

1, Charles Albert Comerford Kneen. He was born in Aleaxandria and lived in Egypt (1939), Blacktown, Sydney, New South Wales, Australia (1963-post 1980). He married Dragitca (Dragica) Marušič, born in Miren, near Nova Gorica or Gorizia in Slovenia, 13 December 1916, daughter of Perina and Carlotta (née Mozetic) Marusic. He worked at the British Embassy in Cairo. They fled Alexandria in the aftermath of the 1956 Suez Crisis with other expatriates, and lived in England before moving to Australia. In Australia, Dragitca was known as Lotty Kneen, and died in 2014. They were the parents of two daughters: Sheila; Wendy who is the mother of the Australian writer Krissy Kneen.

The second son of Helen (Comerford) and John Bernard Kneen was:

The Comerford name was continued among the children of the only daughter and only surviving child of Edith and Paul Comerford-Kneen:

Helen Alice Pauline Comerford-Kneen (1910-1976). She was born in Alexandria on 12 June 1914, and died in Norwich in December 1976. She was married twice. She married first in Alexandria on 12 January 1935 Paul P de Relya (1912-1981), also known as Paul Ivo Ritter von Relya Ohmucevic (or Reglia von Ohmucevic). He was born in Kavala, east of Thessaloniki in northern Greece, on 2 October 1912, into a family of Croatian ancestry, and died in Hounslow in December 1981. They later moved to Liverpool and were the parents of six children, three daughters and three sons:

The third son and fourth child of Helen (Comerford) and John Bernard Kneen was:

The fourth and youngest son and fifth child of Helen (Comerford) and John Bernard Kneen was:

Victor Comerford-Kneen (1892-1953). He as born in Alexandria in 1892, and was married twice. He married firstly in Alexandria on 8 November 1913 Victoria Mallia and they were the parents of:

Victor Comerford-Kneen married a second time before he died in Nairobi, Kenya, on 20 June 1953.