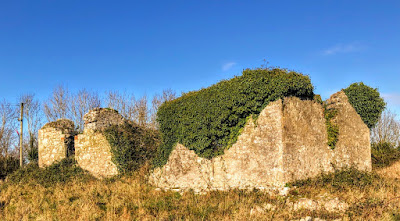 The former famine or fever hospital in Askeaton was set up to take care of the dying and the very ill during the Great Famine (Photograph: Patrick Comerford, 2022)

I was invited this week to be part of a group working on a new brochure and tourist guide to Askeaton, Co Limerick. During a meeting in the Civic Trust offices earlier this week, I learned about the ruins of the famine hospital, and went in search of them mid-week.

After hearing about the Famine Hospital, I went in search mid-week for the hospital ruins in Cloonreask townland, where they are fenced off behind the Deel Manor estate.

Askeaton suffered through the Great Famine, although there are few tell tales of famine times apart from the memory of the old hospital where patients were treated during the famine. The famine or fever hospital was set up to take care of the dying and the very ill.

It is said locally that before the Famine, this building was a treatment centre and a home for people suffering from leprosy. It seems that leprosy may have occurred in the Askeaton area, and a stream near the four roads also refers to leprosy – Lochan Lobhar, or the ‘Lepers’ Pond.’

The population of Askeaton in 1841, four years before the Great Famine, was 1,862. However, 40 years later, the population in 1881 was 804, and today it is about 1,137. The figures tell ting graphically how Askeaton, once a walled borough electing two MPs to the Irish Parliament, has never fully recovered from the impact of the Great Famine.

The ruins of the Famine hospital can still be seen on the main Askeaton bypass, opposite the turn off to the Wyeth plant and they are fenced off from the Deel Manor estate.