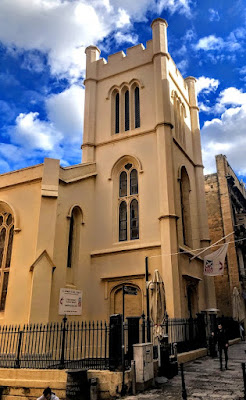 I was in Valetta last week, where it seems as though every street – or every second street – inside the walls of the capital of Malta, is named after a saint. Later this morning, I am preaching at Morning Prayer in Castletown and presiding and preaching at the Parish Eucharist in Rathkeale.

This week, I am continuing to reflect on saints and their association with prominent churches or notable street names in Malta, which I visited last week. This morning (23 January 2022), I am reflecting on Saint Andrew, who gives his name to Saint Andrew’s Church on South Street, the same street as the Osborne Hotel, where I was staying last week. 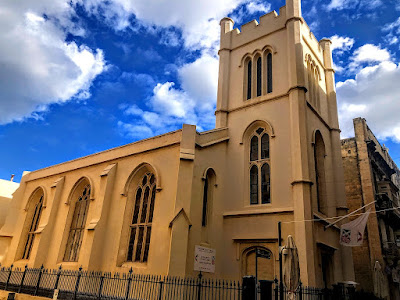 Saint Andrew’s Church, or the Scots Church, is a 19th-century church built to a neo-gothic design by the Maltese architect Giuseppe Bonavia, the first neo-gothic building on the Maltese islands, standing out from the Baroque buildings that surround it.

Saint Andrew’s is a joint congregation of the Church of Scotland, as part of the Presbytery of Europe, and the Methodist Church, South-East District, England.

The site was later acquired by the Church of Scotland for the Presbyterian community in Malta. The present church was commissioned in 1854 by the Revd Dr George Wisely and was designed by the Maltese architect Giuseppe Bonavia (1821-1885).

Bonavia was born in Valletta, and first worked as a clerk of works with the Royal Engineers, before becoming the Head of the Civil Service Works Department. He worked in a variety of styles, including Gothic Revival and Neoclassical architecture, mainly in the 1850s and 1860s. Saint Andrew’s (1854) was the first Gothic church built in Malta, while Bonavia’s masterpiece is La Borsa or the Exchange Buildings (1857).

Bonavia also drew up plans for the proposed Royal Opera House in 1859, but eventually the building was built to designs of the English architect Edward Middleton Barry.

Wisely was minister of Saint Andrew’s and Presbyterian chaplain to the British forces in Malta from 1854 to 1894. He also built a manse beside the church.

Since the turn of the 20th century, the church has a mixed congregation that includes Presbyterians, Methodists, other Protestants, and some Catholics. Ministerial appointments alternates between Methodist and Presbyterian ministers. The Revd Colin Westmarland, who was the minister from 1975 to 2002, was the first minister not to be a British military chaplain.

Saint Andrew’s sees its work among the poor and the marginalised as a vital part of its ministry. It runs Malta Microfinance, ‘Blue Door English’ Language Classes for migrants, and support missions in Malta and beyond, including an HIV/AIDS community in Zambia run by a Maltese nun. 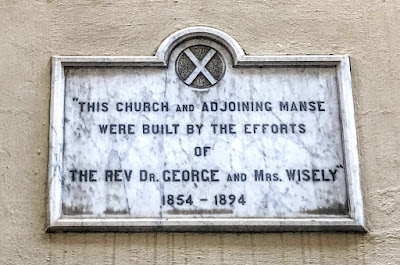 20 And he rolled up the scroll, gave it back to the attendant, and sat down. The eyes of all in the synagogue were fixed on him. 21 Then he began to say to them, ‘Today this scripture has been fulfilled in your hearing.’

The Prayer in the USPG Prayer Diary today (23 January 2022) invites us to pray in these words:

Liberator God,
you teach us to resist oppression,
lift up the disadvantaged
and centre the marginalised.
May we always pursue justice. 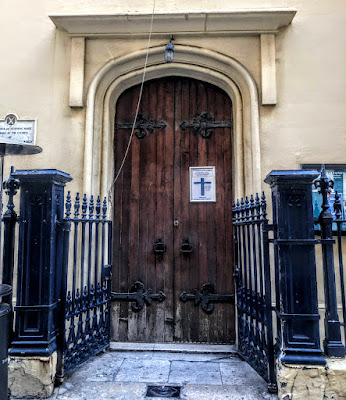 Saint Andrew’s sees its work among the poor and the marginalised as a vital part of its ministry (Photograph: Patrick Comerford, 2022) 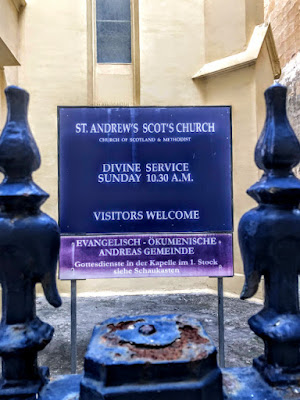 Saint Andrew’s Church has a mixed congregation that includes Presbyterians, Methodists, other Protestants, and some Catholics (Photograph: Patrick Comerford, 2022)