The Augustinian Church, Galway
its stained-glass windows
and its liturgical innovations 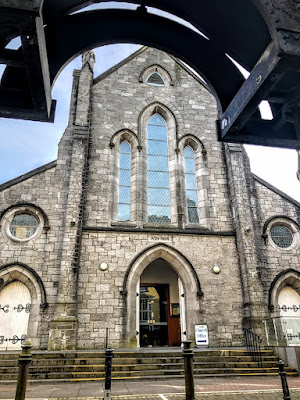 During a recent visit to Galway, I wanted to see the Augustinian Church on Middle Street, one of the few remaining church designed by the Dublin architect, Michael Brophy Moran, who also designed the Church of Saint John the Baptist, which I had visited in Ballyvaughan, Co Clare, a week or two earlier.

I also wanted to see the Resurrection window above the high altar, the work of the stained-glass artist George W Walsh.

The Augustinians built their first church in Galway in 1500, just outside the city walls, on the site of the present Forthill Cemetery. During the Tudor Reformation, the friars’ lands were confiscated in 1546, and the Augustinians moved to a site in Market Street, Galway.

The Augustinians spent the next 100 years wandering between Forthill and various ‘safe havens’ in the city. Then, in 1760, they established a church near the site of the present church. 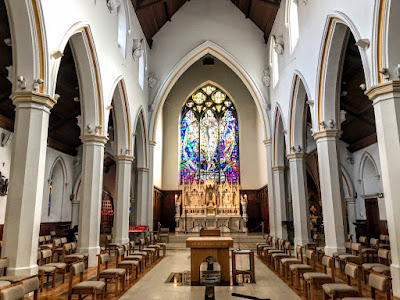 Almost a century later, work started on the building present Gothic Church in 1855 with help from the Galway historian, James Hardiman, who laid the foundation stone on 28 August 1855.

Moran was admitted to the Royal Dublin Society’s School of Drawing in Architecture in 1847He was also one of the 13 entrants in the competition to design Rathgar Presbyterian church in 1860, and he also designed two churches for the Roman Catholic Diocese of Melbourne in Australia.

Saint Augustine’s Church in Galway presents imposing limestone elevations to Middle Street and Saint Augustine Street, and also presents its side elevation to Buttermilk Walk, enlivening all three thoroughfares. The clasping buttresses at the gable ends and the sculpted details and the stained glass add artistic interest to the immediate area.

James Hardiman was deeply involved in the building project. Galway limestone, quarried from the Angliham and Menlo quarries about 3 km outside the city, was used in its construction. This neo-gothic church took four years to complete and it opened for worship on 4 September 1859. Since then, the church has undergone a number of renovations.

The High Altar was erected in 1934 with a bequest of £7,000 from the mother of a Father Guiney OSA from Athlone. Carved on the left panel is a scene from the life of Saint Augustine. The death of Saint Augustine’s mother, Saint Monica, is depicted on the right panel. 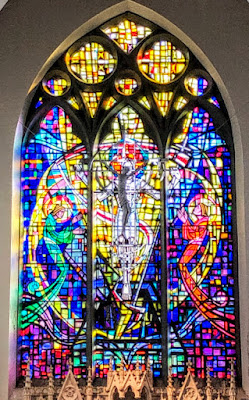 During the renovations in the 1970s, the original window over the High Altar was replaced by the stained glass representation of the Resurrection. The artist was George W Walsh from Dublin who completed the work in August 1968.

Walsh returned to Ireland from the United States in the early 1960s and he joined the Abbey Stained Glass Studios with Frank Ryan and William Earley. His work there includes windows in the Church of the Guardian Angels, Blackrock, Saint Augustine’s Church, Galway, the chapel in NUI Galway, and a three-light window in the Church of the Immaculate Conception in Lahinch, Co Clare.

The altar rails were presented to the church by George Comyns Davenport and family, Rosshill, Co Galway, in the late 1920s. 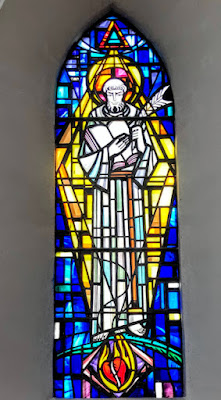 Oak panelling surrounds the high altar and dates from 1855, although some alterations were made in the late 1960s and early 1970s. The tabernacle, dating from 1969, was enshrined and the stained glass window over the main altar was replaced.

The ceiling was also rebuilt with cedar wood, although the ancient roof supports still remain.

The organ was built and installed by the Dublin organ builder William Telford in 1868. It was renovated, cleaned and rebuilt by Paul Neiland and Associates in 1992.

The Stations of the Cross were originally oak-frame and were presented by members of Old Galway Tribal families when the church was originally built.

To the right of the main altar is the Shrine to Our Lady of Good Counsel, a common feature in all Augustinian churches. The shrine was erected in the 1940s by the then prior, Father Farragher.

The church are also shrines to two famous Italian Augustinian saints, Saint Nicholas of Tolentine (10 September) and Saint Rita of Cascia (22 May).

The double shrine at the left towards the back of the church, of Saint Joseph and the Pieta, date from the foundation of the church. The Pieta was donated by a Mr and Mrs Kelly. On the right hand side is a statue of Saint Augustine and on the left side through a doorway is a shrine to Saint Jude.

The Augustinian logo on the mosaic floor includes the Latin motto Tolle Lege (‘Take up and Read’), which comes from a discussion with Saint Augustine after he read Saint Paul’s Letter to the Romans. 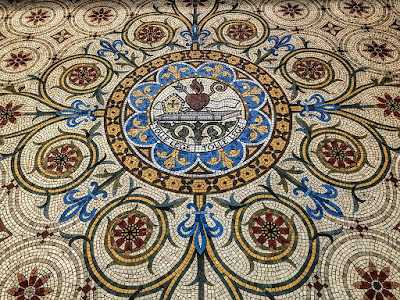 The Augustinian logo on the mosaic floor, with the Latin motto ‘Tolle Lege’ (Photograph: Patrick Comerford, 2022)

Although the old interior was much loved, it had the disadvantage of reflecting a 19th century vision of Catholicism: that of a sanctified priesthood and a passive people – a view of the Church that is no longer relevant to today’s laity or clergy. .

What became known as the Augustinian Project looked not only at changes to the church’s interior but at how to develop a better sense of spirituality and social interaction in Galway city, greater participation by the lay community, and the future of the church and its community.

The church’s new ‘antiphonal design’ has both a practical and symbolic effect, creating a welcoming entrance sequence and presenting the conviction that the people too are sacred. It is also a more effective use of space that is user-friendly with the removal of barriers and being available as a venue for recitals and plays.

Work started in March 2005, when the Augustinian priests and their congregation moved to Saint Nicholas’ Collegiate Church to share the Church of Ireland parish church. This sharing has strengthened ties and created new friendships. The event was marked by a candle-lit procession from Saint Augustine’s to Saint Nicholas’, with clergy and laity from both churches. 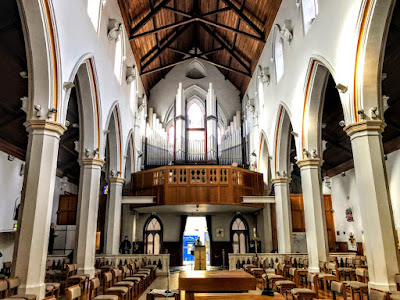