Stopping in Ballyvaughan,
Co Clare, to see the Church
of Saint John the Baptist 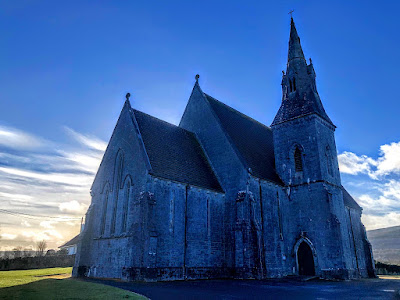 During my recent ‘road trip’ through Co Galway and Co Clare earlier this month, after visiting the Comerford Mausoleum at Drumcreehy, near Ballvaughan, Co Clare, I stopped to visit the Church of Saint John the Baptist, the Roman Catholic Church on Lisdoonvarna Road, Ballyvaughan.

Ballyvaughan is on the north side of the Burren, looking out onto Galway Bay. Saint John the Baptist, Ballyvaughan, and Saint Patrick’s Church, Murrough, Fanore, are united in one parish in the Kilfenora Deanery of the Diocese of Galway, Kilmacduagh and Kilfenora. The parish is an amalgamation of the former parishes of Drumcreehy, Gleninagh, Kilonaghan and Rathborney.

The Church of Saint John the Baptist in Ballyvaughan was built and twice rebuilt after damaging storms in the period 1858-1866.

The foundation stone was laid by Bishop Fallon in 1858. The church was knocked down in 1862 and again in 1863. The parish priest, Father Forde, then went to Australia to collect money for rebuilding Saint John’s and he managed to complete the church in 1866.

This Gothic Revival church was designed by the Dublin architect Michael Brophy Moran, whose only known works are Catholic churches.

He was also one of the 13 entrants in the competition to design Rathgar Presbyterian church in 1860, and he also designed two churches for the Roman Catholic Diocese of Melbourne in Australia.

A new marble altar and communion rail were erected in the church in Ballyvaughan in 1938, and the walls and floor of the sanctuary were finished in mosaic. A general renovation of the nave, roof and tower was carried out in 1942, and the church was given a new roof in 1985. 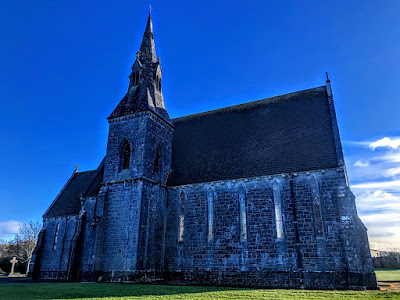 The Church of Saint John the Baptist, Ballyvaughan, was designed by the Dublin architect Michael Brophy Moran (Photograph: Patrick Comerford, 2022)

Saint John’s is a double-height Gothic Revival church, with eight-bay side elevations, a gable-fronted three-bay chancel, a two-bay single-storey sacristy anda two-stage entrance tower and spire. The church has a pitched concrete tile roof with gable copings, finials and cast-iron downpipes. There is a cut-limestone spire with lucarnes, snecked limestone walls with stepped buttresses, a string course, eaves dentils and some hood mouldings. There are pointed arch windows with cut-limestone dressings and cast-iron quarry clear and coloured glazing. Retaining interior features.

The graveyard has a number of cut-stone grave markers, and there are cut-stone piers at the front with cast-iron gates and railings.

On my visit two weeks ago, I did not manage to get to see inside Saint John’s Church, which was given a recent facelift when the generosity of an anonymous donor made funds available to install new stained-glass windows.

The Dublin-born artist Manus Walsh, who has been living in Ballyvaughan for more than 40 years, was approached by local parish priest, Father Richard Flanagan, with a view to designing the new stained-glass windows.

The broad theme for the design of the new windows was a reflection on Pope Francis’s encyclical, Laudato Si, on care for the common home and the environment. In his work, Manus Walsh incorporated portions of Genesis, the creation and the environment of the Burren. Aria Glass in Cortoon, Galway, helped to bring Manus Walsh’s vision to life, and Marija Kovak, an artist from Serbia, did the painting and leading.

Manus Walsh has worked in the Abbey Stained Glass Studios in Dublin and designed the Michael Green memorial window in Saint John’s, commemorating Michael and Mary Green who founded the Burren College of Art. He has five windows in Galway Cathedral, dating from the 1960s.

Although I did not get inside Saint John’s to see these windows, I was impressed by a notice at the church door:

‘However trying we find Saint Paul’s views on sex or the role of women, his definition of agape (love) is incomparable; that which is patient and kind does not envy others, is not quick to take offence, keeps no score of wrongs, takes no pleasure in the sins of others, delights in the truth. The opposite of love is not hate but indifference, the failure to care, or to care enough. It is a want of imagination, a lack of empathy, an inability or a refusal to see in another human being a creature as frail and as easily hurt as I can be.

‘When someone is troubled, sick or dying, the caring love of people who also know themselves to be vulnerable.’

In the churchyard in Ballyvaughan, Co Clare (Photograph: Patrick Comerford, 2022)