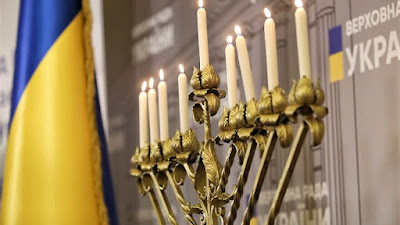 The Ukrainian flag and Menorah lit in the Ukrainian Parliament in Kyiv, during a pre-Hanukkah ceremony

On this Friday evening, I am thinking of the plight – but also the cultural legacy – of the Jewish community in Ukraine, including the traditions and songs of the Chassidic movement.

The early Chassidic movement attributed profound importance to the power of music. ‘If words are the pen of the heart,’ taught Rabbi Schneur Zalman of Liadi, the founder of Chabad Chassidism, ‘then song is the pen of the soul.’

The regions of Volhynia and Podolia, west of Kyiv, were the birthplace of the Chassidic movement. Throughout history, the Jews of what is now Ukraine have been the victims of successive waves of violent pogroms.

Tens of thousands of Jews were massacred in one of the worst pogroms during the violent peasant uprising led by Bogdan Chmielnicki in 1648-1649. Jews of the region were left in despair.

In the wake of these attacks, Rabbi Yisrael Baal Shem Tov founded the Chassidic movement in the region began to reveal his teachings, to raise the spirits of a broken nation.

Successive generations of Chassidic leaders left their mark on Ukrainian Jewry. Historic Jewish communities in the west, and newer Jewish agricultural colonies in the Kherson region to the east, became home to millions of Jews. These communities have survived pogroms, the Holocaust, and the Soviet Union to form the vibrant Jewish community that is found in Ukraine today.

The songs of the Jews in the region are adaptations of Ukrainian peasant songs. Often, they have been mined for meaning and elevated through application; some are wordless original compositions; all can uplift the soul to profound heights. Cities such as Nikolayev and Kremenchug spawned not only prominent composers of Chassidic melodies, but entire genres of Chassidic music.

On this Shabbat evening, I am listening to Nigun Hakafot, attributed to Rabbi Levi Yitzchok Schneerson (1878-1944), Chief Rabbi of Yekaterinoslav (Dnipro), the Rebbe’s father.

This is a spirited rhythmic march in three stanzas, sung on the holiday of Simchat Torah. The melody has its origins in the time of the first Chabad Rebbe, Rabbi Shneur Zalman of Liadi, who lived in what is now Belarus. However, it has become inextricably linked to Rabbi Levi Yitzchok and his legacy of sacrifice for Jews in the Soviet Union.

He was fearlessly defiant in strengthening Jewish learning and practice in his city and throughout the Soviet Union. Rabbi Levi Yitzchak was eventually arrested, tortured, and subsequently banished to exile in a remote village in Kazakhstan. His spirit, however, was not extinguished, even while his body was broken and eventually gave way to his early death in 1944.

His son, the Lubavitcher Rebbe, Rabbi Menachem Mendel Schneerson (1902-1994), known popularly as ‘the Rebbe,’ was the seventh leader of Chabad-Lubavitch, and lived in Nikolayev and Dnieperptrosk (Ukraine), Leningrad, Berlin, Warsaw, Paris and New York. He built upon and expanded his predecessors’ work to revolutionise Jewish life across the world.

Although this song originally associated with the Hakafot of Simchat Torah, the Rebbe would often request that it be sung throughout the year, as it remains popularly sung by Jews of all backgrounds today.

The article you've shared here is fantastic because it provides some excellent information that will be incredibly beneficial to me. Thank you for sharing that. Keep up the good work. Housing for Ukrainian Refugees In Canada